As a photographer and lover of old devices, I do not think I could have found a better container for my new PirateBox.

I found this old Brownie Camera at Granny’s Antiques in Payson; I was looking for a small interesting container for this small router and power supply (it was almost in a wooden card holder or a rusted recipe box). Ironically, when I got home I realized I already had one up on my old camera shelf.

When I first tries to slip the router in, it did not fit! I then figured out (a bit of prying with a screw driver), I could pop out the film holder, leaving a perfect sized space for the router. The little power supply (a re-chargable cell phone power supply) fit in okay, but with the USB plug on the end, the camera door will not close. I ordered a new smaller square unit (it almost matches the router) that should fit in. I left the battery on and it was still powered up after 6 hours (probably less when it is active). I might pop out the window of the film counter, so I could slip the cable out to connect to AC if necessary. But I like it closed up with no indication of what is inside.

PirateBox creates offline wireless networks designed for anonymous file sharing, chatting, message boarding, and media streaming. You can think of it as your very own portable offline Internet in a box!

Originally developed by David Darts at NYU as a means to get around sharing large media on school networks, he later discovered the anonymity created interesting effects when set up in public places (an “artistic provocation”). I came across it in 2011 when prepping for my round the North America tour– Zack Dowell asked me if I would travel with one if he built it for me.

Thus, mine became a StoryBox 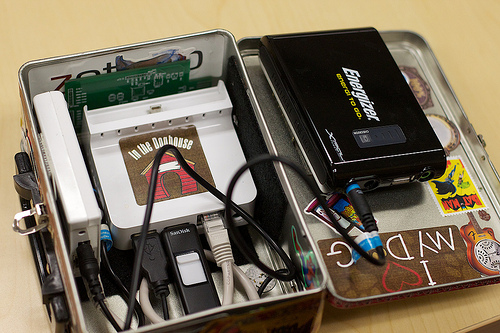 I later managed to build a few myself, one for Nancy white to travel with to African, and another one for the Open Education 2012 conference as a “TreasureBox” 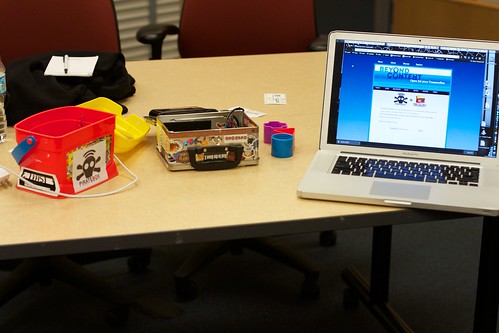 I’m still intrigued by the idea of what Jim Groom aptly described as a “digital time capsule”. It acts like the internet, but is not on the internet, so it is something of a collector of ephemeral digital media, rather than the kind that lasts forever online.

There has been a lot of progress with the software, led by the relentless developer Matthias Strubel and the evolution of the forked version in Jason Griffey’s LibraryBox. The installation process is much easier (no fiddling with routers), and new features include a media server, a capability of running PHP, and more I need to discover. There are versions that run on USB sticks, laptops, android devices, and the Raspberry Pi.

I’m working on creating this new StoryBox for an upcoming (late September – early October) visit to New Zealand. I will be doing workshops at several places around the North Island, and I see some opportunity to set up some activities to have people experience the sharing of media with no context. That was some of the more interesting experiences when traveling with it, sitting down with people (usually in their homes) and having them explore photos, audio, video, and documents which have no context beyond a file name. It leads to discussions and interpretations, making connections… all story stuff.

The thing I found it really needs are good prompts for a visitor to spark ideas what to share; that is what I am working on now (as well as trying to get in an edit some of the interface, still a bit of a dance to figure out).

Look for some updates at http://cogdogblog.com/storybox.

In a way, it somewhat parallels, but maybe in a distorted fashioned, the notions of surveillance Jim and Paul are working with in the ds106 version based on The Wire.

And, I still have the lovely PirateBox song written and performed by @onepercentyello

All The Pirates Get in the Box