It starts, as often it does, with a tweet…

Audrey’s series on The History of the Future of Education is more than book worthy.

In her latest, The Automatic Machine, Audrey takes us more into this past future history. I’ve read previous bits by her about Sidney Presser and claims for inventions of machines that teach (wikipedia quote):

“The first.. [teaching machine] was developed by Sidney L. Pressey… While originally developed as a self-scoring machine… [it] demonstrated its ability to actually teach”

I was really sucked in by the embedded video where Pressey explains (standing in front of a classroom of passive students) the Teaching Machine in 1964:

Thirty-eight years after the description Audrey quoted, his explanation of how it works and what it does has barely change. The only new feature is the ability to trigger an award, a piece of candy for a correct answer. The woman’s expression is priceless when she presses the right key and gets a candy: 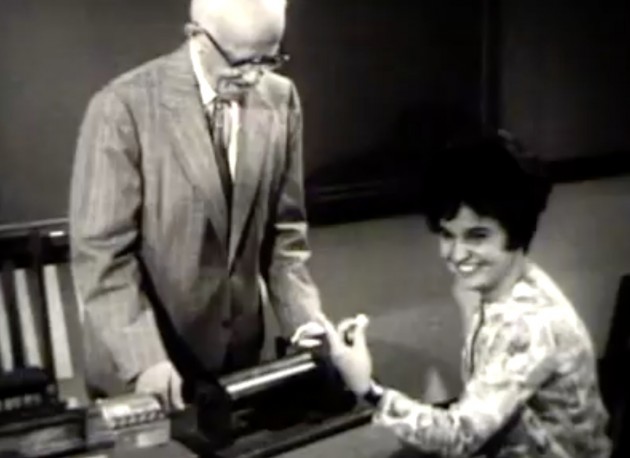 “We give Tums now. We used to use Lifesavers, but they are too big now to fit this machine.”

Thirty-eight years to work on technology, and still foiled by bugs and lack of standard sizes assessment rewards.

And than that tickling. I had to make a remix with this classic video. My idea was to find a modern talk about MOOCs, and put its audio to Pressey’s video. It would be easy since since you talks continuously, and you cannot really see the movement of his mouth, so keying to his motion was not needed.

I searched in YouTube for “MOOC” and “assessment” and found very little. Oh well. I was about to use Daphne Koller’s 2012 TED Talk on What We’re Learning from Online Education — there would be some humor in her voice coming from Pressey. Her talk is eighteen minutes, so finding two and a half would not be too hard, especially where she talks about what they are doing.

But I went back to the YouTube well, and one or two links in a sidebar was EdX’s Anant Agarwal TED Talk (we know what TED talks about a lot) on Why Massively Open Online Courses (still) Matter. There was a spot about nine minutes in he is talking about the virtues of learning online, self-paced, and talks about the student’s excitement over the “green checkmark”.

So here is the final. I got lucky because the phrasing and timing worked out really well; as Agarwal talks about videos and interactivity, Pressey is handling the Teaching Machine. It ended up pretty damn good according to my MOOC Mocking standards.

I present “The MOOCing Machine”:

And now, for the pay I am continually trying to advocate in everything from ds106 to the You Show — the making part.

I use the extension in Chrome from SaveFrom.net to download both videos as mp4 videos, and import them into iMovie.

The key for this stuff is knowing how to separate the audio and video tracks. I put the Pressey sequence in first, and use Modify -> Mute Clip to remove the sound (muting is handy as I can un-mute it if I need to hear the original track to match to something else).

I then select the segment of the Agarwal clip that’s close to what I need (it need not be precise since I can adjust the in and out points in the timeline) and drop it in after the Pressey one. Select that clip and use Modify -> Detach Audio. This is what separates the audio from the video. I take the audio track and slide it under the Pressey track (do this first!) and then delete the Agarwal video.

Then its a matter of finding the start point in the audio (drag the left margin). I removed one small bit by using Split Clip on the audio track twice, and deleting the part I did not want. Sometimes the audio matching takes a lot of work, but my first guesses were really lucky.

Right as Pressey is doing his candy reward thing, Agarwal is talking about “instant feedback”. He says, as Pressey manipulates the machine “How else to you grade 150,000 students?”

Here in the closing sequence, I use a simple “Centered” title from iMovie. I wonder if folks know you can modify the fonts, colors, sizes, even add extra lines? Don’t accept defaults!

I continued Argawal’s voice for his credits, where he talks about “students dreaming of the green check mark” and then when Pressey’s credit sequence comes in, I fold his voice in, which we have not heard. He ends with the value of students retrying an answer (one of four choices, sigh) and the amazing feature of flipping a lever to get immediately scored testing. I roll in with a credit screen for Audrey’s post…. and fade to black.

“an ability to actually teach”.

Let’s hear it for actual teaching by a machine.

This may be my finest remix hour… until the next one.