Not related to the cliché about oldest profession, maybe one of the longest running questions we upright hominids ponder is “Who am I?” This was what we tried to explore yesterday in a DML Commons Live session– Who Are We Online?.

A bit following on the topic, what we hope people might contribute to after, and in You Show fashion, some backstage looks at running the event.

My role at DML Commons has been working with their web team to add in the blog aggregation, signup, etc, a la Connected Courses. That’s just the mechanics, I am also trying to help in the tech and process support with a Blog Talk area of the forums (as usual, the forums are rather silent) and trying some call in show type things for people seeking assistance.

I forget now the exact trigger, but the folks running the show asked me and Maha Bali to do something to help the target audience (young PhD scholars) to support them as they build out their online professional presence as academics. DMLC Commons has a lot of things going on as Google Hangouts, and we went back and forth as I tried (and failed) to come up with some other format than a hangout, but we did anyhow.

Remixed from Peral Jam logo Public Domain image on Wikimedia Commons. You figure out the legailty of it, it’s soup to me.

I do enjoy the format of a conversation / talk show for live web synchronous events, so much more than the slide show talk overs. This was something I was doing a lot in my last year at NMC (archives likely now gone). It’s (a) more interesting to have a live conversation (a slideshow can be “flipped” (oi!) to watch at another time); (b) it’s ore lively; and (c) as a guest you do not have to fuss around preparing slide decks. Just show up!

I wrote about 6 more paragraphs and realized most people probably just want to Watch The Darn Video, so here is the archive. Read on below for more stuff about the hangout.

And Google Hangouts suit this well, especially with the automatic camera switching to the person speaking (or tapping loudly on their keyboard). The format and guest list came together in about two days. I asked first colleagues with experience in this area, and they all made room in their busy schedule (specially nods to Bonnie Stewart who defends her dissertation on this topic THIS WEEK), so we had on board:

I asked our facilitators Matt Rafalow and Amanda Wortman to recruit young scholars participating in the strands of DML Commons. It seems naive to call them “new” to social media, because, as we saw, they come already with a breadth of experience in building their online presence. We appreciate the participation as well from:

I did throw in a gimmick.

For the prep, I asked each participant to pick the online identity / space (twitter handle, blog URL, facebook username) that was most important to their academic work, and write that on a piece of paper. I then asked them to introduce themselves by holding it up to the camera. 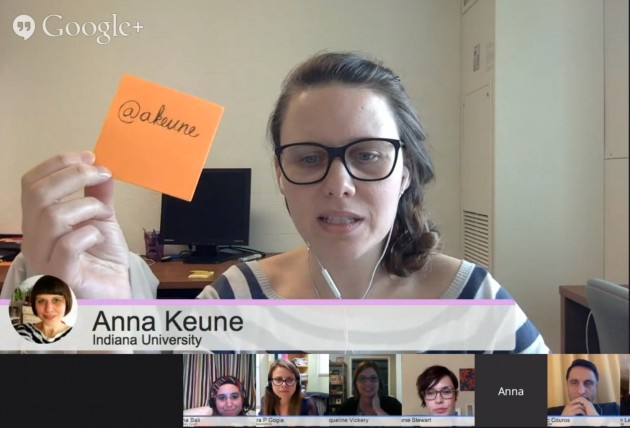 Then, while they talked, I did a screen share as I pulled up their twitter profile, blog, and ran a google search on their name (I did ask ahead of time of it was okay to do the latter).

As we saw, especially on the image searches. there are more than one Bonnie Stewarts, most of Maha Bali’s are some sultan from Bali, Laura really was an M.D., and most impressively, nearly all of the images of Alec are actually Alec Couros (worth mentioning are his experiences of being catfished).

I had prepared about 18 possible questions, many I just wrote, but others contributed in twitter ahead of time from Amy Burvall, Bill Smith, Lisa Smith, and Ken Bauer. Many more came in during the talk. 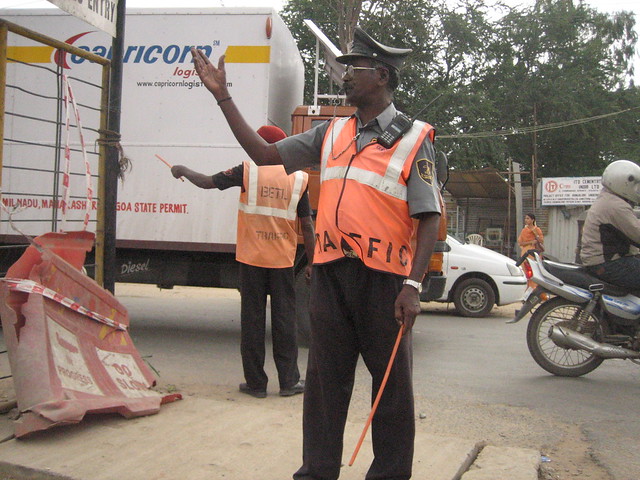 I picked up a really useful tactic from Howard Rheingold in a recent session like this; it’s being a traffic director backstage during the hangout. We use the chat that the participants see, where I try to give them a heads up on the next question, and ask who wants to address it. Jacqueline might type “I’d like to answer that” and Laura writes “I can add a different perspective on that”, so I can call on them in term.

It need not be rigid control, but it helps to avoid people talking over each other, and to avoid dead air when no one wants to respond to a question. It makes for a rather frantic and window shuffling experience el Traffic Director, but I liked the way it worked. This was my setup for the show 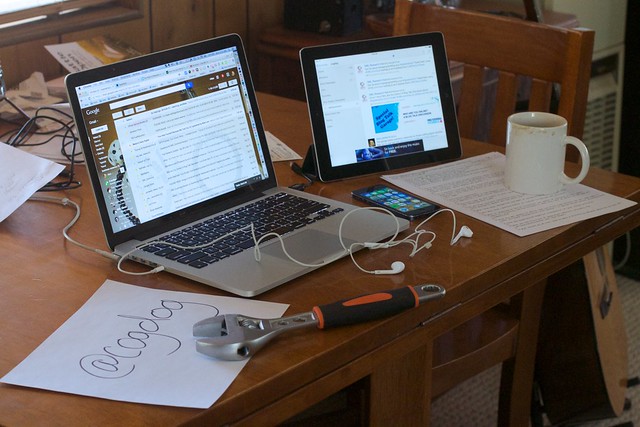 The iPad on the right was to watch the twitter stream. The wrench was to hold up menacingly (joking) if someone talked to long.

It was a lively discussion, and it feels like in an hour, we answered maybe 2/75 questions. I collected most of the bits I could find in a storify:

As a followup, Maha organized all of the questions in the original list and added the ones asked on twitter, into an open Google Doc and we hope people, DML Commons participants, or anyone interested, jump in and add, re-arrange, remix, etc.

Thanks to Bonnie, Anna, Laura, Maha, Jacqueline, Alec for answering the call enthusiastically on short notice, and a big shout out to Jamieson Pond at DML who coordinates these hangouts like a pro.