That dog named “Loki” is not rolling over, she is flipping (?)

In my last post, I questioned perhaps that The Chronicle of Higher Education was not following the guidelines of reusing my flickr Creative Commons Share-ALike licensed photo. With some twitter nudges by Bryan Alexander, I did get an answer from the Chronicle via Ron Coddington, pointing to a Creative Commons FAQ on sharing such licened content on a password protected site:

Can I share CC-licensed material on password-protected sites?
Yes. This is not considered to be a prohibited measure, so long as the protection is merely limiting who may access the content, and does not restrict the authorized recipients from exercising the licensed rights. For example, you may post material under any CC license on a site restricted to members of a certain school, or to paying customers, but you may not place effective technological measures (including DRM) on the files that prevents them from sharing the material elsewhere.

The thing is… I ought to read my own blog. In September 2010, I announced that I was going full circle BACK to using CC-BY on my photos. I had tried on SA and even NC in a short time span.

I cannot even remember when/why I went back to SA since then. I am pretty sure it was upon reading the rational Wikimedia Commons uses for Share-Alike. I had rationalized (I think) that it took care of disallowing commercial use of my stuff, because any money making way of doing it is not going to put a share-alike license in their product.

I am not even sure I can fathom that logic any more. The ironic thing is, I wrote in 2010:

And this is the LAST time I will switch me flickr license.

I’m most likely in the next few days, flipping my flickr photos and my blog license back to CC-BY.

I am come back around that the least restrictive license is the better. And that I really do not care if anyone “uses my images to make money.” If anyone can get filthy rich from something made from my images, that’s a feat for them. I would never do anything to make money from my own photos, so there is no loss for me. I cannot lose what I did not make.

I did trace back in 2010 to Leigh Blackall’s Illegal Rhetoric of Share-Alike; he made a case that it was problematic in education, mostly in examples that made from content of mixed licenses. I think that the examples Leigh described are treatable in the manner of the Comprehensive Attribution Statement described by Mike Caulfield.

The thing I am left with more after all of this is that here I am, someone who has been practicing and spreading the word of Creative Commons for quite some time, as are the people on my Chronicle wagging blog post… and we are still not clear on the shade of meaning differences.

Look how simple it is. 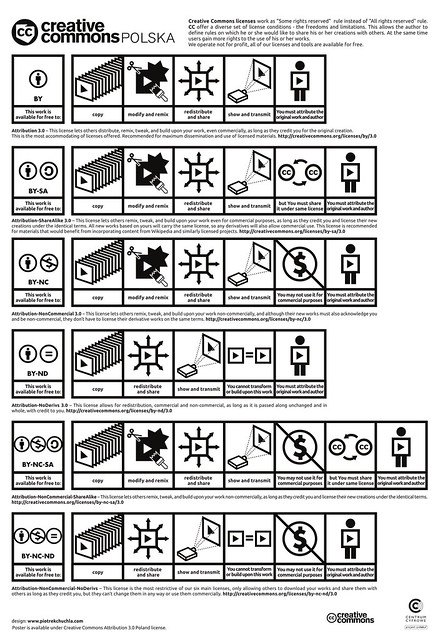 flickr photo shared by labnol under a Creative Commons ( BY ) license

How do we expect people new to coming to an understanding to make sense of all the flavors of licenses? We want school kids to make these choices? (. And there are people out there who want even more kinds of licenses. CC-BY-MC-GD-ER-TZ-XD?

I am not trying to tell anyone else what to do here.

But I am going back to the simplest, and frankly, I’d rather focus my energy on the sharing rather than the licensing of the sharing.

And heck, I will probably change my mind several more times.