That dog in the photo? I don’t know her, but according to the flickr author, Rosie has a respectable life philosophy:

Speaking of fun and trying to be best, maybe the thing I made that I am most proud of is my flickr improv tool pechaflickr– a mashup of pechakucha, powerpoint karaoke, and random photos from flickr. 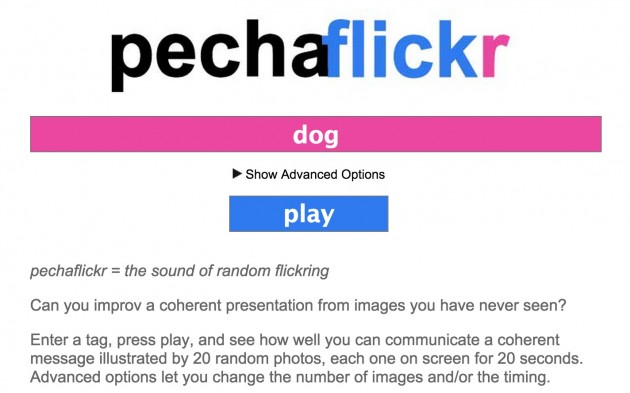 I try to work a round in all of my Storytelling presentations, I wove it into a few workshops, and once used it as my “slides” for a talk. When I was planning my sessions for a 2013 visit to Yokohama International School, I mentioned use pechaflickr– Kim Cofino told me a recent keynote speaker there had used it for a talk on improv.

That’s just me me me me.

But what I love the most is when other people share their own experiences with the toy. I got a fabulous response recently from Trisa, a prep school teacher from Connecticut. She described her own approaches and agreed to let me share them because them seem rather reusable (just do not say you “stole” them ok?):

I came across this site at a language/technology conference in 2013 and I’ve used it ever since!

I have used this in my Spanish and ESL classrooms to help with their speaking practice. By doing this, I allow my students to choose any topic they desire (usually curbing it to be appropriate for high schoolers if they go too far off the wagon in what the internet might dredge up) and it allows them to work on timed, spontaneous speech production with little preparation (to eliminate the nasty habit of “write in your native language, translate to target language, memorize” pattern). The ways in which I have changed it to the different levels are sampled below:

Beginner: Identify objects in the pictures using basic structures “This is a white dog. I like dogs. Dogs are nice. This is a picture of two dogs…” May not be in full sentences. Vocabulary based.

Intermediate: Beginning to show more tense constructions, usually a present continuous/progressive review answering the “”What is happening in these pictures?”” Full sentences.

Advanced: Addresses the class by introducing the topic and begins to use the pictures to support their stance on the topic (rather than straight description) structure their presentations using transition words and connectives (can be geared toward a certain grammar structure, ie clauses)

Geared towards business English/professionals: a directed elevator pitch of a product or concept (to a designated audience to up the ante) that does not directly describe the pictures and items but rather uses them as support to enhance their spontaneous presentation

The first rounds are always nerve wrecking and usually involve a lot of ums, ah, oh mans, and laughter, but after that the students seem to enjoy it and want to see who can make the best presentation.

Sometimes I have the students do a group improv presentation with this to work on building comments off the backs of the support given before them (true listening ability) as well as working together to see who can speak up when appropriate and help move the presentation forward.

Perhaps in my own current language learning, I ought to use my own toy for learning Spanish.

I’ve had some long term dreams of making it a SPLOT like thing one could install as a WordPress theme, enabling rounds to be “saved” so the same photos could be spun for someone else and to allow people to comment.

The other thing relevant about pechaflickr is that in the same way the concept is a mashup of ideas, the code itself, first spun out in 2011, is a stitching together of code I found for accessing the flickr API via php and the jQuery Cycle plugin. Working on this was fun, and doing so helped me notch up a few steps on my jQuery chops.

Be more like Rosie…. play with toys. Or, as happened tonight, dogs do connect:

My good friend and colleague @RadHertz DM-ed what might be my new business tagline "Got a problem? Get a Dog!"

flickr photo by Wonderlane http://flickr.com/photos/wonderlane/11866873836 shared under a Creative Commons (BY) license