I’ve used this suggestion a few times to participants in our UdGAgora Project who are trying to figure out what kinds of things they can have their students do, that also produce some artifact that documents their learning.

Few things work better to me than having your students have to explain the concept themselves to someone not familiar with it. Just the act of having your students teach is about as old as dirt. In 1980, my 10th grade math teacher had a group of us teach the rest of the class about Non-Euclidean Geometry. Having to learn it to teach it resulted in a level of understanding (and memory) that was way beyond trying to learn it from what the teacher did.

It reminds me too of a student created ds106 assignment Make a Tutorial for your Mom.

And then it reminds me of my Mom’s visit in 2009, when out of the blue she said, “Explain this twitter thing to me.” My immediate reaction was to tweet it as a question for others to help me out with

My 80 yr old Mom says this morning, "I want you to explain this 'twitter' thing, we'll do it over lunch" – any help out there?

and I recorded the audio of our conversation, and write up as Twitter in Mom English.

I was not planning to, but I just listened to the whole conversation again.

Ok, so she does not understand the business model (nor do I we did not talk about it), she need not be aware of the API, or anything. But she really, in her own way, made connections to the world she understands. This may have been Episode 96 In Which Alan Underestimates His Own Mother.

I adore that conversation, that was not only between us, but people tweeting back like @shareski @knucklehead @pumpkiny @jimgroom @lisayoung @cceraso etc etc etc etc. 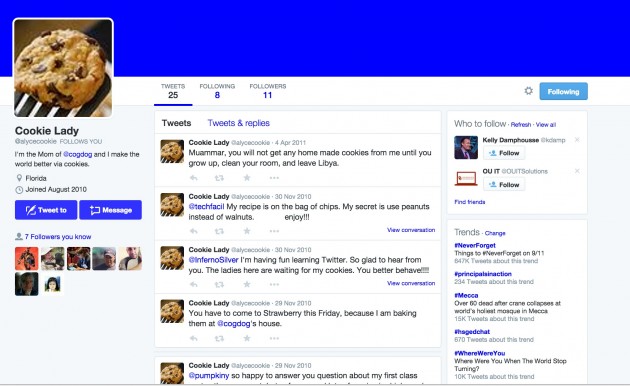 Yes, I set it up, and among the 25 tweets, I think I actually write 22 of them, like StuffMyMomSays. The last, from 2011, was after we had fun doing a live #ds106radio broadcast from her home in Florida, I asked her something about what she would do about the then worrying situation in Libya. I tried to convince her to do a social media campaign to send Gaddafi some bags of cookies

Muammar, you will not get any home made cookies from me until you grow up, clean your room, and leave Libya.

That was the last time I saw her alive… There is something kind of neat that her 25 tweets are still out there in the distal corners of the internet. It’s neat because I know it’s there.

But beyond my own nostalgia and Mom memories, if I was asking my students to “make a video about what they learned” I don;t want to have a talking head class report like a narrated PowerPoint. I might ask them to make a video (or audio) of them explaining the topic or concept to a parent, a child, a spouse, a sibling. This puts the student in a whole different plane of learning, when they have to explain. And they end up using a much more natural voice then when they think they are talking to their teacher.

Top / Featured Image Credits: THATS MY OWN PHOTO OF MY MOM WHY WOULD I ATTRIBUTE IT? Because I can and should — flickr photo by cogdogblog http://flickr.com/photos/cogdog/4131708783 shared under a Creative Commons (BY) license