A few hours early, but here is your birthday present, @drjones106 — one of your greatest hits. I knew there was a pretty good remix potential in Dylan’s Ballad of a Thin Man (from Highway 61 Revisited). The tabs were a bit all over, I munged together a few, this was closest to what I […]

This is just a test for Rochelle Lockridge, who is getting her chops as a new DS106 radio DJ. It’s been a really really long time since I used Nicecast, so I just took a few minutes to refresh myself for the set up I used previously for being able to DJ music and cross […]

cc licensed ( BY SA ) flickr photo shared by Alan Levine We were excited that SourceFabric asked to stream 2 hours of ds106 radio for their program for World Radio Day. I got a smattering of suggestions interest in the google doc, but a big gold star sticker goes to Dr Jones for sending […]

February 13, 2014 is World Radio Day a UNESCO Project aimed at making the world aware of the power of radio as a platform for change. Via our friends at SourceFabric (makers of the open source Airtime software), ds106 radio is going to be part of the SourceFabric Radio day long program. What is special […]

cc licensed ( BY SA ) flickr photo shared by Alan Levine Can You Dig It? (the original call sign) January 23 marks the day in 2011 when a blog post from Grant Potter announced ds106 Radio. I hope people who have been part of the community before, or just have been a listener, or […]

cc licensed ( BY SA ) flickr photo shared by Alan Levine The ds106 radio has been silent for 2 days. The station doors were locked shut, lights off, and only faint sounds of scurrying and muffled electrical tools were heard. But as reported by Grant Potter, the ice weasels were successful in rebuilding a […]

What feels like a month later, I’m still back blogging some of my experience at Mozfest in London. My ears perked up when someone mentioned something about SourceFabric being at Mozfest. @grantpotter I was told the folks from Airtime are sponsoring the #Mozfest beer tonight, hope to find em to talk about #ds106radio — Alan […] 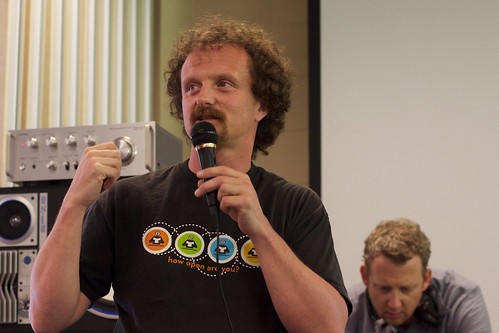 During a presentation at the 2011 ETUG Spring Workshop, Grant Potter, who initially set up the ds106 radio station said

I wanted to create a web-base radio station; I did not want to manage one

This gets to the heart of “distributed, freeform, collective webradio” – from the get go Grant gave away the keys to the station, the username/password for managing it. The way the first system worked, a playlist of uploaded content was always in rotation AKA “Auto DJ”. When someone broke in with a live broadcast, it superceded the playlist, so essentially there was always something on the radio.

Things were not always smooth on the server side, and in the early part of this year, Grant rebuilt the system using Airtime, an open source internet radio station managing software. Some things that are different as that there is no set autoDJ list, the system is designed to let multiple people manage the scheduled content via a calendar, creating blocks of times for shows, and managing content in playlists.

It is a different mindset, something many of us never quite wrapped our heads around, and, from what I can see, not too many people have figured out how to program the stuff that plays on schedule. With that, we have… well a lot of dead air.

Dead Air is Not Our Friend.

I’ve been trying to better understand the system. For some, the new software might be seen as a step back (the meta data from live streams is not picked up form Nicecast, and the Twitterbot is sick, its not quite as easy to know when there is a live broadcast.

But I put a higher trust into what Grant sees for the next wave. And the thing is, we need some more people willing to go in on a semi regular basis and help fill out the scheduled content. A real radio station never plays the same things every Monday at 4pm, so what is needed is to pre-fill the calendar ahead of time.

I hope I can explain all of this, but bear in mind, I am only learning by trying. To understand it, get a hold of the Airtime Manuals. Or try to follow my path.

The leap of understanding is that there is first content (audio files) that can be uploaded to the media Library. You can also create entries for web stream, URLs for live streams from radio stations (this allows us to easily crosscast).

The uploaded media can be organized into playlists, either static like you do in iTunes, or as you can also do in iTunes, “smart” lists (or blocks), meaning you can have the system play stuff of a particular genre, or search for keywords in the title, artist, or even stuff that was uploaded before or after a certain date. Smart Blocks are the keys to understanding.

Shows are scheduled on the calendar; these are merely blocks of time marked to be in the mix. For each block, you have to load content into the show, which can be any mix of single uploaded audio items, a web stream, a playlist or smart block. But what is tricky is that I can create a show that repeats every Monday at 8:00am, but the only things that repeats is the schedule, each week content must be added to the block.

This is part 1 of hopefully two posts about ds106 radio, the open microphone internet radio station spawned for ds106 (in case you do not know {how could you not} its the Open Digital Storytelling course) in January 2011. The next post will be some info on how to program the radio shows. But I […]