Our collective cycle of social ignorance/stupidity/racism/ goes sadly through another Lather Rinse (Do Not Learn from Mistakes) cycle. I’m not going to summarize the story of Ahmed, it’s easy to find.

Yet I see again how even lower than I thought is the least difficulty setting is that I play life on (if you have not read John Scalzi’s treatise, stop wasting time on my blog, and read his post. Thank you).

I have traveled around the US and even internationally with an electronic device quite likely as suspicious as Ahmed’s clock. It’s a digital media experiment device I call The Storybox 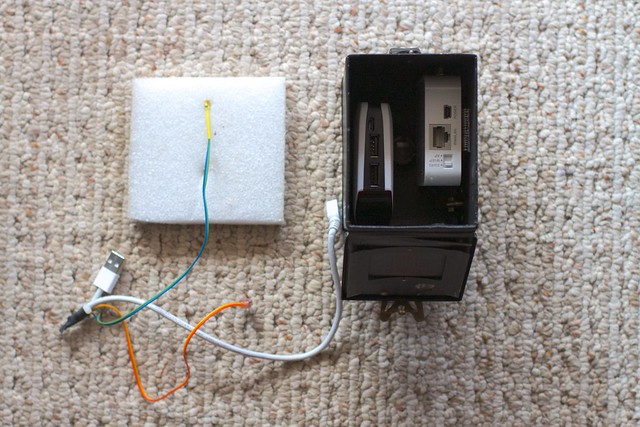 It’s a wireless router, a power supply, with some home-made wiring done by my friend Ken to include a switch and a light, and I have it all stuffed in an old Brownie Camera body.

My first version of this device fit inside a metal lunchbox: 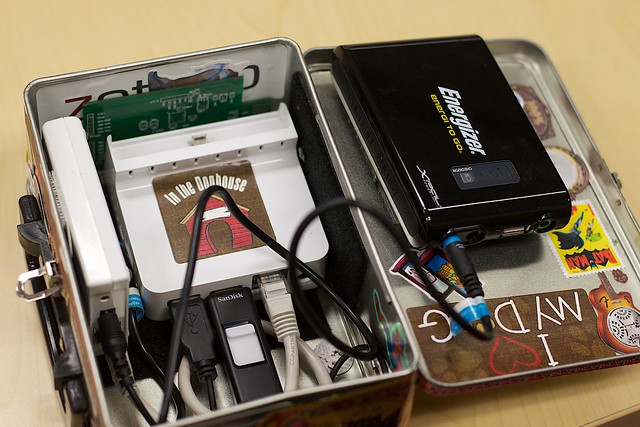 Just looking at that I cannot comprehend how it was not seen as suspicious by at least 20 different TSA stations I carried it through. I think it looks suspicious.

I have traveled with this in my carry on backpack all around the USA, Canada, Australia, New Zealand. It is based on a concept known as the PirateBox.

The one time I was asked about it was by a TSA agent at the Buffalo airport. I started to explain its components and started to say that it was “based on this device known as a PirateBox”. Before the last word was even fully out of my mouth, 4 more agents rushed over. The advice I got, from the agent, who did not put me in handcuffs, did not put me in a locked room, he only smiled and suggested I refrain from using the “P” word in a TSA area.

How low a difficulty setting can I get? This game is easy as me.

I cannot get Ahmed’s expression out of my mind, this skinny kid in glasses and his NASA t-shirt IN HANDCUFFS. 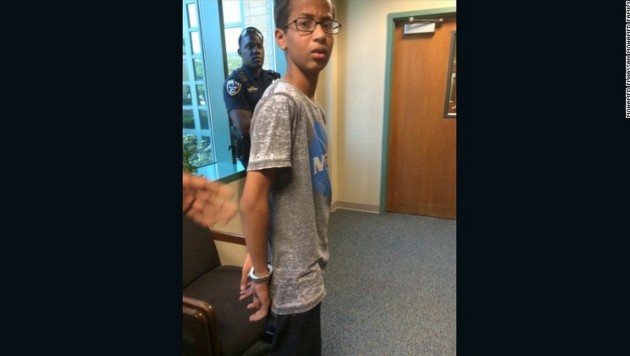 I bet Ahmed’s resilient, and this will not deter his curiosity. But he’s been forever changed by being treated as a criminal by ignorant adults, the people he is supposed to look up to for wisdom and understanding. He will bear this as a soul shroud, and may look around now with doubt at the ???? who are supposed to encourage his curiosity, not stomp on it with metal boots.

With darker skin and a Middle Eastern name, Ahmed’s life difficulty setting is much higher than mine. Fairness set to well below zero.

I know that no one will arrest, suspect, hassle me for carrying a suspicious looking boxes of wires.

And I cannot seem to do more than tweet an image, write this blog post, and try to wonder about a world of understanding I knew as a kid that recedes father and farther down a vanishing hole of brutal reality.

Top / Featured Image Credit: My own portrait taken with an iPad showing my own non-bomb but suspicious looking electrical maker project.