That toy hammer in the photo above belonged to my Dad. It’s handle is worn wood, and the tiny hammer is corroded metal (metal toys are long passé). I question my own memory; I seem to have this story that he gave it to me when I was young. That’s possible.

But a competing memory story was that it sat in this large metal green toolbox he had in the basement. It was full of wrenches and stuff, with maybe three drawers of neatly organized sockets. I just enjoyed opening the toolbox (all metal) and looking in it; the memory is the tiny hammer was sitting in the top compartment.

The toolbox itself was something Dad got in his brief stint at running a garage/gas station in the early 1950s. I recall he had a hired mechanic, someone probably named Jack or Mike or Mack (seems a good mechanic needs a solid single syllable name). But I can see my Dad, as owner/manager of the operation, having his own tools.

I might just be making this up. I have few people left to fact check me.

But whatever the origin, this little thing, that I can guess might have belonged to Dad when he was a kid (or so I prefer the story), ended up with me, and its gone everywhere I have. From the east coast to Arizona. And now sitting on a shelf.

I would not have thought about this had it not been for a nice tweet this morning from Tim Klapdor (one of many Internet Friends I Have Not Yet Met).

So many things come together in this piece – UI, UX, open, usability, design, programming and a @cogdog photo. https://t.co/f1JaNk8gJe

And sure enough, that photo of mine is the lead on a story on medium by Christian Heilmann, Don’t Use Slack? 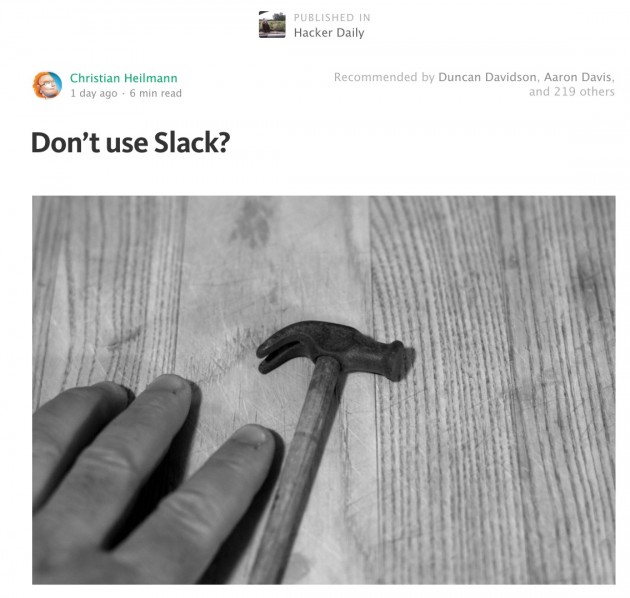 It’s got like 225 recommends, easy more than the sum total of all my medium articles put together (true, I checked my numbers. One story got 88, another 30, and the rest like 1 each).

It’s not the first time some object of my Dad’s has triggered an Amazing True Story. His old drafting table traveled with me too, and through a wild series of accidents, ended up on the cover of a Biology research journal

When my Mom filled in some more of the story, the circle came around as I realized that in the 1950s (after the gas station business flopped), Dad’s way ahead was through distance learning. Heck, so was his dad.

On the medium article got a credit link for my photo, which is nice. I probably would have never known of it (because attribution links, the times they happen, are one way) were it not for Tim signaling me. That’s rather neat. Machines don’t do that, people do.

I wondered what terms Christian searched on to find my photo. I found almost 160,000 creative commons licensed flickr photos using “tool” as a search term (I did not see my photo). Even narrowing the search to “little tool” (cc licensed) brought 4700 results, and I did not see my photo in about as many scrolls as I was patient to do (maybe 10).

So I marvel at the odds of anyone finding my photos and the even smaller odds that I would know my photo is used. And I marvel at how nice it makes my feel. Then I think about that I use in my work creative commons licensed images several times a day, so maybe 2000+ times per year?

I can’t say I ever write someone to thank them or let them know I used their media. Maybe 5 times a year or less.

And so yes. The legal language of a creative commons license says that I do not have ask someone’s permission. But I am wondering at my own actions, and wondering how little it would take to let someone know. Not because I have to by law, but because it’s a nice thing to do.

And it might make someone else marvel as I did today.

Should we go about our work and days doing just what we have to do, or can we step out sometimes, and maybe, maybe, go beyond into doing something we ought to do.

Spread some marvel. It cannot help but have an impact.