One day after arriving in Puerto Rico, they had me planning a workshop / talk for today. That Antonio Vantaggiato, he is one boss hombre, especially now I have deputized him as a Tombstone Marshall 😉 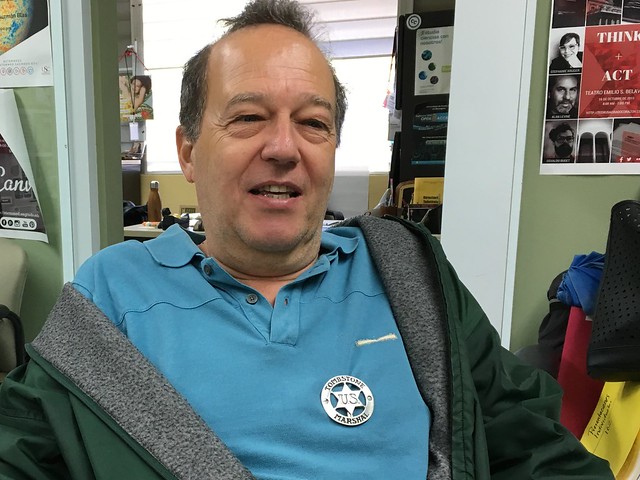 Actually he is one of the kindest and most thoughtful people in our edtech field. It was he who brought me here in October to do the “Unspeakable” TEDx thing. As we discussed that visit, he offered me return visit for a longer working visit with the STEMmED project at the Universidad Sagrado del Corazón in San Juan, PR.

That started Monday, after a red-eye flight from Phoenix. I’m here to help share ideas with his colleagues, co-teach his INF115 course (we got them started with a new Daily photo site last week, Una Foto Cada Dîa, help with WordPress stuff, maybe spin off a SPLOT, and whatever else we dream up.

Yesterday he asked if I could do a general open session for students, and two of them (Shayla and ??? yikes I forget names easily) sat with me yesterday to brainstorm some topics. Somehow we landed on “cool stuff” after I talked about the idea of using popular web media like memes and GIFs in an educational context.

Around 2pm the brilliant Bernabe Beltran asked for a title as he was designing a flyer for the talk, and the title fell out “GIF, Memes, and Cool Web Stuff”. In like an hour, he made the talk look rather elegant (well below my photo): The only thing left was to develop something to say.

Last night I put together some ideas into one of my WordPress as Presentation sites (HEY INTERNET, POWERPOINT IS FROM THE PREVIOUS CENTURY, when talking about the open web, do it on the open web — http://show.cogdog.casa/cool/.

Thinking about Cool, I started with how not cool I was in school. Yep, that is my 5th grade class photo, circa 1973, and you can easily see how uncool I was: Can you find me in this class photo?

However what is cool is seeing the photo I posted on flickr from the town sign in Cool, California 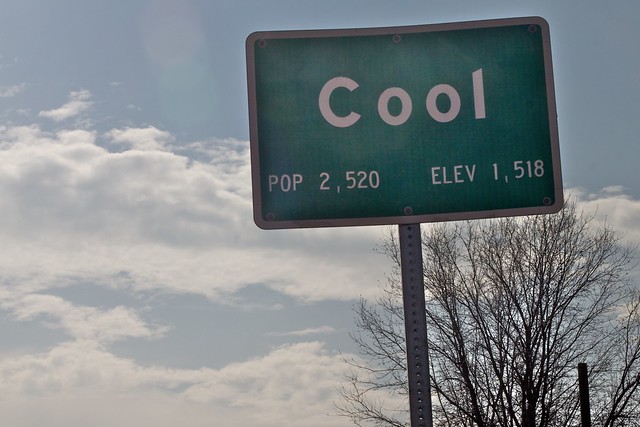 …get more views than the town population and that one of those decided to add the photo to Wikimedia Commons… someone I do not even know (thanks PDTillman!).

Next, because I like to start a talk with the audience doing something (and it has a later tie-in), I had the group (maybe 15 students, Antonio, and fellow faculty and cool person, Doribel) do a round of pechaflickr. 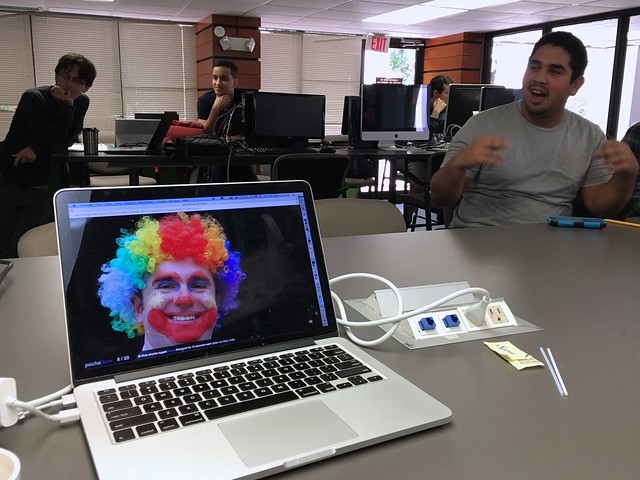 You can try the same pechaflickr settings as we did, though your clown photos will be different (there are lots of bizarre clown photos out there, who would have guessed?). This group was very participatory. I had not done a complete count in the room (usually I choose enough for everyone to have a turn, so the last 5 I left it open for anyone to jump in– no slide was left unspoken for.

I like to talk afterwards about who was nervous, how the usual mode is to literally describe the pictures, but people like John go beyond and add something to the story not shown in the photos (for some reason he got a photo of a lake, and he talked about drowning clowns in the lake, okay morbid, but….).

Next we went on to discuss meme images, which is nice, because I do not have to explain them, just show. Of course there are memes about memes: Interestingly while all of the students have seen them, only one or two admitted having made one. So I had them help me do one with imgflip: 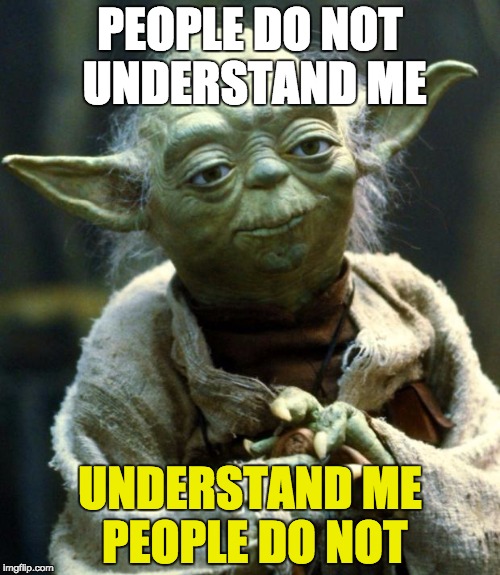 We talked about the “why” they are populat, of course funny, but one of them said what I hope they would– that it evokes/expresses a vivid emotion. I postulated about possible uses of the basic capabilities of combining images and texts into messages for education that maybe were not “teaching” but could generate curiosity. The “funny” is the aim most people aim for, but what about just representing an important person in your field, with a message? Or using the same image to represent opposing or different perspectives n an issue? Or….

Next was on to The Mighty Animated GIF. I used as some possible use cases from the collection of Short Form Videos I assembled for the UDG Agora project — to observe natural or man made processes, to show a path through a complex system in a shortened amount of time, to identify a passion of ours– I love this Vine of Jabiz Raizdana showing his love of books in a 6 second loop

I introduced the easy GIF maker tools like Giphy and imgur, but pointed out some of the shortfalls of quick and easy (large files with un-necessary repeated frames, limits on complex animation…)

a firehose of random “cool tools” from either my own browser or stuff I have been collecting in pinboard.

The fun thing was last night I was looking in Goggle Images (filtered for image slicensed for re-user) for something to represent “Cool Stuff”, and who should I see in my results but Roland Tangloa? 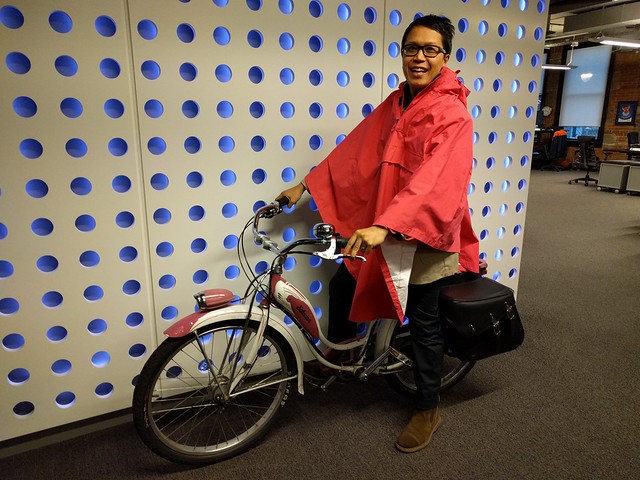 What could be cooler than that?

I can tell you- after I just summarized some of my stuff, the students started sharing ones of their own… I added them to the site, but these are the ones I learned of today (most are new). 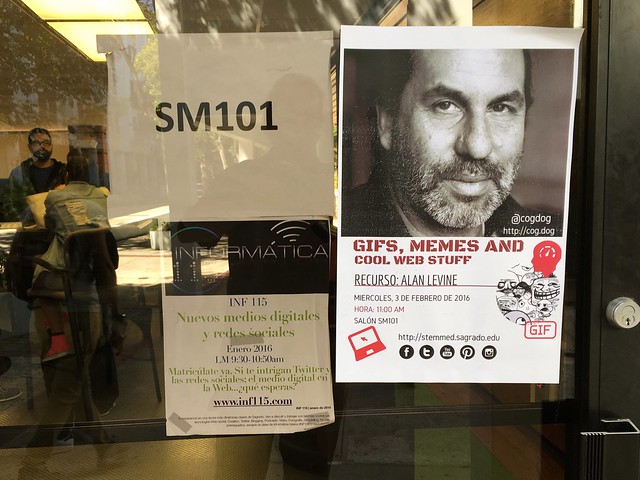 Yep, this was a coolest way to start the month stay in San Juan… well at least until I get to the beach.

Top / Featured Image: Screen capture of the presentation site for today’s talk, available at http://show.cogdog.casa/cool — the background image of the “cool” sign is my own flickr photo http://flickr.com/photos/cogdog/6706527857 shared under a Creative Commons (BY) license