I was not going to do today’s DS106 Daily Create task to add a modern context caption to a Frederic Remington painting: 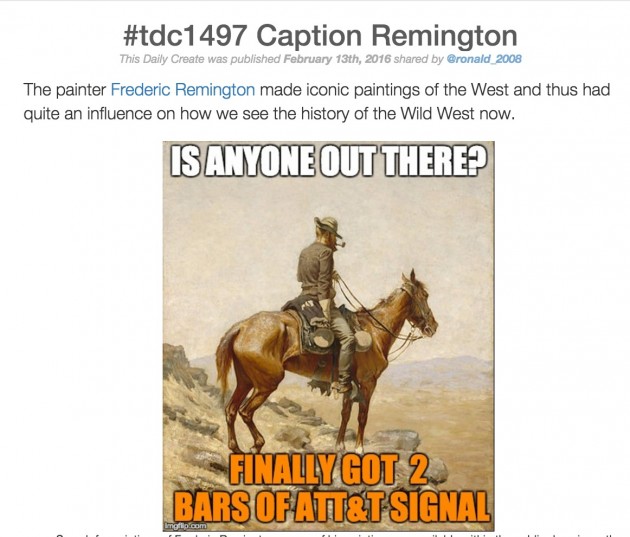 I had already done the one that appears there.

But I am just sipping coffee, and in much less time than this blog post will take, I made a simple meme image (I do mine in Photoshop, using Impact Font with the Stroke Layer effect).

That’s the ds106 thing, there is this “assignment” and what happens along the way that goes beyond or around it.

So I knew there was a lot of Remington art works in Wikimedia COmmons, so when I googled “Frederic Remington” in Google Image search with the usage set to Licensed to Reuse (please tell me you know how to do that?), I had a lot of choices, but this stare down of an Indian warrior and his horse jumped out at me.

I found a nice surprised when I clicked to view the site (I nearly always go to the site first to see what context an image is used, and so I can get my attribution source) (please tell em you attribute images you use?) (why am I so parenthetical today?).

I did not land in Wikimedia Commons, but on a page for this painting in a site I had not seen before, Wikiart: 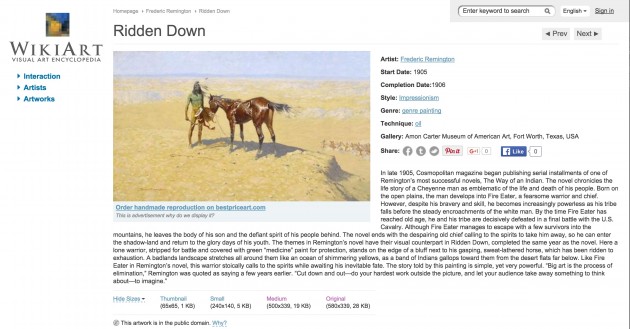 I not only get the image, some informational metadata, but the story behind the story:

In late 1905, Cosmopolitan magazine began publishing serial installments of one of Remington’s most successful novels, The Way of an Indian. The novel chronicles the life story of a Cheyenne man as emblematic of the life and death of his people. Born on the open plains, the man develops into Fire Eater, a fearsome warrior and chief. However, despite his bravery and skill, he becomes increasingly powerless as his tribe falls before the steady encroachments of the white man. By the time Fire Eater has reached old age, he and his tribe are decisively defeated in a final battle with the U.S. Cavalry. Although Fire Eater manages to escape with a few survivors into the mountains, he leaves the body of his son and the defiant spirit of his people behind. The novel ends with the despairing old chief calling to the spirits to take him away, so he can enter the shadow-land and return to the glory days of his youth. The themes in Remington’s novel have their visual counterpart in Ridden Down, completed the same year as the novel. Here a lone warrior, stripped for battle and covered with green “medicine” paint for protection, stands on the edge of a bluff next to his gasping, sweat-lathered horse, which has been ridden to exhaustion. A badlands landscape stretches all around them like an ocean of shimmering yellows, as a band of Indians gallops toward them from the desert flats far below. Like Fire Eater in Remington’s novel, this warrior stoically calls to the spirits while awaiting his inevitable fate. The story told by this painting is simple, yet very powerful. “Big art is the process of elimination,” Remington was quoted as saying a few years earlier. “Cut down and out—do your hardest work outside the picture, and let your audience take away something to think about—to imagine.”

Is the internet like this great open land, full of battles, where we sometimes end up facing our sweat-lathered steed ridden to exhaustion? Do we end up wanting to be taken away to a shadow and and returned to our youthful internet glory days?

But it was that last quote of Remington that totally resonated with me:

“Cut down and out—do your hardest work outside the picture, and let your audience take away something to think about—to imagine.”

It’s easy to try and put so much into our work, to be explicit, but to me, it gets most creative when the audience is left to something to imagine.

It’s hardly a great painting result, but when I thought of the sentence to put into my GIF, I had in mind a second line, a response, maybe about being busy, or not understanding how friending works.

But it seemed better, Remington-ish, to leave it open, and to not even try and indicate who was talking to who?

And I have this idea in my head more firmly about looking for ways to do the hard work outside the web screen, and leaving more for an audience (that might be you, if you are still reading) to do more.

All of this as a bit of creative muscle work, and finding a fantastic new resource in Wikiart. This is the does of serendipity that keeps me jazzed and not jaded.

The project aims to create high-quality, most complete and well-structured online repository of fine art. We hope to make classical art a little more accessible and comprehensible, and also want to provide a new form of interaction between contemporary artists and their audience. In the future we plan to cover the entire history of art — from cave artworks to the new talents of today.

The project is non-profit.

WikiArt filling system is based on the principle of wiki, i.e. free filling and editing the contents of the site by anyone who wants to participate in the project. The quality and reliability of the information will be ensured by consistent moderation of all the updates.

Wiki functionality of the site is still under development and we are working hard to open editorial section for public. Please request an invitation and we’ll let you know when it’s ready.

The site presents both public domain artworks and works that are protected by copyright. The last ones are posted on the site in accordance with fair use principle, because:

If you are the copyright holder of the work of art used for WikiArt.org and do not agree that its use on the site is in accordance with the fair use principle, please contact us by e-mail.

That last bit of rationale seems so sound and rationale, rather than mumbo jumbo terms of use, legal threats, power/control, and strict licenses.

Now what was I supposed to be doing now?

Top / featured image: This is something I created in about 10 minutes for today’s ds106 Daily Create which asked us to add a caption to a Frederic Remington painting. The image is his 1906 painting Ridden Down which I found via Google Images search (filtered for licensed to reuse) at Wikiart.