Several people have shared these stories about what Facebook is (here comes the scare quotes) “doing” about fake accounts.– Facebook is testing a feature that alerts you if someone is impersonating your account (from mashaable.com) and Facebook is reportedly testing a tool for detecting profile imposters (The Verge)… and everyone else is re-reporting it– Facebook’s testing a feature that alerts you if someone’s impersonating you (Naked Security).

Facebook is working on a new tool to help stem one source of harassment on its platform.

The social network is testing a new feature that will automatically alert you if it detects another user is impersonating your account by using your name and profile photo.

Note that Facebook does not explain how “it detects that another user may be impersonating you”.

Though the notification process is automated, profiles that are flagged as impersonations are manually reviewed by Facebook’s team. The feature, which the company began testing in November, is now live in about 75% of the world and Facebook plans to expand its availability in the near future, says Facebook’s Head of Global Safety Antigone Davis.

If the process is automated, that leads one to guess they are using their own facial recognition software. Gee if only I thought of that and like blogged it 9 times.

But wait a minute.

This is the first mention I have seen of a person inside of Facebook working on this. She seems to be on Facebook. Or is she?. She is on LinkedIn.

This is interesting too, because the frame it more in the lens of harassment or “reputation smearing” — the article suggests Facebook is aiming at women who are victimized by perpetrators making fake accounts of women… Note that “Facebook” never mentions catfishing scams, the ones I am roped into, where people create fake accounts using my photos to lure women into false romances, leading to asks for money. To them it’s as if it does not exist.

While impersonation isn’t necessarily a widespread problem on Facebook, it is a source of harassment on the platform, despite the company’s longstanding policy against it. (Impersonation also falls under the social network’s names policy, which requires people to use an authentic name.)

Hmm, “impersonation isn’t necessarily a widespread problem on Facebook”? How does one quantify “not widespread” like in relation to likes of cat photos? It’s not like I have documented thoroughly in ridiculous detail numerous impersonations over the last 6 months. But I am a small catfish bait compared to Alec Couros, who has not only blogged about it, but been on TV.

Not widespread? Would you believe the FBI? from a 2014 FBI Internet Crime Report: 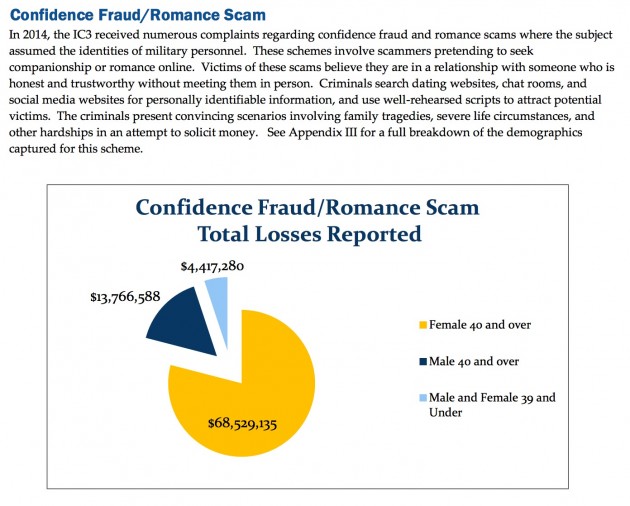 That pie chart adds up to $86 million lost by victims of these scams and these are just the ones where they were impersonating military personnel.

How the bleep is this not a widespread problem? It’s impossible to quantify the extent because of the shroud of shame over victims, most of whom likely never report their victimization.

Yes, one might say it’s not just Facebook involved, but Alec and I have made 2×4 over the head clear how prevalent this is.

Why am I not optimistic? Because if I get one of these magic notifications, and indicate an impersonation, what happens?

Oh yes, the same teams / process that ignored reports for over two weeks of a fake account using my photos all the time claiming that it was in line with their community guidelines? The same team that never uses a name? The same process that is shrouded in mystery?

How excited am I? Not even a good running dream…

Top / Featured Image: Reused from a previous post, this is modified from flickr photo by Mike Licht, NotionsCapital.com https://flickr.com/photos/notionscapital/2403514661 shared under a Creative Commons (BY) license