In my last long scroll post I went over the steps for forking and editing a silly GitHub page to mess with the lyrics of “Home on the Range.” That is like, so, not really useful.

This one might not be either. But it could be fun.

When you use a bookmarklet tool created with my Flickr CC Attribution Helper, there are a series of random messages that cycle through while the browser waits for the flickr API to return the data it needs.

Here is a crude approximation as a 4 frame animated GIF:

I wanted something to animate while this communication happened so you know that the thing is in process, so it was learning how to use the Javascript setInterval() and SetTimeout() functions. It can also generate a pop up if a longer than expected period passes (sometimes the flickr API chokes).

ANYHOW, I got the idea from… was it Slack’s loading messages that inspired me?

I just noticed, in @cogdog's Flickr CC Attribution tool, one of the processes says, "Waving at Ken." @ken_bauer

That’s true- I think once after Ken Bauer said something nice about the Flickr CC Attribution Helper I slipped a “Waving at Ken” into the array of messages.

I was ready to offer to add any message Brian wanted into the mix.. and then saw the light bulb go off

Why should I change the code when anyone else can via a GitHub pull request?

So I went in to motion to write this up… and paused. I saw some un-necessary redundancy in my code.

You see, each “flavor” of the tool (that means the kind of attribution it generates, a WordPress One with caption tags, even one in Markdown) exists as an HTML file that is passed the flickr ID of the photo of interest, and has in it the Javascript code to spawn the attribution window.

I had the same code repeated in each, so I did some consolidation to put common used JavaScript, including the array for the funnymessages array, into a single Javascript file.

That’s a long way to say here is the file you need to fork and edit if you want to add a new message. You just need to put a quoted string into the funnymessages array, putting it and a comma after the last element.

Here is how the function that does the work looks now:

I could fork/edit this to add a message for maybe Brian, see the last element in the funnymessages array:

And once I merge the request, that message may surprise Brian the next time he fetches a flickr attribution with his bookmarklet. I can change how it works without changing his tool at all.

And you can do this too.

All ya gotta do is fork.

I triple dog dare ya. Here’s the keys. 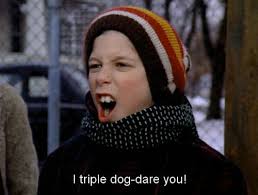 Top / Featured Image credit: I ran out of inspiration for a metaphor, so I am just using a screenshot of one of the random messages that flash when you use the Flickr CC Attribution Helper.