I’ve dialed back the level energy I spent in January and February writing about catfishing. It consumes me with negativeness, and frankly– nothing is really going to ever change at a systemic scale.

Do you really think Facebook is unaware of this problem? Given the number of reports that happen, the presence of catfishing support groups un Facebook- how can they possibly not know? And given that they know, what does it mean that they avoid responsibility? They are thus complicit. Check out this telling video where Alec Couros demonstrates a face matching tool available on a Russian dating site that is surely within the realm of Facebook’s technology:

And ask yourself- why is Facebook not providing its users a tools to face match potential “friends”? If Facebook eats the web, I sure hope the choke on some fish bones.

So do not expect Facebook to do anything except pile up advertising profit.

One catfishing victim I’ve heard from off and on for a few months, an artist, emailed recently and said that after moving trough her stages of WTF/shame/rage, she decided to work on a piece of art related to her feelings. That may be the most sound course of action I have heard from a victim.

Another victim contacted me today, and sent some photos of some Euro-dude’s dating profile site with all my photos, 4 out of six in the flickr set I keep stocked with photos known to be used by catfishers. She asked for resources. I was about to send her my Catfishing Info page, but thought about one of her comments. Once she found out she was considering just letting the scammer keep going at it:

Just for grins, I pointed out some problems with one of the photos of supposedly this oil drill operator at work: 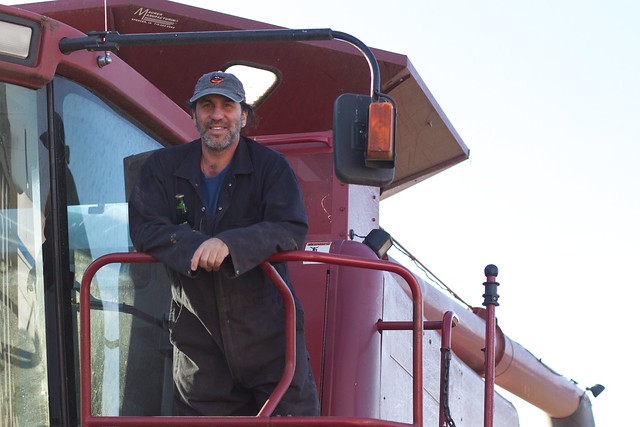 Just a little zooming in on the “oil drill platform” one sees the equipment is made by “Mauer Manufacturing” – an Iowa company that makes agricultural equipment, not oil drilling machinery. You can see reflected in the front window of the supposed oil rig, not ocean or rock, but a field of grain. And that big tub shooting in the back? I am not sure what it’s called, but the machine is actually a combine owned by a farmer friend I visited in Ontario. That’s where the grain gets shot into the big bin in back.

It takes very little to find problems in the photos, even before victims do a reverse image search and find that the face they knew as “James” or “Malle” belongs to some guy named Alan.

This whole thing reminded me of the TED Talk James Vietch did when he decided to do the atypical reaction to spam email- he replied to see how far the scammer would go:

And that was so much fun, right, that it got me thinking: like, what would happen if I just spent as much time as could replying to as many scam emails as I could? And that’s what I’ve been doing for three years on your behalf.

Crazy stuff happens when you start replying to scam emails. It’s really difficult, and I highly recommend we do it. I don’t think what I’m doing is mean. There are a lot of people who do mean things to scammers. All I’m doing is wasting their time. And I think any time they’re spending with me is time they’re not spending scamming vulnerable adults out of their savings, right?

It’s well worth a watch:

But his message again got me thinking– “All I’m doing is wasting their time. And I think any time they’re spending with me is time they’re not spending scamming vulnerable adults out of their savings, right?”

Catfishing victims have almost no recourse. Facebook does absolutely nothing; and I’ve shown more than once how flawed their so-called reporting system really is. There is almost no legal recourse because the scammers are overseas, virtually untraceable, and I’ve been told because victims willingly give up money, the burden of proof of a crime is proving psychological damage.

And frankly, I think I lot of people in general look down on victims as almost being responsible for being fooled.

But here is something victim can do. I am not sure how many would really want to do this, but imagine if A LOT of them did?

Victims can waste the scammers time. They can continue acting like the romance is alive. Like a catfosh on a line, rather than cutting the line, let that fish swim and swim and swim and tire itself out. “the more time [a scammer] is spending with me is time they’re spending scamming [others]”

And there would be, I expect, a bit of satisfaction in flipping the con, because now a victim is armed with the truth of the scammers deceit, but the scammer would not know it. Their con is a long game, they spend weeks or more courting victims. If you can make them spend more wasted time chasing an knowledgeable victim who won’t ever send them money- it’s that much time they are not entangling women who are not in the know.

So thus I added this bit to by Catfishing Info Page:

If You Really Want Revenge– Waste Their Time! Let Them Think They are Still Fooling You…
While I doubt many victims would want to do this, if you really want to get back at them– you might consider how you can waste their time and effort. What I mean is continue to, like the fish, play them out, continue to act like you are in love, and do whatever you can to make them expend effort to fool you.

Imagine if this happened on a massive scale.

Imagine an organized effort, as organized as the scammer’s operation.

Imagine all those catfish just swimming around, going nowhere, and becoming worn out, starved from exhaustion. 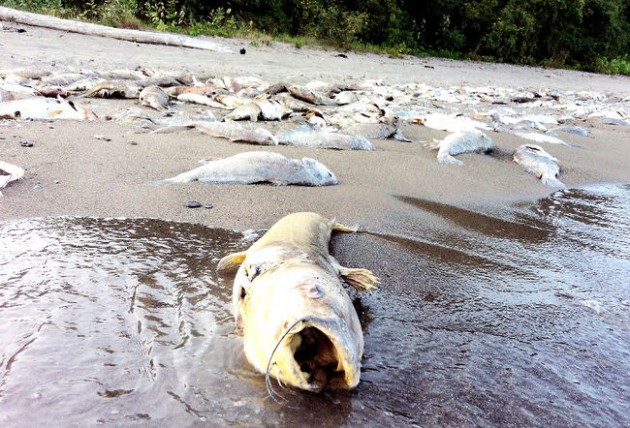 Top / Featured Image: I had hard time with the search engines. I was not even sure of the fishing term when you avoid reeling in a fish and let it swim and tire out. I finally figured it was “palying out the line” but when you combine “play” and “fish” you get a lot of cute graphics of video games or drawings representing the game “Go Fish”.

The image I found is from a Dutch fishing blog post— it carries no license or credit (as it seems 98% of the web), so while it’s not strictly re-usable, I am giving more credit than they are.