Who would have thought a cute photo of a dog and cat hanging out together, used for a DS106 Daily Create, would send me on a journey of non-discovery? This post is part pondering the state of lack of photo attribution, and some speculation that it’s less to do with following rules of giving credit, and pretty much how the problem, if it is one, will likely not get any better.

First of all, this photo was a wonderful creative prompt submitted to the Daily Create by Mariana Funes, with the prompt for TDC1590 “What are the looking at?”: 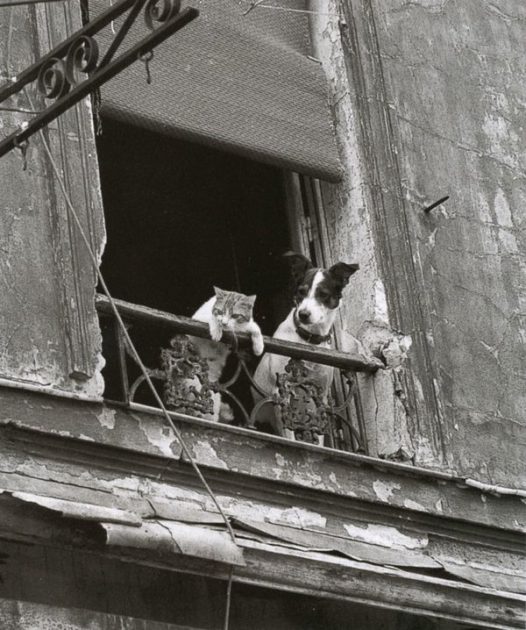 It’s classic open-ended ds106 creativity, shown in the 18 responses including GIFs, videos, graphic modifications, comics drawn on paper, etc. I was kind of proud of my idea to out a selfie stick in the cat’s paw, with a bit of meta commentary… that in the end is a bit more prophetic than I thought.

And then, a tweet from Geoff Gevalt sent me on this trail, a legitimate question of source image

would love to use that pic as a challenge — dialogue with sound. is that yours? who do I credit? thanks.

Back at the original Daily Create, Mariana had done her due diligence to find a source (and later she tweeted how she searched in vain for the original- it was in a tweet

which leads to a site called Old Pics Archive, in a “post” (just the photo and a title) Rare Vintage Photos, Part 7 (42 pics) and a caption of “A dog and cat in Paris”.

No date, no photographer, no linked source. I cannot even be confident that the photo is rare or vintage or anything except that it’s a picture of a cat and a dog.

The entire site is similar stuff – there is absolutely no information about who publishes the site, no About page, no contact. The only information in the footer is:

What are they copyrighting? The photos? The web site? The black color?

A reverse image search in Google sure finds copies of the photo- mostly in pinterest boards and other web site photo archives of unattributed images, an incestuous circle of dead ends. 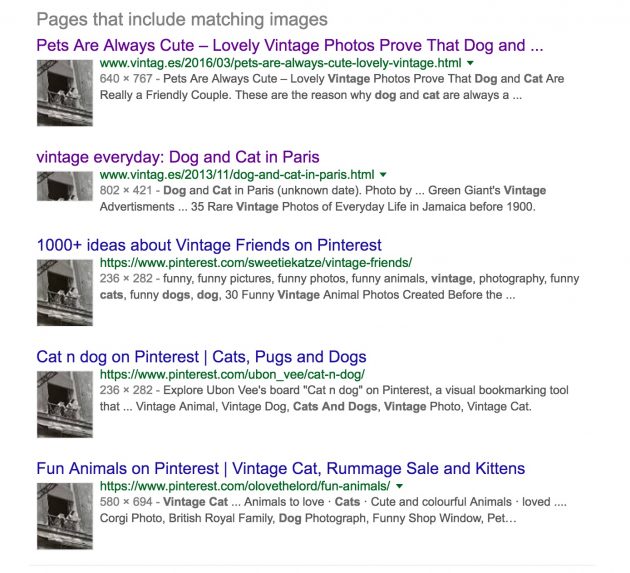 A painter named Jan David Lindgren (Art Lover) published a watercolor version of the photo, and attributed it… to themself.

Ah, but one site has a bit more of a clue. Maybe. The caption on the photo posted November 2013 vintag.es reads “Dog and Cat in Paris (unknown date). Photo by Annick Gérardin”

Well Annick Girardin is a French politician, and I cannot find any evidence that she takes vintage photos.

A few posts cite it as from a book Paris Entre Chats… and so I just bought the book for $3.99 on Amazon.

Because that’s how far I will go try track down a source.

The thing is, the source does not matter significantly to me. I’m rather stunned to see how such a simple thing as a photo of a cat and dog are spread so effortlessly on the internet, and nearly always with not a care as to the source.

The OldPicsArchive is very similar to a fleet of similar twitter accounts that tweet “archival photos” most famously @HistoryInPics. I bet you have seen them, and I bet most people have retweeted them. At a glance they look like public domain historical artifacts, and just the name “History” or “Archive”, an icon of Lincoln all suggest to the quick clicking brain that it looks legit.

I’d recommend Alexis Madrigal’s investigation to the people behind this not so cottage industry The 2 Teenagers Who Run the Wildly Popular Twitter Feed @HistoryInPics — “Meet Xavier Di Petta and Kyle Cameron, ages 17 and 19, whose ability to build a massive audience from nothing may be unparalleled in media today.”

But @HistoryInPics may be the duo’s biggest creation. In the last three months, this account, which tweets photographs of the past with one-line descriptions, has added more than 500,000 followers to bring their total to 890,000 followers. (The account was only established in July of 2013.) If the trend line continues, they’ll hit a million followers next month.

The new account has gained this massive following without the official help of Twitter, which often sticks celebrity and media accounts on its recommended-follow list, inflating their numbers.

As impressively, my analysis of 100 tweets from the account this week found that, on average, a @HistoryInPics tweet gets retweeted more than 1,600 times and favorited 1,800 times.

For comparison, Vanity Fair’s Twitter account—with 1.3 million followers—tends to get a dozen or two retweets and favorites on any given tweet.

I’ve got about 140,000 followers and I’ve tweeted more than 30,000 times. I can’t remember ever having a single tweet get retweeted or favorited as much as the average @HistoryInPics tweet.

I have no idea how Madrigal found them, now there is modern journalism, but it’s a fascinating read:

But strangely, in a world where every social media user seems to be trying to drive attention to some website or project or media brand, @HistoryInPics doesn’t list its creators nor does it even have a link in its bio. There are no attempts at making money off the obvious popularity of the account. On initial inspection, the account looks created, perhaps, by anonymous lovers of history.

Madrigal pushes them on the sourcing:

“The majority of the images are public domain haha,” he responded.

Then Madrigal walks through five recent images, pointing out that actually none were in the public domain (ha ha??)

And thus, the harsh reality:

Facebook, Twitter, and (especially) Pinterest all benefit from people sharing copyrighted images. Visual content—none of which the companies create themselves—drive almost all social media sites. And they pay for none of it.

HistoryInPics is bigger than ever, with over two million followers on that little site called “Facebook”. Their tweets link to a site called All Day, which, if you scan examples like a post on Ernest Hemingway caption the images with a name of the source (no link), many of which are copyrighted (e,g, Getty).

Like the Old Pics archive site, there is no info about the people/organization behind the site. And you can see that the twitter account, the web site, and the Facebook page are all just different channels of the same stuff. The more the push stuff out, the more it gets repeated, and must create some kind of revenue somewhere.

But Rebecca Onion went harder against the pseudo archive sites in a Slate piece Snapshots of History. She is an archivist:

As the writer of Slate’s Vault blog, I post a historical document once a day, running the gamut from the serious (the Montgomery Improvement Association’s powerful advice for successful bus boycotters about to ride integrated busses) to the bizarre (a strange 19th-century millionaire’s pork map of the United States). My goal is to surface compelling, beautiful, or funny items that reward a second look, and then stay on your mind, stoking your curiosity. About eight times a day, through @SlateVault, I tweet another (hopefully) interesting image, a lead on a newly digitized archive, or a link to a good historical read.

And she hits the key here- it’s not just about providing credit via attribution, it’s about a vast sea of web dead ends.

Lack of attribution for the artists who took the photos these accounts use is only the beginning of the problem. By failing to provide context, offering a repetitive and restricted view of what “history” is, and never linking to the many real historical resources available on the Web, these accounts strip history of the truly fun parts: curiosity, detective work, and discovery.

I must admit I adore the example provided of @WowHistoryPics which bends the concept back in a subtle message, but tweeting historical tweets always accompanied by a photo of a piece of toast:

Is history toast by these faux archive sources? Is this just a bunch of huffy academics dismayed because some teens are viralizing history? No, Onion nails it perfectly in her closing:

At its best, Twitter acts as a portal, a place where knowledgeable guides point you to ever-more-interesting corners of the Web. The history-pics accounts treat Twitter as a static medium, where each photograph is a dead end. We might as well be looking at a piece of toast. That’s no good for history, and it’s no fun, either.

So I will go back to my own remix of that dog and cat in Paris:

As they gaze out on the vast landscape of the expansive world wide web, seeking more knowledge, history, ideas, connection, what do they see?

UPDATE: May 19, 2016 As part of this ongoing investigation I got a physical copy of the book Paris entre Chats 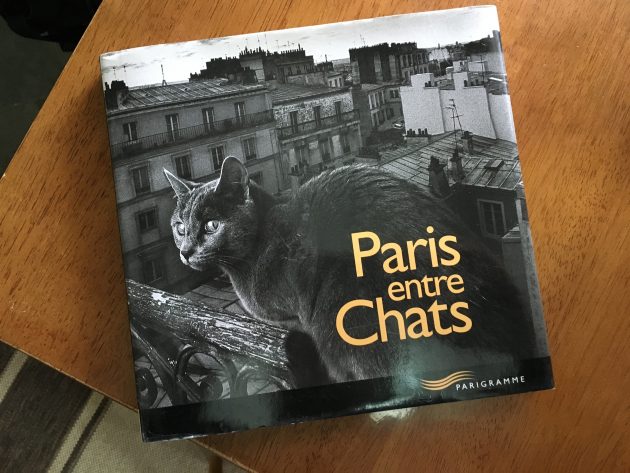 And indeed, on page 21 is the very said photo: 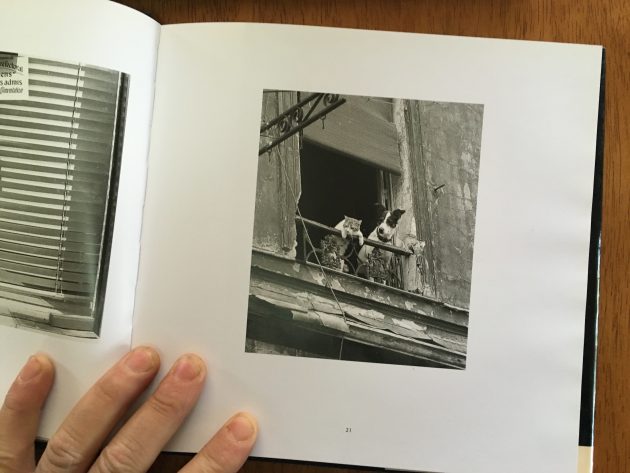 However, the only information on the photo is a list of credits at the back, again just crediting someone named Annick Gérardin. No date. The book has a mixture of photographs from the 1920s through the 1980s, and while they are all black and white, there is no indication of the age of this so-called “vintage” photograph.

Just because it is published in a book, lacking any information about the photo, provides yet another informational dead end. This problem is not limited to the internet, just exaggerated.

I submitted a request for help (using Google Translate to mangle into French) to the publisher Parigramme — I cannot find any contact infomation for the author, Lionel Mouraux.

Stay tuned, this ain’t over.

Cropped version of a supposed archival photo called “Dog and Cat in Paris” who’s origin seems… off in the distance. I cannot attribute it, I sure tried…