You might believe in magic, I sometimes do, but the kind you see performed is technically a method of visual perception mind-messup.

More properly known as sleight of hand, where sleight is on Old Norse word for “the use of dexterity or cunning, especially so as to deceive.”

My dislike of Facebook extends farther back than catfishing (which is to me ore fascination with human exploitation than any damage to me). No, it’s just been a hunch, a feeling, that sensation when you open the refrigerator and smell something foul from the bottom drawer.

I have no proof, nothing but my own manufactured innuendo, but it’s my belief (I can choose magic or I can choose conspiracy, this is my blog!), that Facebook fully plays a game well honed by carny talkers, pickpockets, and street magicians… misdirection. From Wikipedia:

Misdirection is a form of deception in which the attention of an audience is focused on one thing in order to distract its attention from another.

Whatever the heck they are really doing with Instant Articles and Live Media? It’s painted like supporting what the web was designed for. Nope, Misdirection. Everything baked, designed, coded into the Facebook experience is designed for one end- to convince you to stay in Facebook, and experience the goods generated in a non-filtered open web to something refined, sugar coated, steered into your personal assembly time line.

The idea of the internet design and the vision for the web was all about a free flow of information, where not one bit was given preferential treatment. All bits are treated the same, regardless of the message, love letter or hate mail. From the history of the web it’s principles include:

Getting down lower in the chain to my main whipping hobby horse- Catfishing. This is some of the sneakiest sense of misdirection inside the Blue Box of Facebook. What happens 100% of the time when I call attention to a catfish attempt, is people I know, with good attentions, rush to report the fake account. A reporting system makes it look like Facebook is taking action. Even when they take down a fake account, it looks like Facebook is taking action.

That is the shiny thing drawing your attention.

But step back, and understand that the scammers who do this have tools to bulk create fake Facebook accounts for as low as 20 fake accounts for $5. Facebook takes one out, and the scammers have 20 in the wings, all filled out and ready to scam.

The whole exercise, a complete waste of time IMHO gives the illusion that Facebook is doing something about a serious problem. Yet I have shown (I am pretty sure) a clear demonstration of how Facebook refuses to use their own highly efficient facial recognition technology to stop this problem at the source.

Reporting a fake account only gives people the illusion that they and Facebook are doing something. All the attention is misdirected to a symptom, not to the problem.

It goes even further; according to John Johnston, he was able to get one of the 900 (I made up that number) Timothy Bootstrom’s who’s profiles feature my photo (multiple times) on Facebook taken down by labeling it as a copyright violation:

Thanks for bringing this matter to our attention. We removed or disabled access to the content you reported for violating the Facebook Statement of Rights and Responsibilities. We understand this action to resolve your intellectual property issue.

This is a no-reply email that is sent from an address that cannot accept incoming email. Please do not reply to this message. Any replies will not be received.

If you’d like to report something else, or if you don’t believe this action resolved your issue, please fill out this form:

Please reference this report (Complaint #xxxxxxxxxxxx) in your new report if you think it will help us better understand your issue.

If you have any additional questions, please visit the Intellectual Property section of our Help Center:

More or less, the sleight of hand at work here is rubbing out one instance of an issue while completely ignoring the real problem- Facebook readily allows scammers to create fake accounts? Why? Well more users = more claims of world domination = more money.

Yet I see more and more the people I used to enjoy conversing with, mostly banter, largely silliness, but just conversation, seem to have moved that to Facebook.

Damnit, they are. Sigh.

I think I've joined them. Twitter not doing it for me anymore. Frustrating.

I accept it as largely inevitable.

Look twitter is no pure angel of righteousness either, and if you are getting worked up about algorithmic meddling, take a close look at your Google search results.

But I will not be following everyone over to Facebook. I will not take information fed to me through an algorithmic feeding tube. I just cannot do so without mortgaging my conscious away. 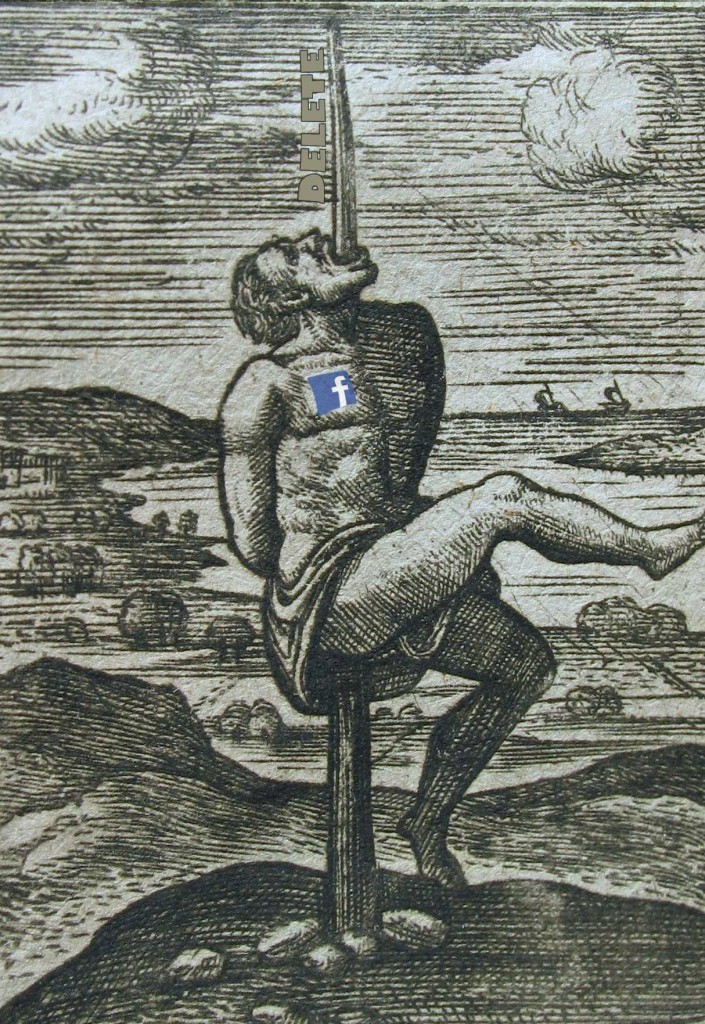 I’ve previously driven a stake through the heart of facebook. No impact.

And nothing I do here will make any impact.

I seek no impact.

But I can be engaged in the open web, in the places that have always mattered first and foremost for 13+ years- in my blog and in my photos. Those are and always will be my primary space, and that has never changed, never slipped one bit. They are mine. I am sad to see abandoned blogs, photo streams, public participation, as friends and colleagues swirl farther down the blue funnel.

That will not include me.

I am keeping my Facebook account, but aim to be making it to be as useless as possible to their algorithms. I do not “like” or “react” to anything. If I have to communicate something it will be a human written comment I will own. I also go in only every few weeks, and when I am done, I log out.

There is no point to any of this. As if the action of one person matters. And I expect my Facebooking friends (I still like you in the pre-Facebook sense) will justify their actions. I judge ye not.

But please wave hello to my real friends (no quotes needed) in there. Tell them I miss them, and if they ever want to connect, I am out here still enjoying the open web.

I will not be taken in by the sleight of Facebook hand.

Top / Featured Image: I searched Google Images (licensed for use blinders on) for “Misdirection” as I had already been using that as a metaphor via Wikipedia. This image of a Hieronymus Bosch painting called “The Conjuror” fir the bill, I added a few subtle logos and some glow effects in Photoshop. The image is licensed public domain on Wikimedia Commons…. well sort of :

This work is in the public domain in its country of origin and other countries and areas where the copyright term is the author’s life plus 100 years or less.