With time you cannot help accruing memories, they just keep happening, piling up.

I’ve read opinions about ed-tech people who go on about how great things were in the early days of the web, or moaning how “twitter is not the same as it was,” are pathetically nostalgic, or worse, for an era that was more exclusive. That would be fair if the nostalgia wraps a desire to go back to those times. I’ll maintain that one can value those memories without any claim that those times were better.

They were just earlier on the timeline.

This brings me to this little book I found in my Shoe Box of Old papers. I’ll demonstrate how old I am, as that is a passbook for a savings account opened for me by my godparents in 1964. Don’t ask me why I have it, but in flipping through it, I see a ledger (OH MY GOD ITS THE BLOCKCHAIN!) a record not literally of my past, but small triggers.

Look at that official sticker on top:

THIS CANCELLED PASSBOOK
SHOULD BE

RETAINED
FOR YOUR RECORDS

It’s so… analog. And, might just be, a bit… metaphorical. 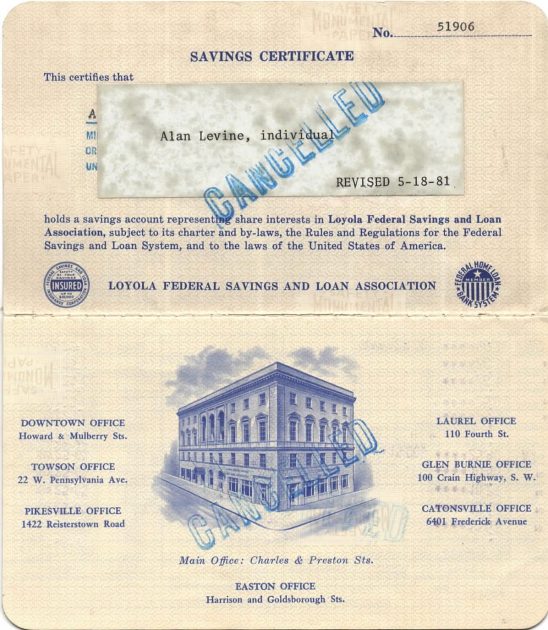 What ever was certified has been obviously CANCELLED, something eerie about that stamp over my name typed, labeled “individual”.

Being official, with Federal Savings & Loan Insurance Corporation seals, the bigger seal is the old style picture of the downtown Baltimore building for Loyola Federal Savings and Loan Association (hey look a web page about old bank buildings in Baltimore). My account was at the Pikesville branch.

This is how banking was done in the old days kids. You’d walk into the bank with cash, or checks, they would then take your money, dial in the settings, and ink stamp the balance in your passbook. 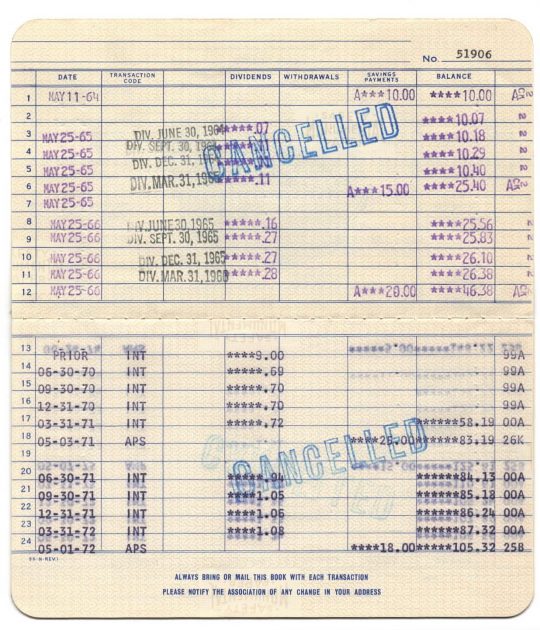 I do remember that my godparents, “Aunt” Martha and “Uncle” George, opened the account for me with a $10 deposit on May 11, 1964, which was after my first birthday. There were deposits the next two years, and than a gap until 1971, those amounts likely cash given to me on my birthday. If I remember correctly, Aunt Martha and Uncle George switched to giving me a $25 savings bond on every birthday; by the time I cashed them in when I went off to college in 1981, my oldest one had doubled in value. 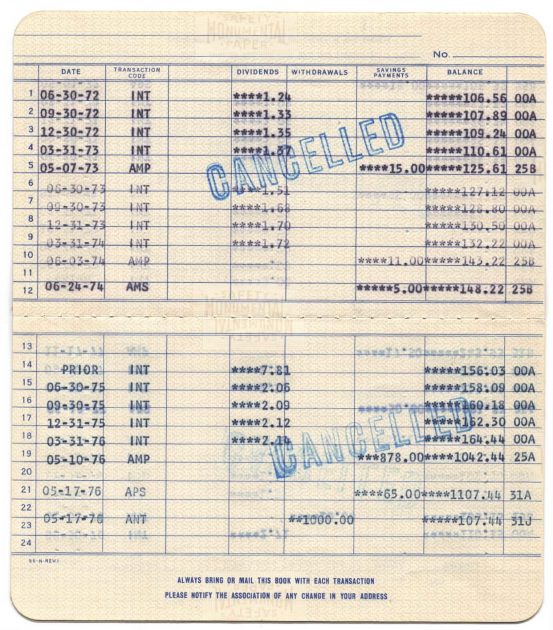 More deposit into the mid 1970s

I put in a few bucks every year, and from the deposit dates, those were likely cash birthday presents. There was a bigger jump in deposits in 1976 with $878 dumped in. That was the year of my bar mitzvah; my hunch is the deposit was the cash presents. I got more i checks, and I think by then I had opened up a money market type account (I have vague memeories of earning over 20% interest in in the early 1980s?).

And then I made the first withdrawal, $1000 in May 1976, knocking the balance down to a hundred bucks and a few bones. I don;t know if I moved that to my other account, but I do remember the big gift I wanted at age 13 was a Real Stereo system, I got an amplifier, turntable, cassette deck, and some large speakers. That might have been $1000 in 1970s money. 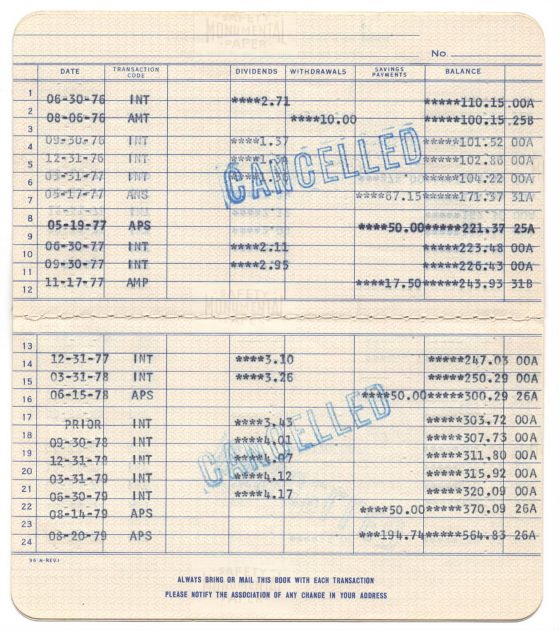 More deposits into my account in the late 1970s

A bit more as flowing in in the late 1970s, maybe from money I made doing things like cutting grass and shoveling snow. I was encouraged to be saving my money to use when I went away to college.

But I know exactly what that $194.74 deposit was for in August 1979. That was my first paycheck, for doing 6 weeks of being a junior counselor at Camp Glyndon. Somewhere in another box is my clutching that check like it was for 100 times the amount. 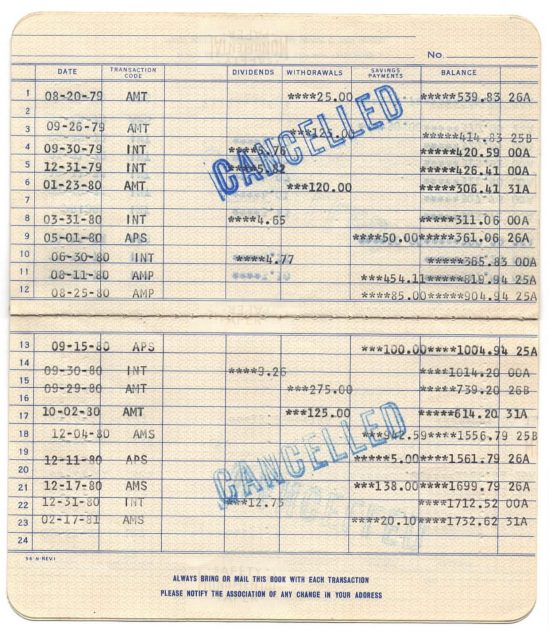 Into the early 1908s the balance went up, with deposits from various summer and part time jobs, a few withdrawals. I bet that $275 in September 1980 was for the blonde Telecaster I bought from the classifieds. 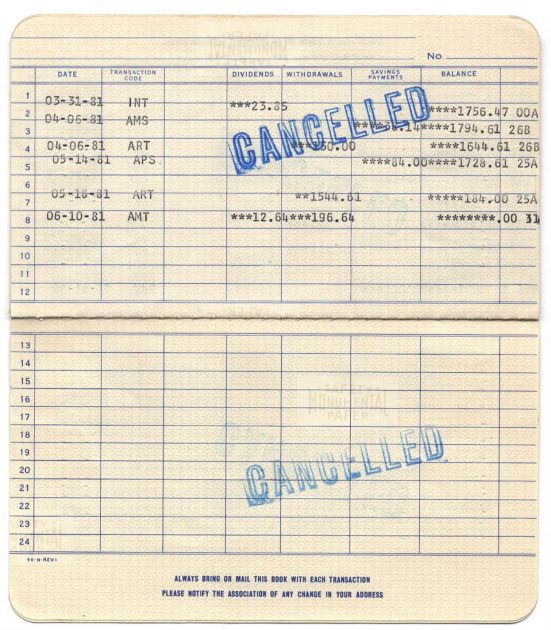 And then the savings era ended in the summer of 1981, when I closed the savings account. I was headed off to college in the fall, and I likely moved the ~$1700 to a higher paying savings account, or more likely took it to a new account at college.

I have no idea how long it took me to spend down that savings. There are definite gaps.

These entries stamped in an old book are no more the actual memories then they were the actual money I put in the bank. The passbook is a reference for my savings, and I think of those deposits and occasional withdrawals similar to what I do here by writing in this old blog. It’s a ledger too, of not memories themselves but triggers.

I cannot remember them all, but even just running through the process, I believe, reinforces the fidelity of what I recall. Stories arise from events, but they live through the re-telling, the re-remembering.

This little book connects me to those memories, to the love and belief in my future by my godparents and my parents.

I certainly do not want to bank this way now. To me, depositing a check via my mobile phone is more future present than flying cars (and more practical). Yet there is something special in holding that old passbook, it’s smells, texture feels like a thread of link to the time of my childhood.

That’s not nostalgia, not in my passbook.

Not in this blog, the passbook of my memory bank, which will be retained for my records– the information contained herein most certainly is important to me, and as long as it is on Reclaim Hosting, it sure will be readily available.

I keep making my deposits in this blog bank, and just let my interest continue to accrue.

I will bank on that.

Top / Featured Image: A scan of the savings account passbook for an account opened for me in 1964 and closed by me in 1981. All photos here are scans from that book, and I will declare a Creative Commons BY Attribution license on the whole lot of them.