Let me start this by saying very clearly that I have been sporadically publishing on medium.com for more than two years; there are some things I really like about the platform, a clean layout, ability to go big with photos, the in-content editing experience, in-content commenting.

They took away one feature I liked, being able to overlay text on full width images (something about not working on mobile, phooey on the phoners) 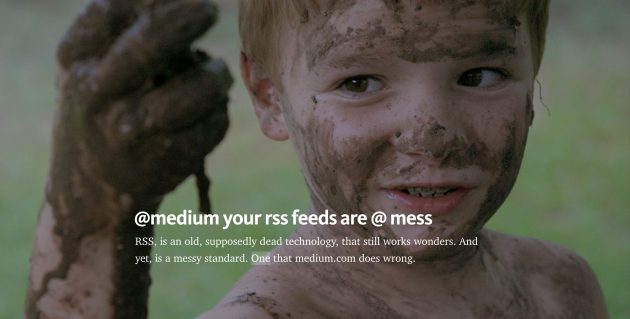 But good on them to leave things like my old RSS rant (which did get response and attention). For a more beautiful use of words over text, see Barbara Ganley’s photo poem “envy”.

I have not really settled into a how and why I use medium. A lot of people are doing it in the spirit of “publish your stuff in many places” so they author on their blog and push to medium (and end with an “originally published at nlah nlah blah.blah”. I have my own personal reservations about spraying stuff everywhere, my preference is to have cogdogblog.com be the authoritative home of all my stuff.

Mike Caulfield has written (on his blog) (somewhere) about this as an approach to avoid your stuff disappearing from being published on the web. Hedge your bets. That to me makes sense of maybe things like media sharing, or stuff posted originally elsewhere, but for stuff I write on my blog first, I know I am taking care of it, and have my backups set.

My approach has been to go in the opposite direction- if I publish elsewhere, I use RSS feeds and Feed WordPress on my site to bring all that stuff home (with a clear indicator of the source). I once called this “Syndicating Myself“. I can use the tag / category features of Feed WordPress to organize them, e.g. all stuff syndicated in. The stuff I bring in includes:

There’s maybe five more such feeds, now inactive, from things like my TRU projects and when I teach, from my DS106 blog.

This is what I dig about the Feed WordPress approach, it is quite flexible- I have feeds from my own WordPress blogs, other people’s WordPress blogs, from tumblr, from WordPress.com, and I can also get stuff by category, tag, or even author from these other sites.

I use the FWP+ Attribution plugin to add a prefix and suffix to syndicated posts to indicate that they were authored elsewhere (see on the live example):

The footer I add to every syndicated post that describes where it came from; I can write a different one for each source

This works well for me.

But I’ve never set it up for the stuff I publish on medium.com. I could make a technical case, while medium.com provides one RSS feed for my account https://medium.com/feed/@cogdog it includes a mix of the “articles” I published there and my responses to other people’s articles (should they be called posts? articles? mediums?) — there is a link for just my published stuff, but sadly, no RSS feed.

There was at one time an option to embed a story published on medium.com to another site, but it was not really an embed, but a tiny preview and a link. Apparently that feature is gone: 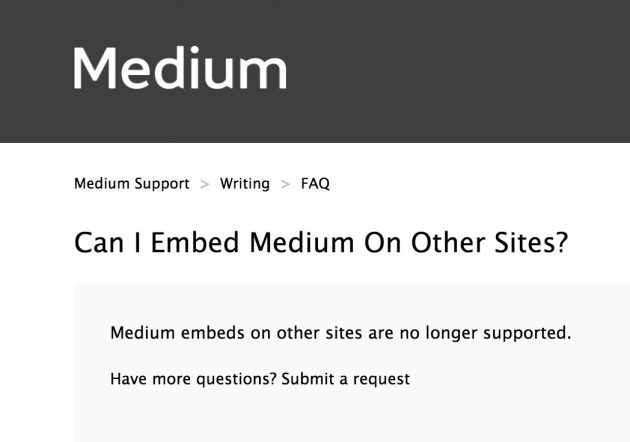 Medium giveth features and it taketh away

Got an explanation? Nope. Just “Medium embeds on other sites are no longer supported.”

This is what happens when you move into someone else’s house. But hang on for that.

Back to what I am doing on medium.com — nothing consistent. My first posts were revisions of stuff I’d written elsewhere. Alone/Loneliness was an expansion of what started as a caption to one photo from my 2008 month in Iceland. And Walking With/Without Abbey was a recast of a rant I wrote in 1995 on my web site, pre-blog.

I saw some value about revising stuff I wrote elsewhere, adding imagery, making affordance of the medium as it were.

But then I just wrote a few other things, just to explore what was different about starting on medium. Rants like I am a Smart-Ass (the Internet was built for me) and @medium your rss feeds are @ mess. And How to be a dickpreneur, This Customer Never Always Right, Wrong but Now Pissed Off, and I Can’t Do Much About Internet Spam.

In my mostly winless fight against Facebook catfishing I took a few of my war to medium– Timothy Boostrom is Not Real and A Simple Question for Facebook.

In other instances, I just used to try some oddball things like writing poetry– I Went to the Forest.

One or two of these got a decent number of views, recommends, as if that mattered. But in a number of cases, I did get comments from people I probably would not have gotten on my blog, so it’s a different audience. There is some kind of mystery machine magic how your stuff gets seen. It goes into some big vat, and depending who follows you or stumbles across your stuff, it gets out to people who don’t stop by CogDogBlog.

All of this leads to something I posted earlier this week as more or less a reaction. It was one those days when medium’s email of recommendations seemed to be all clickbaitish items with numbers in the title. I’d been thinking about so many blogs I read on a regular basis that have gone dark, and that grumbling feeling I cannot stop on my once a week forays into Facebook and see how much people are pouring of themselves into the blue box (I am not picking on you Phil, after all you still use a photo I took of you in 2007 as your avatar)

George, see my mini-blog in the guise of a FB post on this here https://t.co/VgpDjjmZ3t

In some way I understand- when you write in Facebook you get a ton more response than your blog, even if they are a bunch of button click reactions, or two word replies. That said, I saw one of the most beautiful things every written last night by Mike Caulfield in response to a question by Alec Couros. Great things happen in Facebook. But (a) you will likely never find them again; (b) you have to somehow by in the quasi range of people conversion to even find it; and (c) my own unproven hunch that Facebook is evil.

I nodded intensely when Robin Derosa called out

which brought the litany of apologies and “I’m to busy” responses. I am not criticizing or even judging the way people invest their time. I may raise an eyebrow if you claim to be an advocate of openness but your are too busy doing _______ to tell anyone.

Another colleague had written about her choice to give up her blog and just put it in medium.com, it was a common refrain of blog fatigue. It’s probably a thing for people.

So that made my think of a listicle type rant about the people who abandon the blogs for the House of Medium — A Future for 48,000 Formerly Independent Self Hosted Web Sites Abandoned For Medium.com, which to me is so typified by the story of posterous: 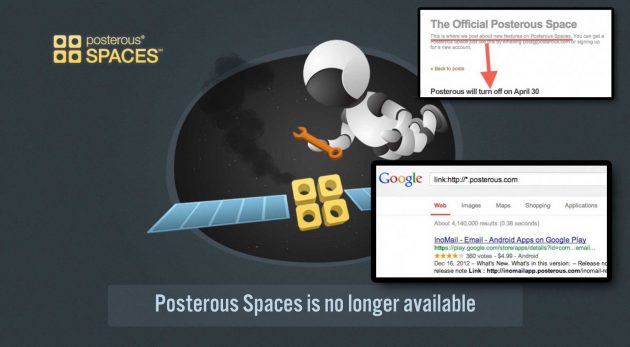 If you are too young to remember posterous, it was a brilliant concept where once could post to the web simply by sending an email. I wrote about it in 2008: Blog by Email? With Posterous Maybe Even My Mom Can Blog.

Isn’t that amazing? I can link to something I wrote 8 years ago, because it’s on my blog. I cannot link to anything I might have written on posterous, because when twitter bought the company, they yanked the plug on all the content.

Pulled people’s content off the web, dumped it into some toxic HTML waste pit.

And my medium.com post? article? thingie? was another excuse to post one of my pet favorite remixes

It was written a tad sarcastically. And I honestly enjoy when I wrote something, someone reads it, and is kind enough to illustrate how mis-guided I am. If I had written this on my blog, I am not sure Boris Mann would have found it, and cleaned my clock with Self-hosting doesn’t help more people self-publish:

I recently added my own domain to Medium. I feel pretty good about my chances of exporting. And I feel great about doing the thing that we all worked on for so long?—?making it really easy to self-publish on the Internet. I’m writing more. I’m enjoying writing.

We don’t even own our domain names?—?we rent them.

Boris suggests “a decentralized, self-publishing system of the future” including publishing from smart phones, server-less hosting, and “No domain names: you don’t need to rent an identifier from anyone else to have the content be ‘yours'”.

@sleslie you need to run one of the version managers (rvm or rbenv); running servers is for suckahs like @brlamb 😉

Now, like then, I felt knocked over by what Boris was saying, intuiting he was right, and her I sit in 2013 sill doing my LAMP work. But his vision does get inside my thought train, and forced me to adjust my thinking.

And all of this came via medium.com.

So it’s not about ripping stuff from other servers and putting it on your own being “better” – it’s not just “My Domain” vs Medium.com, because what Boris is doing- writing on medium, mapped to his domain, and knocking his backups to the cloud– works really well. I’m not sure how many other people are up to doing that, but saying that sounds like an excuse.

It’s not self-hosted vs Some Big Company That Will Shut Me Down Some Day Hosted, it’s all about whether you really have full management over your “stuff”, and if you can, if needed pack it up and go should Medium ever go posterous on us.

After writing this, I still have no direct plan for what I am doing on medium.com– I see stuff I put there not having much loss if it goes away.

I don;t know if medium.com is my size, I am just thinking more clearly about it.

I wrote a few things about being diabetic like Feeling Out of Whack, Diabetes by the Number$, and The Diabetic Roller Coaster is no Thrill Ride

Top / Featured Image: My own mashup of a shirt label image, an Ev Williams mock of the Banana Republic logo rendered with Iowan Old Style font, and the medium.com logo