Drawing conclusions about human nature based upon a small spike in YouTube comments is maybe as questionable as predicting election results based on polls. But hey, this is my data! For a likely inexplicable reason, I have gotten a small burst of comments recently on one of my YouTube videos (a burst on my videos is like somewhere between 1 and 5) about dead drop.

an anonymous, offline, peer to peer file-sharing network in public space. USB flash drives are embedded into walls, buildings and curbs accessible to anybody in public space. Everyone is invited to drop or find files on a dead drop. Plug your laptop to a wall, house or pole to share your favorite files and data. Each dead drop is installed empty except a readme.txt file explaining the project. ‘Dead Drops’ is open to participation.

A dead drop or dead letter box is a method of espionage tradecraft used to pass items or information between two individuals (e.g., a case officer and agent, or two agents) using a secret location, thus not requiring them to meet directly and thereby maintaining operational security. The method stands in contrast to the live drop, so-called because two persons meet to exchange items or information.

In the case of what I was playing with, it sounds ludicrous. Which to me is code for “interesting” — it’s embedding a USB thumb drive in a wall, with the business end sticking out. An anonymous, low tech means of sharing “to pass items or information between two individuals … using a secret location”

My interest came along the tangential lines of my PirateBox / StoryBox experiments, and frankly never took it literally viable.

To me, it was more of an “artistic provocation” — I have a few posts about the antics, including actually inserting one in the rain, as part of a conference session at Northern Voice 2012 (I dare wonder if part of anyone’s conference preparation is bringing a bucket, trowel, and bag of quick mix cement).

Anyhow, YouTube… This is one of my videos, maybe it was the first dead drop. Giulia and I had looked for one that was listed on the site in an alley (it always seems to be an alley) in downtown Toronto. Failing to find it, we decided to replace it, and document the process.

The comments that came this week on that video (which at 5800 views is among my top viewed, never viral-ed, videos) include:

Please do one with a usb killer?

why not use a USB killer?

so… what if people puts usb killer instead a regular usb on the dead drop? and btw yes, you did put it up side down?

let’s hope that no one puts bonzi buddy on one?

USB Killer? I must live in a rainbow unicorn cave. Yup let’s chalk this one up to the Innovators Dilemma?

USB Killer PRO can kill any USB port in seconds!
USB Killer was developed with innovative new technology that has never been used before, and it all fits into what appears to be an ordinary USB memory stick. Inside the drive is an inverting DC/DC converter that charges several capacitors to negative voltage. When this voltage is reached, the converter switches off, and a transistor opens to discharge the voltage back into the USB port. This cycle runs as a continuous loop until the USB drive is inoperable, which occurs in less than 3 seconds.

What is the use case?

USB Killer PRO is useful in a variety of situations. This amazing device can protect your family, your business, and you; and ultimately, it makes world a better place. To help you understand how, imagine being in one of the following scenario:

Home or office break-in – Your home or office has been invaded by burglars looking for valuable personal information in order to steal your identity. They see an innocuous-looking USB drive next to your computer and hope to gain access to its data. However, it’s not an ordinary flash stick. After inserting USB Killer PRO into the computer the USB port is burned out, protecting you and your information.

Let’s calculate the odds of that happening as described. But heck, the world is a better place because of this.

And yes, YouTube Commenters, I acknowledge I put the drive in upside down. I even said so in my video. If you have even tried this, or even thought about it, it’s damn hard (and yes dumb) to push your laptop against a grimy alley brick wall. For about $4 you can invest in a USB extension cable

and honestly, even if I was really doing this, I would never use a device that was not disposable, not my work laptop.

And all of this was besides the point; it’s not about doing this for real (although it was a real exhibit at MOMA) — its about thinking about the idea of anonymous information sharing. Giving the current culture of politics, violence, and hatred in the world, we might need to have ideas for counter-methods of communication. It “might make the world a better place.”

In 2015, I did return to the location of the Northern Voice placed dead drop with Roland Tangloa (it’s around the corner of the Mozilla Office, I expected you to watch over it better, Roland ;-). The funny thing was I did not see it when we were there in person (not even quite sure the location), but examining the photos later and comparing to the 2012 ones… there it was: 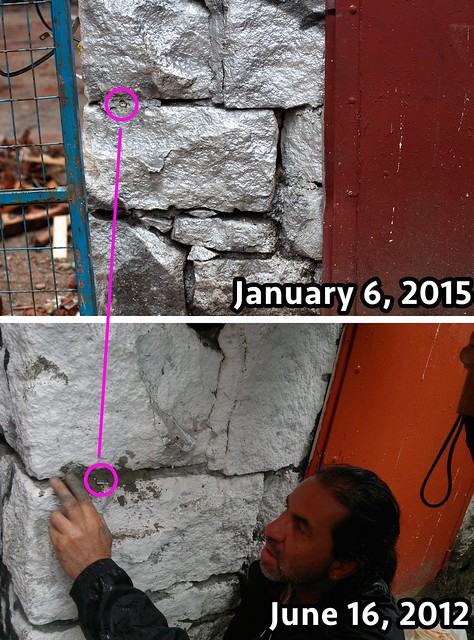 Not quite useful, but in a way, re-assuring that it was still in the wall.

The cliché of course is not to take YouTube comments seriously, or ignore them. They are, generally, a site not to behold. But to deny what they signify, along with racists, supremacist tweets, is a huge mistake. While obviously despicable and easily dismissed/ignored, they are but a indicator of a sea of repressed feelings and hatred that people are carrying around all the time.

My general response to those “why not put a usb killer” on a dead drop, is “Why are you even suggesting that?”

No one ever answers me.

At least Giulia, Zack Dowell, and I, after our Northern Voice presentation, got a pro photograph of us Dead Droppers from Syx Langemann 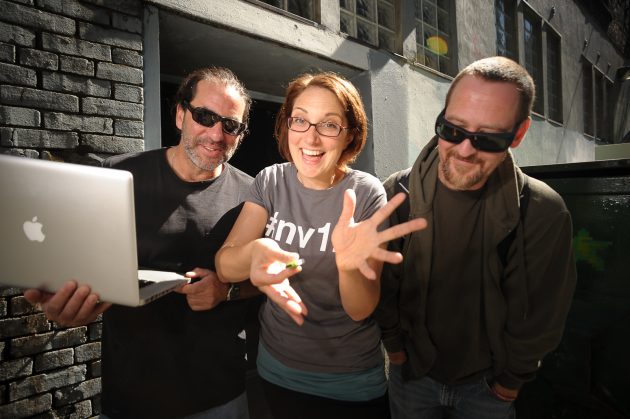 photograph by Syx Langemann he shared with me, I guess I have permission?

And we get to say, that unlike many presentations, we took our audience into a rainy alley and illegally inserted a device into a wall.

Top / Featured Image: My flickr photo https://flickr.com/photos/cogdog/6664034429 shared under a Creative Commons (BY) license of a Dead Drop Giulia Forsythe and I installed in an alley, Fort Erie, Ontario. A bunch of other of my photos from maybe 4 other dead drop escapades (for some reason, all in Canada, go figure).