It’s been years since I even looked at my own site. I made Five Card Flickr Stories back in 2008 (early blog post). It’s likely the first site I built using an API, and because flickr (who always gets sand kicked in their face) is one of the few web services that has not crapped their own API (cough twitter, youtube)… it still works.

It’s a game to build a story from random photos served up from flickr, the idea to make something coherent from five photos that do not belong together in any way. It’s based on a card game (sans technology) developed by comic wizard Scott McCloud based on the old Nancy comic.

In the original game, you cut up the comic strips to separate panels, put them in a hat. You select five random panels form the hat, and choose one to be the first frame of a new story. You go back to the hat, draw five more, and again, pick one to continue the story. You do this five times. The challenge is finding some kind of story that can weave together media that are disconnected from their original story line.

In 2007 or 2008, I was inspired to see the way Ruben Puentedura ran storytelling sessions using a web version if Five Card Nancy (my gawd, that site still operates! Why is it the little independent sites stay running while the big money ones go down the tubes, cough posterous).

Anyhow, I got to wondering if I could make a web version that did this with the same rules, but instead of Nancy comics, it would pull random photos from flickr based on a tag. When it’s done, a player can give their story a title, a description, and save it to the site.

And then this was born 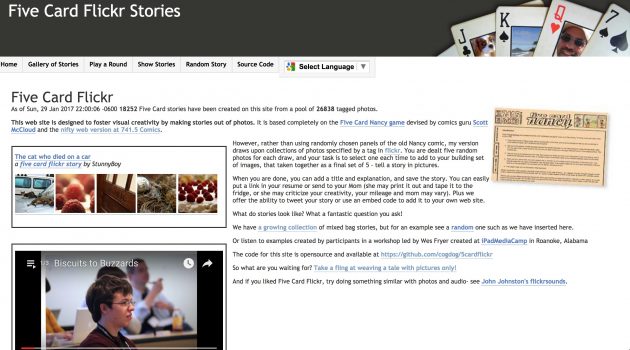 I have been thinking of using it as an assignment this coming week for Networked Narratives, and that was the reason I looked at the site for the first time in eons.

First of all it’s still running. This is totally a built from scratch thing, my own HTML, some PHP that saves to a custom mySQL database, and making use of the phpFlickr library to do the API talking

But not only that, it shows that more than 18,000 stories were created in it.

I decided to make a new “set” for Networked Narratives, and went in and tagged a whole raft of my own photos in flickr netnarr… it was kind of dumb to do so many since flickr only can grab the most recently tagged 100.

I put out a call and folks did step in. Feel free to tag your own photos to toss them in the pool. The more variety the better. Weird is good too.

You can give it a ply by using the link to use the netnarr pool of photos. You can also see the ones a few folks have made (that @dogtrax is a good dog!)

worked fine. On mobile device, too.

I was surprised to read it works on mobile since it was definitely not designed for it. Okay, it’s a bit small, but I did verify it works. 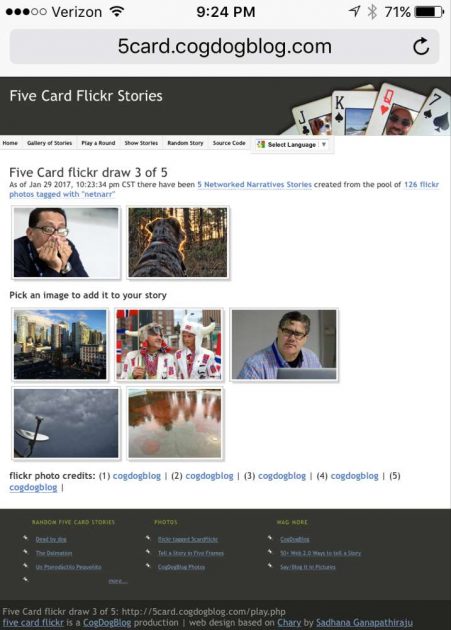 I’m only kind of bragging, but this web site is 9 years old and it still works. It is a part of the web that has not bitten the dust.. because it’s mine, and I try to take care of my stuff.

Top / Featured Image: Still frame from one of the old Timex watch commercials where they attached a watch to the had of an arrow and shot it through a glass tank of water. That watch kept on ticking!