I knew the old car’s engine needed work, but I kept putting it off. Yes, there was advanced word that Reclaim Hosting would be making PHP 7.x the default for all sites, and that support for older versions of PHP would go away. I knew this was an issue for one of mine, the Five […]

Even just writing this title I anticipate the automated spam offering links to poker web sites. Oh well. I can’t pass up a story of serendipity and ancient web technology. The first card is a tweet from Jon Becker, who for quite some time has had his online students at VCU take a spin at […]

Among my fleet of creaky old hand coded web sites like Feed2JS one of my favorite is the Five Card Flickr stories site that is just a few stories short of being 10 years old. I cannot even recall last time I checked in on it. A few days ago, I got this alert Howdy […]

It’s been years since I even looked at my own site. I made Five Card Flickr Stories back in 2008 (early blog post). It’s likely the first site I built using an API, and because flickr (who always gets sand kicked in their face) is one of the few web services that has not crapped […]

I was superexcited when Heather Durnin invited me to visit her grade 8 students in Wingham, Ontario, but the bonus was being able to connect her class with Clarence Fisher’s one up in Snowy River, Manitoba. This came togather over a few emails in the last 5 days, and we settled on a demo and then hands on session with Five Card Flickr Stories done live via a Google Hangout

One of the more fun, but also a bit challenging ways to do this, is as a group, so we had both classes pick the photos for a group story. What is interesting from the times I was inspired this from the demos of Five Card Nancy by Ruben Puentedura, is the discussion of the why for the photo choices, especially as you get to later rounds and need to think about how they are connected.

Our group ended up with a dark mystery involving a strange door, a man perhaps dead or sleeping, and maybe a place to hide a body. But the real interesting part was when the netbooks got passed out and the students started doing their own stories

@cogdog @hdurnin We managed to get a bunch of stories published on our blogs this AM. Was a lot of fun. Great way to talk about story.

There was at least 25 new stories added when the class ended, and likely more were done. Heather had set up a google doc with her students where they each entered the URL for their own stories, plus we had them volunteer to share theirs or nominate another students to share with the group (I like How Heather makes it an option for someone to not share out loud if they did not want to)

I see Clarence has blogged this faster then me, awesome!

in addition I saw inventiveness, like how one student incorporated a flickr image not found right into her story. Another student tried going back in the browser, ended up with 6 photos, but was not able to save (aha a bug for me to fix!).

We also looked at the feature where you can see how one photo appears in multiple stories, like the one of a turtle a few students had used which led to seeing a funny story with an ending perhaps not best for the turtle.

I then suggested we create a story space just for the Idea Hive, which took me about 3 minutes to put in place- so the students interested in adding photos just need to tag them in flickr and they can now use Five Card Flickr to tell stories just from this set of photos .

To make sure it worked, I created this one, from which i can be retweeted, cut and pasted into a blog, or retold with a different story for the same photos

I’m on a code burn. After explaining yesterday how I built a JavaScript fueled site for a random generator, I went on a string of ideas that led me to be exploring ways to access recent photos from flickr using just JavaScript.

Here I will explain how the “flickry me” site works (http://lab.cogdogblog.com/flickry/), which for now randomly displays a full window sized version (that resizes with the window) of one out of 20 of my most recent flickr photos: 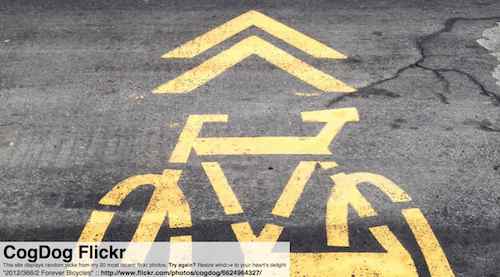 I have built sites like Five Card Stories and pechaflickr in the past using server side PHP using phpFlickr, but got curious about what things could be done just in HTML and Javascript.

This began when I looked at the site for the Backstretch jQuery plugin, which provides the clean sizing of the background image– and I noted that while my previous uses of this used a locla image, that there wa sno reason, as shown in the example there, you could not use one via a URL.

This lead me to wonder what I could do with pulling recent photos from flickr. and a few googly clicks later I found the answer at Hacking Flickr the JSON way:

Here you’ll learn how to get Flickr photos into your JavaScript solutions without having to resort to using the full API. As this is a hack you will only get the latest 20 photos, if you need more detailed data like restricted to sets or more at once you’ll need to resort to the flickr API.

I liked this approach because you could do it via public API calls to flickr, e.g. you would not need to embed your own API key in the source code.

It is quite simple when you get the idea. What you need to do is find any URL for an RSS feed in flickr, these are generally found in the bottom left of a flickr page for the link “Latest”. Some examples:

I was way overdue in rolling some updates into the source code (available on google code) for my Five Card Flickr Stories site. Before my departure from NMC, I moved the site from their servers to my own, so the new main site is at http://5card.cogdogblog.com/ (I left a URL redirect on the NMC site, […]

In the pre-launch fury for the ds106 Digital Storytelling Open Course, I thought it would be fun (and easy to set up) to create a new place on the Five Card Flickr Stories site for us to play. Want to have a go at making a story? Head over to http://web.nmc.org/5cardstory/play.php?suit=ds106. I’m curious to see […]

I have a few upcoming presentations where I plan to use Five Card Flickr Stories so was compelled to try and toss a few more code tweaks onto the bin. The newest is an ability, when a story is published, to see for one one photo, all the other stories that it appears in. So […]