Today was our Networked Narratives twitter chat on What is Alchemy?. I admit I’ve never even been fully on in a twitter chat, sometimes it looks like a lot of Hey the sky is really blue #obviouschat. That’s likely an unfair characterization.

We had our 19 or so Kean University students in the classroom with Mia Zamora. We had done a first activity of doing a Daily Alchemy right there in the moment (it was “Shoe Yang”) and that was very active. Then there was a long discussion on the grading contract.

But the show began at 6:00PM EST with our chat intended for the students (and anyone else) to be able to ask their questions about the history of alchemy — as we have made a theme of this class to being about “Digital Alchemy”.

Just by a chance remark in our planning Slack, John Stewart from Oklahoma University casually mentioned in his studies of the history of chemistry he “kind of knew a lot about alchemy.”

Stop the bus. Check out his twitter banner and his blog. Indeed. 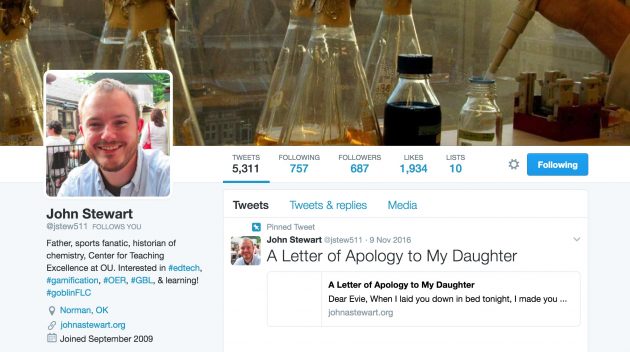 Plus we have Laura Gibbs in the mix, who will disavow being an “expert” in alchemy, but as a folklorist, teacher of mythology, Latin geek, she knows a lot of the era where alchemy was going on.

Our Students KILLED It (in a good way)

I’m not going to even try to recap it much, but have to say our students totally blasted it with not only good questions, but far ranging commentary. Okay I will pluck a few out…

I would say it is sounds a lot like it. The way DNA comes 2gther 2 make something new #netnarr

For some reason human reproduction sounds a lot like like alchemy. I just dropped down to a level "4." #netnarr

Books have so far distorted my image of what an alchemist is. If they are apothecaries, what sort of mixtures did they make? #netnarr

So if the sorcerer's stone is real, I should be expecting my acceptance letter from Hogwarts soon? #netnarr

speaking of Flamel is it true that his tomb is empty? I think I read that somewhere #netnarr

I know in early medicine there was a taboo about dissecting human bodies; were medically-inclined alchemists bound by this too? #netnarr

@jstew511 how does immortality fit into all this? that sounds like biggest slap in the face to the church? #netnarr

Those are all voices of our students. A gem of a surprise was a visit from someone from Scotland who claimed to be an occasional practicing alchemist (and quite knowledgable)

We had a pop in by the famous Howard Rheingold

And thanks to our open participants (I hope I catch everyone)

I am hoping there is some twitter chat archiving tool out there. I had an idea of using storify but found it only pulled out the last 50 tweets for a tag, and I think we had hundreds.

So one option is using the advanced twitter search, which does provide a way to restrict to range by dates (but not time). I am thinking it flips the day at GMT — this is the best I could do for a range that covers the entire chat — it will pick up later tweets, so you may have to scroll down a bit.

But another option we have is that I am running the Twitter TAGS archive created by Martin Hawksey — which not only archives specified tweets to a google spreadsheet, but also does some groovy things to visualize the activity. I have my version set up to look for both tweets that include #netnarr but also @netnarr since people tend to swap them or double up on them.

Probably the coolest thing is the “Conversation Explorer” which creates a network map where the nodes are twitter names — bigger nodes are more active, and the lines represent connections by reply or mentions: 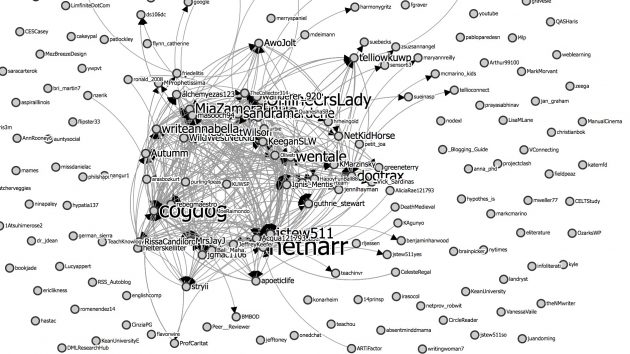 You can grab nodes and watch it move around into a new shape. And clicking any node pulls up their data, like for @stryii 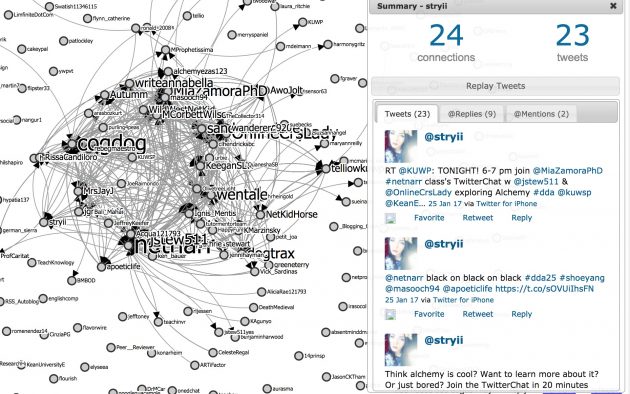 We can see for #mnetnarr she has 23 tweets, the other tabs show 9 replies to her tweets, and the third tab the two times she has been mentioned.

If you think that is cool, wait until you click the “replay” button. I will leave that jaw dropping up for you to experience — go check out the #netnarr Conversation Explorer

But another part of the Twitter TAGS is that it provides a searchable archive, and you can use that right side slider to zero on on January 25, 2017: 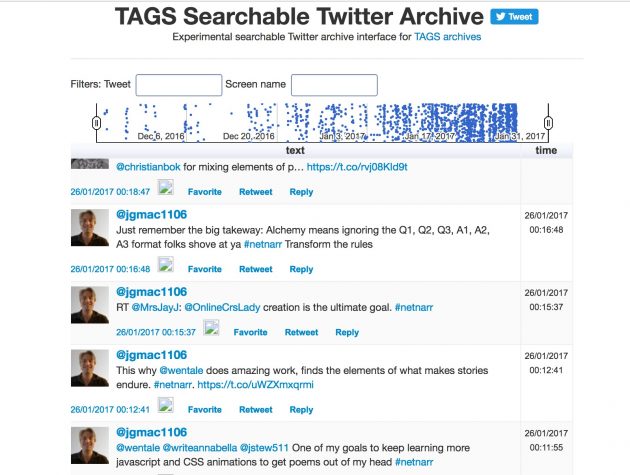 Keegan did some curating http://netnarr.keeganslw.com/alchemy-of-the-twitter-chat/

A totally magical one hour of energy. I cannot say enough about how John Stewart provided such rich answers and examples… we can title him our Resident Real Alchemist. And as always, Laura Gibbs was right in the middle of the mix and sharing her own gold nuggets of resources.

I was really happy to read Keegan’s “thoughts on walking home” — this is the kind of reflective blogging I hope out students do as well:

After participating in this chat I’m extremely excited about the campiness of this course and the openness of the community.

“Campiness” is hard to pull off well. Having another layer of meaning below the surface, especially in curriculum requires a lot of outside-the-box thought and effort. But the benefits of invoking curiosity to inspire more learning are worth it. The campiness formula for #netnarr is great so far.

I’m digging the loose definition of alchemy that has inspired so much creativity and thought. My gut reaction was that this may hinder discussion, but I am experiencing quite the opposite. The community that has come to #netnarr is open to the flexibility.

In fact, as far as I’ve experienced there is a very positive connotation with Alchemy at the moment. May folks tend to see is a a synergistic process and are readily applying it to their coursework and beyond.

All that to say, I’m excited to continue learning, lurking, and growing as a fellow digital alchemists.

Featured Image: Screen shot of the Twitter TAGS Conversation Explorer (maybe one of the coolest things online, Twitter TAGS made by Martin Hawksey)