I might not refer to making Open Educational Resources (OERs) as “easier” but it is more familiar to educators than the idea of creating Assignments that are not “disposable”.

David Wiley described the term “disposable assignments” in a 2013 post on Open Pedagogy. It’s a brilliant approach to talk to educators about designing open materials, and something anyone who has gone to school has endured:

He includes a few examples from his own teaching and others, including maybe the most prolific being UBC professor Jon Beasley-Murray’s Murder Mayhem and Madness project where his students sought not only to add ti Wikipedia’s gaps in articles in Latin American literature, but challenged his students to earn a coveted featured article status.

I remember in 2012 interviewing another UBC professor, Tina Loo who also did a Wikipedia based project in Environmental history. She spoke of the fatigue of seeing the pile of essays she had to grade, knowing full well most of her students would toss them when the class was done.

While David’s original post summarized a few examples where students produced original videos (a personal favorite of mine is the mashup of the Kennedy / Nixon debate as one about blogs vs wikis), it seems the majority of examples is more or less writing textbook-like content.

Nothing against open textbooks, a huge and important movement, but my curiosity is whether there are more options for Assignments that Are Not Disposable (“NDA” is not a good acronym, which may be way Wiley re-oriented the concept as “Renewable Assessments”). Jim Luke blogged about this recently in writing about The Content Trap:

The discussion is not really a new one. It’s the question of how to promote OER. There has been for a while two “camps” or points of view. To simplify (or oversimplify) the question: To expand OER use do we argue the “free textbooks” aspect emphasizing retain and reuse, or do we argue the “open pedagogy” practices aspect and emphasize revise and remix powers. The points are, of course, well made and I’m not writing here to disagree.

Rather, what I want to suggest is that we’ve fallen into a trap by our use of the word “resources”. We need to stop thinking about “resources” period. No more OER.

While I am not interested in making yet another acronym, I feel some sarcastic resonance because my own career in educational technology has made an arc from the 1990s vision of Reusable Learning Objects to 20+ years later of Open Educational Resources. While they are not the same, I cannot help but wonder– have we moved far at all?

I tend to agree with Jim Luke, we see a lot of focus on content. Why? It’s familiar.

This is a long way around getting to the image at the top of the post… here it is again: 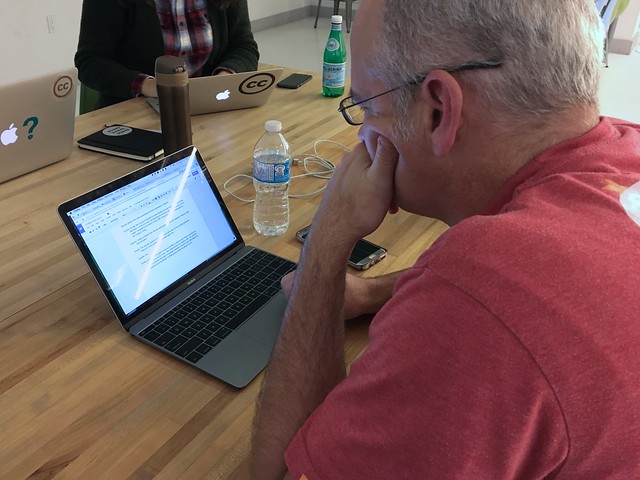 That is David Wiley himself, who is part of our Creative Commons Certification design team, at a working meeting we had in Toronto this past January. For some reason I had in mind the picture was him with his head in his hands in anguish, but he actually looks just like he is concentrating.

A key aspect of our efforts to create a certification was to avoid something where competence is demonstrated by a multiple choice exam. We want participants to do activities that demonstrate application of the principles and tools of Creative Commons, to have them be relevant to a person’s work or interests, and to be seen openly in the world.

While our current effort includes the familiar “content” part, we are also developing what we (well it was my idea) call Quests, using the structure and format of the theme used to power the DS106 Assignment Bank; ours is a “Quest Bank” 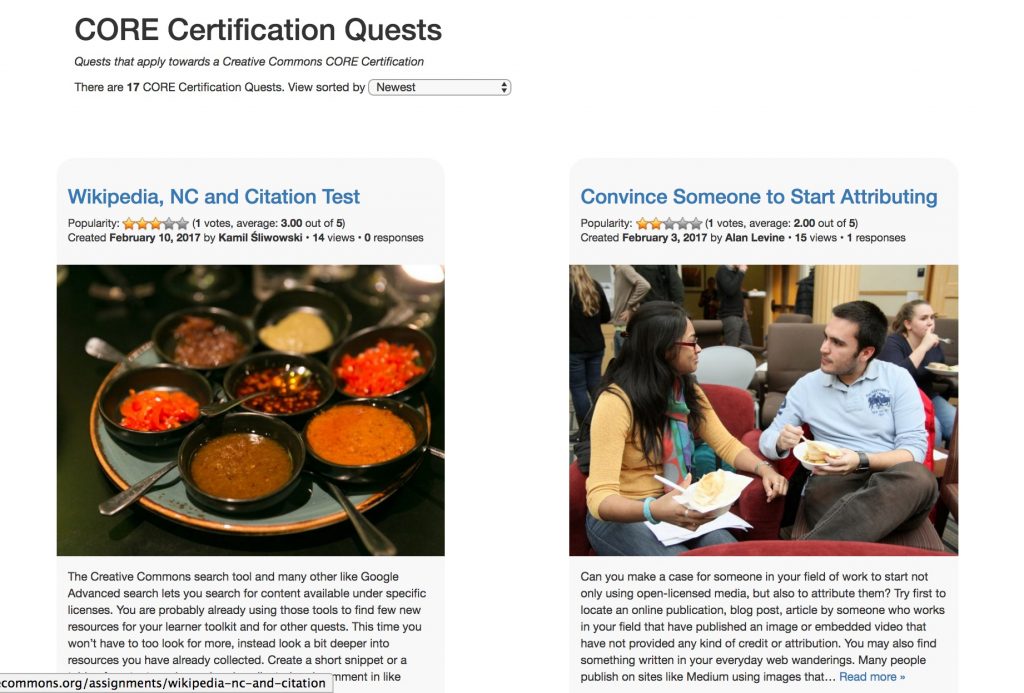 Each one includes a Quest (aka “assignment”) and a place for people who complete them to enter a description and link to their work done to show their response to the quest. These are all publicly available if you want to explore.

Note: The original Quests site has been deactivated, so all links now point to copies in the Internet Archive.

I’m looking at David’s bullet point list under “Open Pedagogy” — we have some significant differences in that we are not offering class nor grades (though the certification itself may be the reward). In the Quest Bank we do have the place for a clear description, which can include media, links etc (see example) and all responses are appended to a Quest as “a variety of worked examples” — and it grows as the use of the bank does. Anyone can vote on the “public rating” which can be used as sorting mechanism to find quests. While remix activities are not strictly built in, it could be incorporated in any Quest’s instructions. And a feature we have that is not on the list is anyone on the site has ability to create a new quest (no longer available, sad).

It takes a lot of effort to move past the first impulse of writing ones that sound like they are answering a question or a series of questions. Those have an odor of “disposable-ness”. Another consideration is considering whether just publishing something into the open makes it renewable e.g. the suggestions of an activity of “adding something you created to the Commons”. It’s potentially useful, but seems on the lower end of the spectrum.

On the first days of our January team meeting, I heard many sighs from David as he described possible ideas and tried writing them up as quests. And then a loud exclamation, “Not only do I have to write it up, I have to do one as an examples!” I tease him here only slightly, he did really take this challenge on and his approach shifted over the next few days.

I by no means am criticizing David’s ability to come up with creative assignments- he has a long career of doing this, and doing it openly. But I think the task changes when it’s not in the scope of a class (different participant motivation) and more so when you may never have direct contact someone trying your assignments.

So I do not want to boast that I have all the answers, but this has been at the core of a lot of my teaching and faculty development work, having created, edited, reviewed hundreds of ones in the original DS106 assignment bank, developing “Studio” activities and challenge bank assignments for the UDG Agora Project, and the hundreds of smaller activities created for the DS106 Daily Create, and similar ones for a faculty development program at Thompson Rivers University, again for the UDG Agora Project, and currently for the Networked Narratives course.

Now these are mainly assignments about media creativity, but all are ones where work is published openly in so many formats I cannot list. They are ones where people are doing them without direct contact with me. It’s debatable whether these “contribute to the public good”

And again, I am not claiming at all I know best how to create non-disposable / renewable assignments. I think I have a good hunch for thinking about them. My thinking includes:

Here are some of the ones I’ve written already:

I am too challenged for some of the units to come up with an activity (hence we we hope others might chip in and create their own). But because the work of Creative Commons is done in the open, we feel the work people do should be there too.

And I am less interested what we call these things, and more interested in just trying to create and have people try them out.