“Open” as a descriptor of things is clear. A door, a faucet, an electronic circuit is open or closed. It works as well for learning things, e.g. educational resources, by a number of licenses.

But applying open to concepts like pedagogy as witnessed by a long twitter ping pong and a Grand Groomian post if anything gets messy if not muddy. And what happens if people take it as a descriptor of themselves?

Binary “open” fails there. Maybe a more nuanced “openness” works better. Or is that just semantics?

While thinking on this (I happened to be outside walking in the forest) I rewinded back to a 2012 online keynote I did on the blurriness of online identity. The video was made while I was working then at the University of Mary Washington and I had the chance to interview some students in a class Martha Burtis was teaching on this very topic.

I made a deliberate choice on doing these videos to not film the student’s faces; it was their voices that were important. So I had them pretend to be typing on keyboards as they answered my questions.

The first student described online identity in an interesting way that has stayed with me.

I wouldn’t actually say that the online identity is a separate identity than the in real life identity (the IRL). I would say that it’s a broader target zone. Like if you think of identity as a kind of circular pattern, the focus center is what you present in certain circumstances. It’s very narrowed considering the social context of the environment you are, like you would narrow your personality down for what’s acceptable in a job interview or when you are conversing with your parents or if you are conversing with your friends. But on the internet it’s a little more nebulous and you’re free to be a little broader, a little looser, you can play things by ear.

It nearly always seems that we describe identity as a singular thing, but her words and the animation of her hands describes it more as a fluid thing, that we adjust constantly and with different contexts. I always thought she said the word “iris” like the opening in our eye, which adjusts constantly to match the light levels in our environment.

Openness isn’t a race or a game. In fact, just like privacy or security it’s about weighing up opportunities and risks. I alluded to in my talk that while I reaped the affordances of open and connected learning through open courses Picbod and Phonar, I recognised the risk of sharing certain stories and I actively thought carefully about what was open, closed, private and public.

And because I first came across Kate in the photographic context of the Phonar class, my mind jumped to cameras, and the aperture mechanism inside of them.

Without camera-splaining too much, the principles of photography center on how much light falls on film or a sensor. This amount of light is controlled by the aperture size, a hole where light shines through, and a shutter that controls how long the hole is open.

A big hole with a quicker shutter speed sends an equal amount of light as a small hole with a slower shutter speed. But the results of the picture are not equivalent. A smaller hole means the light rays come on more parallel, and so you can get pictures where the foreground and the distance are all in clear focus. but with the aperture wide open, the light that enters is a bit more scattered in the direction, so you get the shallow depth of field where only the subject is in focus. 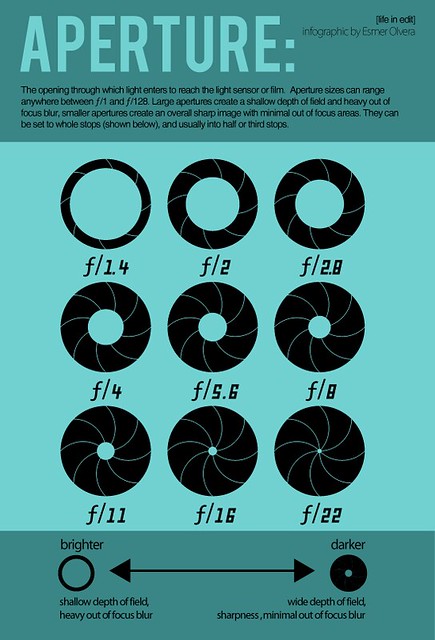 As an experience photographer with a camera I can control settings, I user Aperture priority, which means sometimes I know I want the big hole and sometimes the small. With a more automatic camera or the one in your cell phone, the circuit is changing the settings all the time to compensate for different light conditions.

My long winded point is maybe we ought to think about openness as an aperture that is not just fixed at one size, but continually adjusts, as Kate suggests, with appreciation opportunities and risks. There is no single “open” setting applied to pedagogy or people. It’s variable and shifting all the time, like the student in the video suggests, based on context.

I’m not confident this does much in terms of defining open _____ or is advancing any grand vision, but then again, I loathe definition squabbles.

I’ve tried making the camera metaphor work before and it’s a bit tricky to take it too far.

But thinking about open or openness a variable, context-dependent factor feels more appropriate than pinning it down to a single entity or something described by rules. 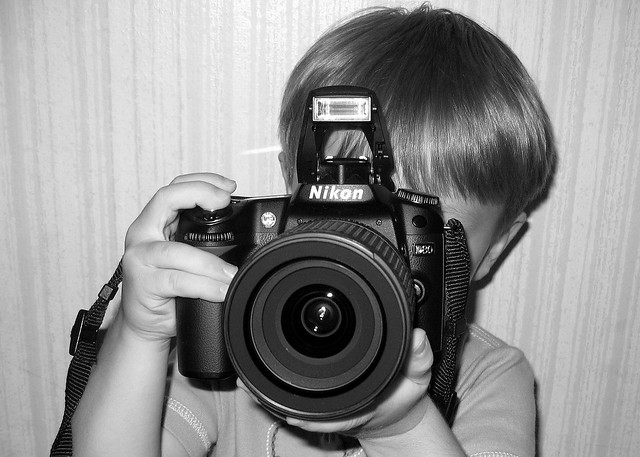 Featured Image: Aperture in Canon 50mm f1.8 II lens wikimedia commons photo by Gophi shared under a Creative Commons BY-SA license. My preference would have been an image of the f/1.4 lens the nifty fifty I cherish.