While the Networked Narratives course I am co-teaching with Mia Zamora is not a ds106 iteration, it’s definitely in the family.

Students and open participants are participating in their own blog space, we are syndicating posts into the course site, and there is also a daily create like site.

Like when I teach ds106, our Kean University students are tasked with submitting at least two ideas for the Daily Digital Alchemy. Just this week, one of our students wanted feedback on her ideas as submissions.

My neurons snapped at this one

Shuffle through songs on your playlist/phone/Spotify/iTunes(??) (idk what kids use these days) and see if some titles line up to form a sentence/poem/conversation/etc.! If that’s impossible, use a few song titles to inspire a mini-story. Bonus points for expanding the story.

because of one of the earliest student submitted ideas to the DS106 Assignment Bank, submitted by “callean” February 4, 2011 (the second month of the first open course):

Write a sentence (preferably somewhat coherent, yet on the nonsensical side), a poem, or a quick story using the titles of songs you have in your Windows Media Player (iTunes may possibly work as well). Print the screen. Paste it in Microsoft Paint (or some higher-end equivalent). Save it, upload it, and share. If you could even respond to the one I originally created as a challenge (possibly even embed it as a comment on that blog entry), that would be even cooler. 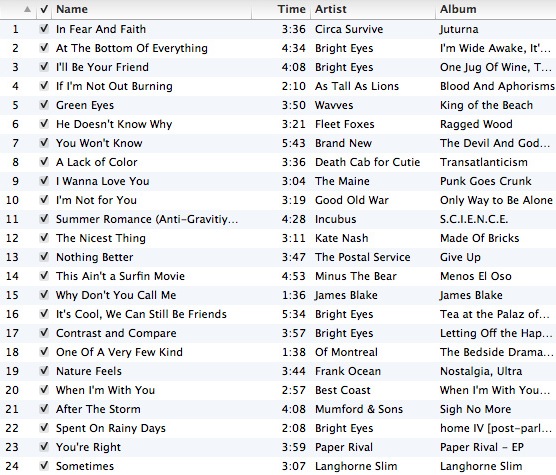 It was an idea none of the instructors had thought of, and maybe never would have thought of (sorry Jim and Martha), and that’s what made it electric- the sheer originality. It took off, and I remember the mad rush of excitement as people tried it out and shared it in their blog.

You can find 30 responses linked from the assignment, the total was likely more, but we lost a lot of links from people nuking their blogs.

It was a significant response, and whether you think tying to create a story from stacking the titles of songs “counts” as story or whether this is an OER or if it has a creative commons license attached or that I cannot accurately tell you how many times it has been remixed, you have missed the open pedagogy in action here.

I’ve seen that happen so many times in DS106 this blog is not big enough to post them all.

Nor should I point out that in the Spring of 2017, 6 years after the first course, DS106 is still chugging along.

Since 2011 the original cMOOCs have come and gone, the xMOOCs soared to the heights of the hype curve and pivoted away. Yet there is a site with over 70,000 syndicated participant blog posts, over 1000 contributed assignments (with 12000 plus responses), over 900 consecutive daily creative challenges.

Since then, a total of one researcher have explored it’s data. I guess it’s not open enough.

So that’s why I had to gush appreciation to my current student, who came up with a similar idea on her own. Cue Kirby Ferguson?

Not only that, my student closes her email:

Should I send examples of each, too?

When you see her first DDA on April 9 published you will see how proud I am our current students because of the way she frames, describes an assignment, then takes the step to do the assignment, and post an example.

Her daily assignment submissions and others in this class are so much better formed than the typical ones I see in the DS106 site, often on par with simply “Take a picture of a pie and a bicycle”.

But alas, there are no explicit licenses of sharing here, no OERs, and so probably it’s probably not open pedagogy.

I will take lightning twice again.