Sorry I have not blogged for a decade…

I set up https://cogdogroo.wordpress.com/ in 2007 for a speaking/presenting tour of Australia I did in October 2007– well it was every capital city in two weeks, a bit mad cap. But I did manage 75 posts starting back with planning in February.

So it’s with some interesting irony that almost exactly ten years later I am back on another invited tour (actually I have been to Australia maybe 5 times in between), this time in Victoria to do presentation and workshops arranged by the International Specialised Skills Institute (details are still being finalized).

Thus I am reviving that blog… because I can. It was due a new look, this was how it looked a week ago, still sporting a 2007 vintage theme 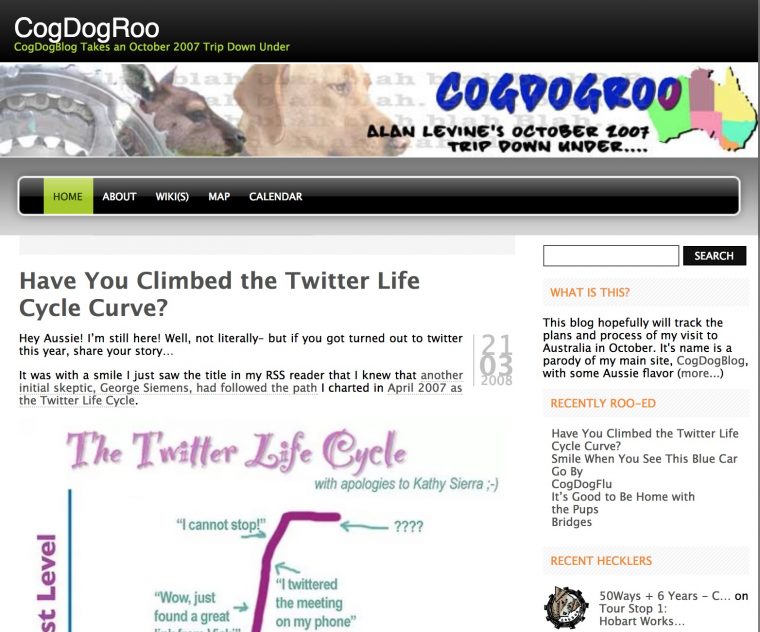 While this blog was in its youth then, I opted to use what was a relatively new (it opened in 2005) hosted WordPress.com- some to learn it better but also to promote the kinds of tools were publicly available. Likewise, I hung all my workshop materials on a Wikispaces site http://cogdogroo.wikispaces.com/ — and amongst the large pile of web services that have bitten the dust my Wikispaces site is rock solid 10 years later.

This was the birth of the project, from a half thought out idea and metaphor, that maybe propelled much of my work in that decade, 50+ Web Ways to Tell a Story. It’s rather interesting to see what I was talking about ten years ago, in addition to web-based storytelling tools:

Actually I used a second wiki service (I think then it was called PBWorks, it’s tagline “making a wiki is as easy as making a peanut butter sandwich”) for planning purposes, so reps from the places I was visiting could feed me ideas. And that one is still alive after a decade!

Despite the luck of those three old hosted free sites still being alive, I’m much less inclined these days to hang my work anywhere but a domain of my own. So the workshops and presentation materials will be at http://cog.dog/roo (see what I did there) as a WordPress Multisite. My workshop descriptions are for now in a Google Doc, but will move soon to my web sites.

I owe a big thanks to Brad Beach at Chisholm Institute for the invitation and planning. I met Brad on my trip in 2007. And also, to Nancy White who recommended me a year after she did the same institute last year. The parallels could not be more perfect, because my visit in 2007 as a Flexible Learning Leader, was… a year after Nancy was one on 2006. I’m following in her chocolate shoes again.

On this decades trip I will be in Melbourne Nov 4-21, also getting a chance to visit Seb Chan at the ACMI and catching up with my DS106 pal Rowan Peter. And to do some photowalks with Michael Coghlan (who took that photo of me in 2007 used in the new blog post)

My flickr buddy @mikecogh found page which uses photos from both of us https://t.co/5roy9SYcu6 A few weeks we shoot together in Melbourne

Then I’ll be trekking north to Wagga Wagga to visit Tim Klapdor and Charles Sturt University, and then a trip to Wollongong to visit Kate Bowles. 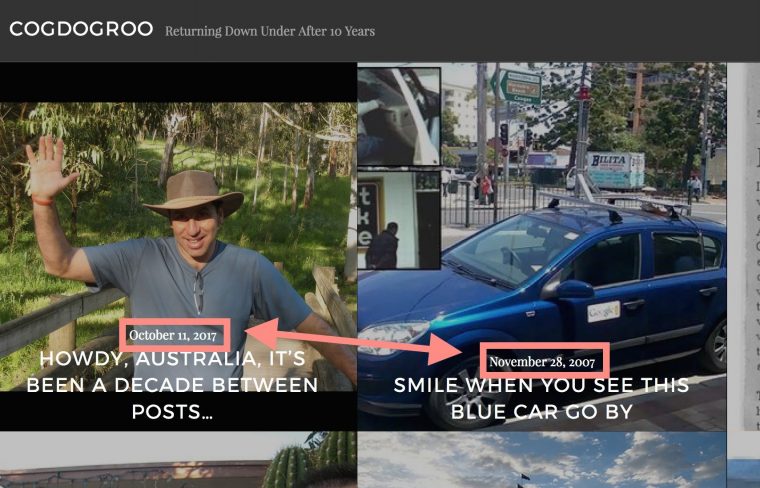