While nervously planning my first major event at the Maricopa Community Colleges as a young instructional technologist my stomach was a mess. My mentor, Vice Chancellor Alfredo de los Santos, assured me that all I needed to do was to get people in the room and something worthwhile to do.

Like many of Alfredo’s sayings, that one has held true.

Today was the third weekly online gathering (via Zoom) for the Extended Lunch sessions
I’ve been hosting for the eCampus Ontario Extend project.

The idea is just to set up a time to meet, and talk about whatever comes to mind of people who show up. How often to we get such unstructured time? And today worked well with our group of @stevensecord @IrenequStewart @ProfessorDannyS and @NurseKillam. 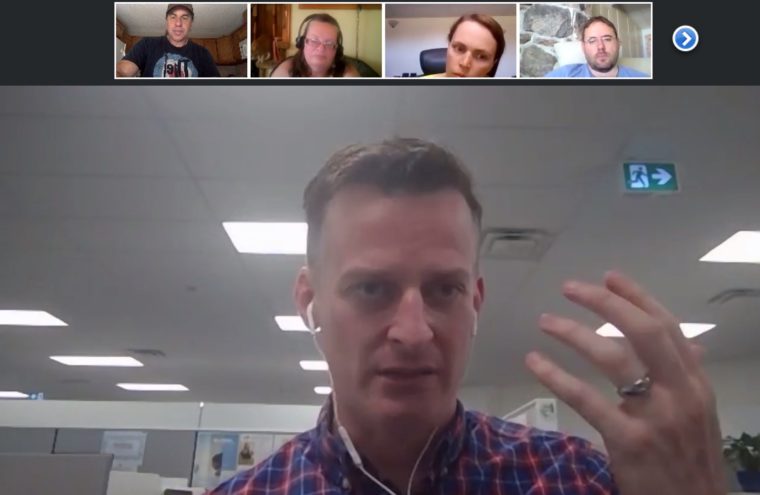 Danny has this idea about to unleash on us…

Several folks still mentioned some struggle with the Extend Modules, especially the Scholar one (see the video conversation I had with David Porter on the Scholar Module) and also the Technologist one. I urged them to interpret the activities in a way that makes sense and meaning to them (e.g. if their faculty role was different that having a class now, there are other places/approaches for doing SoTL research).

We quickly went into some news shared by Danny about Microsoft purchasing Flipgrid, and many of the features that were fee-based would now be free. It’s a platform for posting video question and response discussions, with many features for setting up (e.g. limit to 90 second responses).

Flipgrid is where your students go to share ideas and learn together. It’s where students amplify and feel amplified. It’s video the way students use video. Short. Authentic. And fun! That’s why it’s the leading video discussion platform used by tens of millions of PreK to PhD educators, students, and families in 150 countries.

Irene noted that for accessibility it’s a great feature that automatic close captioning is built in, and as Danny reported, transcripts can be downloaded. Laura asked in chat if it can be used with an LMS, and I believe there was a “yes”.

Several said they use it as a way for student introductions. And it has been used for a previous Daily Extend (authored by Steve). But what other ways might it be used? It was suggested for in-class students to record concepts, teach each other. From the FlipGrid website:

Don’t just ask a question. Expand their world and ignite a discussion! Foster previous experiences, share a booktalk, discuss current projects and events, delve deep into STEAM ideas, or collaborate on anything. If you believe it’s valuable for students to verbalize their learning … that’s a Flipgrid Topic!

You are 100% in control. You can moderate videos, provide custom feedback, set the privacy rules, and much more.

We had a bit of round robin of talk about, for productivity software, whether people are “Microsoft People” or “Google People” (or “best tool at the moment” people).

"Several popular YouTube accounts including those belonging to ‘MIT OpenCourseWare‘ and the ‘Blender Foundation,’ have suddenly had all their videos blocked." https://t.co/a4Z9DE70MU

The latest update to this story suggests the issue has been cleared up, but we recognize that Google/YouTube gets to call the shots (and also, hosting video servers is no fun at all). I was able to watch this beautiful animation (and be very drawn into it) by the Blender Foundation, one of the organizations thought to be affected.

We talked a bit about domains of ones own, and how that was something available to Extend Participants. Laura shared some info about how she uses her domain nursekillam.com.

I’m planning on running a four week mini “Domain Camp” starting July 9 as a way for people new to domains (or experienced) learn more about how things work and what is possible).

Then, inspired by this tweet stream by Jesse Strommel, was a lively discussion on plagiarism, the role (and problems) of tools like TurnItIn.

Not all tools can be hacked to good use. https://t.co/VVpD6Br2M9 pic.twitter.com/mi38Nhd1OW

And in what I really like seeing happening in this kind fo gathering, Danny asked for some feedback on dealing with an issue of grading participation in group projects. Not quite of relevance, I shared how in one of my DS106 courses where students did group radio show projects, one group cleverly did a show, “The Science of Group Projects” about dysfunctional group projects! I found a link (maybe for my own nostalgia sake)

Danny noted that he tracks what people do in groups by having students communicate in WhatsApp groups. There was some interest in asking Danny to do a demo for us next week.

Yes, the hour went quick, but was really engaging open discussion. I’m putting out a challenge next week for our lunch crew to recruit a colleague to join in, we have room at the table. And also this suggestion:

We needed a 2-hour lunch lol … maybe next week we could talk about blogging … to separate the aspects of the self or not? It felt weird to blog about family and teaching things in the same place.

The lunch table will be open next Thursday at 12:30pm EST, pull up a chair and join us.

Featured Image: Pizza photos shared to twitter by @thomcochrane – a friend and colleague from Auckland New Zealand, who inspires me with his home cooked pizzas (I’ve sampled them in person). As far as licenses for tweeted images… well who know what? I’m fairly sure Thom would be okay with this.