Better than getting an A on the geometry test, it’s more exciting to use a magnet to attach Episode 218 of the Teaching in Higher Education podcast to the front of my fridge.

I was excited when Bonni Stachowiak DM’ed me asking to record a session. I’ve seen a number of folks I know get an interview, and had crossed paths with Bonni (I think) at the last DML conference I went to.

Without too much more self horn tooting, here is my 39:43 of podcast fame in the episode she title “Courses as Stories”: 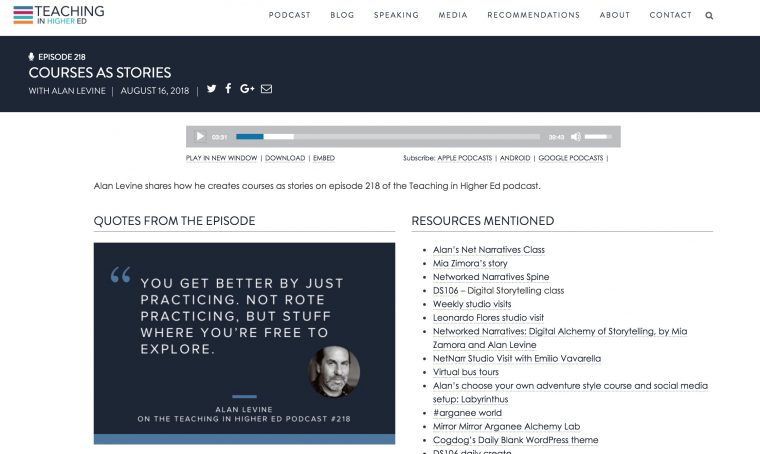 I was even more excited when Bonni mentioned wanting to talk about playfulness in teaching, from her message:

Playfulness is one of the things I hope we can talk about. One of the examples I have shared in talks I have given about a gazillion times now is your use of the menu item that says, “Don’t click this” – that is practically begging the user to click on it. I want us to be more playful in our course designs and help our students be more emerged in their learning. Your fun side definitely shines through…

What she is referring to is a thing I added to the top right corner of the site for the Networked Narratives class I have taught/co-taught the last 2 years.

It’s because in my lazy WordPress theme choosing, I used the same theme I use on this blog and also used on a (now aborted) project for Creative Commons. I recall one or more people not really knowing what the hamburger menu icon (?) meant (in the theme it reveals a widget area / menu area that overlays the page in view) so I modified the child theme I use to put “open” next to it, e.g. “click here”.

I decided to make it more tempting on the #netnarr site, so I made the text something no one would ever click: 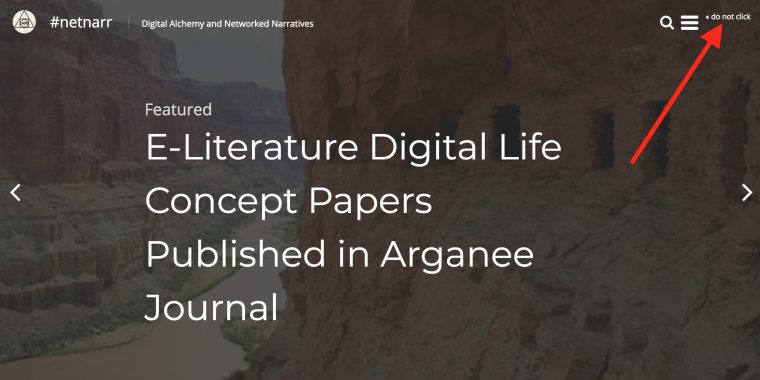 As we talked about in the podcast, that (and more in the course design) is a direct descendent of things I did in ds106. It’s a way of thinking about what drives a course- is it really a syllabus or content, or can it be a narrative itself?

I’m so glad Bonni and I got to talk about this notion that has been swirling in my head, going back to things Brian Lamb and I did in the You Show and also the videos Mia and I did in NetNarr.

Most uses of video in online learning revolves around either content or professors talking to students. These ones we did were not even essential to the course itself, but was more to weave a narrative arc through the class. In many ways, it was more for us as instructors to work on a tying theme, and to think about what we were doing.

A recent tweet from Jon Becker I cannot seem to find now referenced a post he wrote in 2015 on Courses as Narratives, and we are in parallel thinking fields. But at the same time, Jon’s examples of course trailers, a course web site, innovative syllabus design do show story approaches and elements, I keep aiming at what it takes to make a narrative the force that drives a course, not adds sprinkles to it.

I’ve been self mumbling for a while about maybe writing this up as an article. But hey, there are blog posts to be written. I found about 29 entries in an Evernote notebook where I have been collecting resources like Jon’s post, but hey, at one time I even started writing this out:

Why I spend hours creating videos that are not course content

Excuse the sin of a bad metaphor, but as much as students we teach are shaped by the popular culture of the internet, my influence was of a different media era. It was regular shows on channel 45, the UHF frequencies in Baltimore. If you are of the same influence, just the mention of the show “Gilligan’s Island” will trigger the theme song in your head, your mouth forming the words “a three hour tour…”

Gilligan’s Island had a premise– a group of unlikely people shipwrecked on a tropical island. And while each week there was some event that gave them some hopes of escape, it never happened, if so, the show have not worked. There was no long term plot to Gilligan’s Island. Every show had a predictable script that ended neatly (and exactly the same) in 30 minutes.

Some forty (?) years later, a different TV show mesmerized many with again the story of people who would not have been drawn together having to do so to survive on a desert island. In Lost, it was not a tour, but a plane wreck that put people on the island. As Henry Jenkins and Steven L Johnson talked about at SXSW in 2008, the difference between TV shows like Lost and The Wire, compared to the sitcoms I grew up watching, was a more complex sophistication of the plot, unpredictability, a sense of mystery, that ultimately drew fans in to the narrative (c.f. Lostpedia).

While both Lost and Gilligan’s Island were delivered via the same medium, and produced with commons approaches of scripts, producers, set designers, it was the storyline of these two shows that could not make them more different.

The primary plot device of most courses is the syllabus, the content it aims to cover, and addressing of the outcomes of an official course description. Not to say your class is like Gilligan’s island, but its rhythm of weekly readings, lectures, mid-term essays, and a plot resolution of a final exam are as well known as the old shows and their theme songs.

I want to share some examples of a different approach to courses where there is a plot device propelling them. This is not to diminish the use of a syllabus as a program guide, but in developing a way of teaching that is not solely driven by the syllabus. This is not a time-saving trick to balance your schedule, in fact, I spend more time with my plot devices that might be recommended. But there is a larger payoff in what it does for my energy level in going about the course.

Thanks Bonni for the time and interest to talk about this conversationally, and get me thinking again about picking up the writing.

And as a wee present, there is something for Bonni in the part of the NetNarr site she was drawn to (by all means do not click it):

What a wonderful treat to see on return from a 5 day camping trip off the internets. Thanks for the conversation, Bonni.

And check that do not click link again, there's a treat for you. https://t.co/26fD1z0e7Y 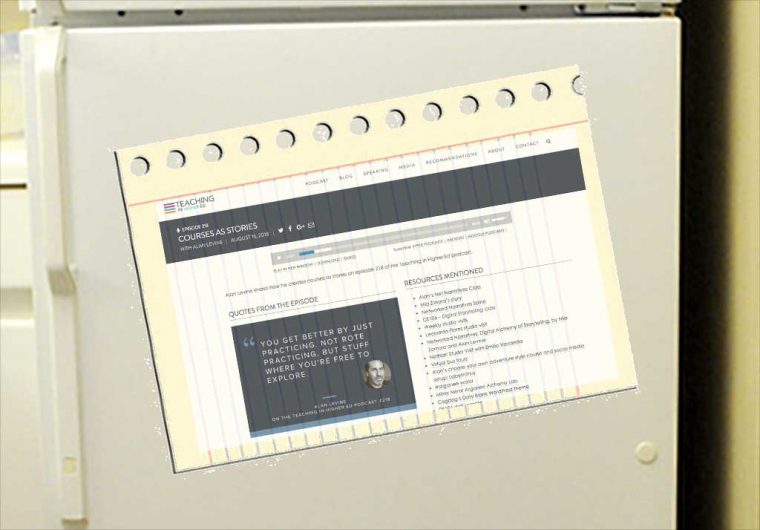