It was one thing to be in a discussion about Creative Commons license and then right after, get an email request to use one of my CC licensed flickr photos for a music group’s release, but last night’s email brought even more wonderful irony.

A rep from an ad agency asked if their client could use one of my photos for a commercial advertising project, except they were asking to use the image without attribution. I was curious to look at the image as the bulk of mine are public domain. As it happens, when I changed my flickr photo licenses from CC-BY to CC0, quite a few were not changed (the batch change tool failed for a collection then of 50,000 photos. I gave up trying to get this done.

Lucky me know, the goof gets more some $.

You see they are offering me money for this use. Had the photo they wanted been changed to CC0, they could have used it without attribution.

The money they offered is quite appreciated, especially as I sit between paid work right now. The last time I got money for a photo, it was $25 for a textbook publisher; this is an order of magnitude more.

But then I thought, “Self. You just wrote about not taking photos to get paid. And you give away photos are the time, why take the money?”

I’ll say I’m taking the money because they offered it! I am a capitalist, heh, and not against getting reward for my craft, just willing for the most part to let others use photos for whatever value they see- nothing, attribution, thanks, a music disc, and yes, even cold hard cash.

And there is comes again, that ironic trap of limiting your practice of open licensing to the minimum terms of the license- why not go beyond? If you are creating commercial work, and have budget, I think you should support creators even if a license does not say you have to.

It’s a lot more to being part of a gratuitous ecosystem of a commons than just Choo-Chooing a license.

Featured Image: Created with the imgflip Jeopardy Clue Card meme generator (really just a blur background), fidding with text settings to make it Jeopardy like. I guess I get to put a license on it, which one should I choose? Hah! Make it Creative Commons BY-SN Attribution with Snark ;-) 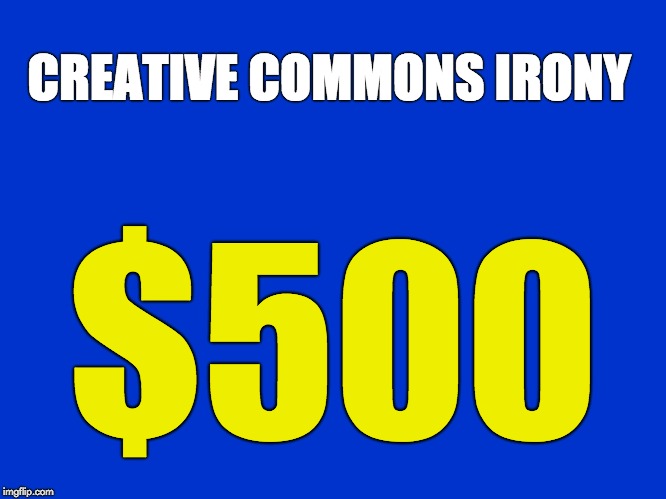