Thanks to a del.icio.us for:cogdog tag from Scott Leslie, I took a quick peak at the Levelator, a free tool offered from GigaVox Media. It’s a tool developed and applied by the pros at ITConversations, designed to adjust audio levels common in interview situations where one person’s audio levels are much higher or lower than the other:

Do you believe in magic? You will after using The Levelator to enhance your podcast. And you’ll be amazed that it’s free (for non-commercial use).

… It’s software that runs on Windows or OS X (universal binary) that adjusts the audio levels within your podcast or other audio file for variations from one speaker to the next, for example. It’s not a compressor, normalizer or limiter although it contains all three. It’s much more than those tools, and it’s much simpler to use. The UI is dirt-simple: Drag-and-drop any WAV or AIFF file onto The Leveler’s application window, and a few moments later you’ll find a new version which just sounds better.

Have you ever recorded an interview in which you and your guest ended up at different volumes? How about a panel discussion where some people were close to microphones and others were not? These are the problems the post-production engineers of Team ITC solve every day, and it used to sometimes take them hours of painstaking work with expensive and complex tools like SoundTrack Pro, Audacity, Sound Forge or Audition to solve them. Now it takes mere seconds. Seriously. The Levelator is unlike any other audio tool you’ve ever seen, heard or used. It’s magic. And it’s free.

And its true. I just gave it a quick test today and it was a gem. Here was the original Audacity waveforms for a session I recorded from our Second Life events (we use a teleconference bridge that streams speakers into SL; I use WireTap Pro to record the output received) where the introducing speaker had much lower levels than the speaker: 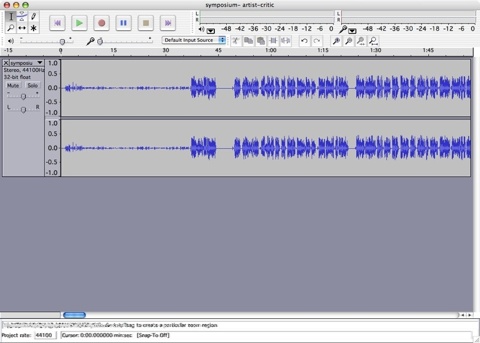 Typically, I might try normalizing which sometimes helps, but can bring up the lows too much, or worse, when you go in, select the low segments, apply amplify effect to each segment (or use a negative value on the forms that are too high). It is a PITA.

So I gave the Levalator a try.

it is a Java application that runs as a desktop application. It does as it says, presents a small window with a place to drop in a WAV or AIFF file (I am thinking it does not work with mp3).

This is not a problem, since the current version of Audacity for INtel Macs works as expected for editing, but it cannot export to MP3– it never recognizes the LameLib, and I have looked high and low for one that it will see. So my current process is to export my edited Audacity content to AIFF, drop it in iTunes, and use iTunes to convert to MP3– it seems to do a great job at that.

Besides, my audio guru says to always record, edit and save in uncompressed formats,

So I dropped my uneven levels to the Levelator, it processed it into a new file, and see the difference: 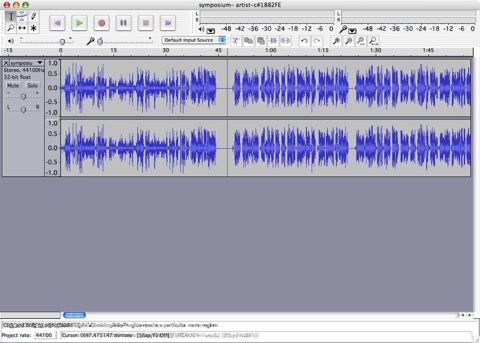 I am liking the Levelator