Mmmmm, another mutated strand of 5 things meme got batted my way from Alisa. I’ve got a lukewarm thing about such things. Over the years I have never forwarded those email things which warned an anvil would drop from the sky on this coyote if I failed to forward. Well, maybe it did.

So her rules are:

Okay, so I’ll start by saying that I had to change the rules. I just had to blaze a new path. Do things my way or the highway. (Insert your own ClichÃ© here)

I’ll try it your way, @soul4real! though it will reveal what a literary noob I am as Go Dog Go and CDB barely clock above 20 pages 😉 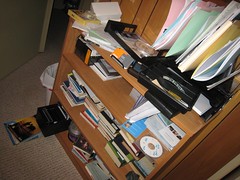 Since my office is chaos, it was easy to pluck three books from the random stacks. Let’s see if I can count sentences….

rummaging and counting sentences…. Ah, I like this one!

After a long silence he yawned, then said, “We’re using another shadowless thing.”

The only clue is the story takes place in the outdoors of Oregon.

One not used was O’Henry’s Short Stories (hah, I paid 10 cents for it in a thrift store; on Amazon it is 14 cents!) – the sentences landing there almost sounded like a geology book.

The other not used was Edward Abbey’s Brave Cowboy which I would have easily taken since he is one of my favorite authors (my copy of Desert Solitaire is in shreds), but the first sentence was one of those free flowing like a desert wash in flash flood ones- literally a paragraph.

Now the hard part- who do I want to inflict this upon? Should I pass the meme on? Will people just groan and mutter foul words about me when they get tagged? Oh well. I’ll pick some from my Google reader with no real logic of choice.

I guess there was a theme to my selection, they are all from people who blog from the west coast of their continents.

I have done the dirty deed.