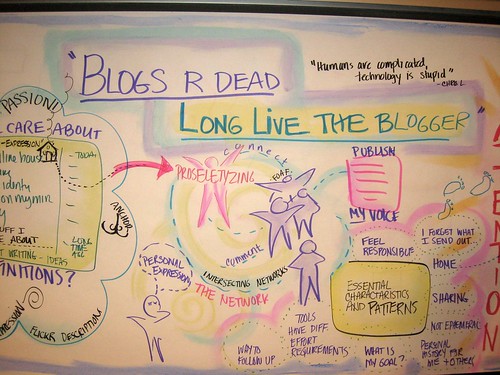 Are Blogs Are Dead my photo of Nancy White’s graphic facilitation at Northern Voice 2008 (do I have to attribute by own photo? why not?)

Lacking no editorial oversight beyond themselves and opinions of their 2 readers, one thing a blogger can do is change their mind. And back again. Last week I asserted, that despite some valley wag’s wired opinion, blogging was not dead.

Actually I don’t change one bit of my barking at the Wired puff piece.

And more recently Nick Carr asked Who killed the blogosphere?

Blogging seems to have entered its midlife crisis, with much existential gnashing-of-teeth about the state and fate of a literary form that once seemed new and fresh and now seems familiar and tired. And there’s good reason for the teeth-gnashing. While there continue to be many blogs, including a lot of very good ones, it seems to me that one would be hard pressed to make the case that there’s still a “blogosphere.” That vast, free-wheeling, and surprisingly intimate forum where individual writers shared their observations, thoughts, and arguments outside the bounds of the traditional media is gone.

Carr pulls out the tombstone engraving in Technorati’s latest “State of the Blogosphere” report where they report that while tracking 133 million blogs since 2002, only 7.4 million have posted in the last 120 days (meanwhile there have been about 100 billion tweets and 3 trillion Facebook status updates in the same time period- okay, I MADE THAT UP THAT LAST BIT- if you quote that, do so at your own peril).

Like the Wired article, Carr tips the focus towards the head of the long tail, the individual blogger who can “significantly impact mainstream media” or as a rather active commenter puts it:

And this still strikes me as an arbitrary, artificial distinction. It is still a small number of bloggers who reach, and maybe not much more percentage wise, who aspire to crack the Technorati 100. On behalf of the millions out there alive and blogging on the long tail, “WE DONT WRITE TO GET GOOGLE RANK”. We write because we have something to say, not that we want a massive audience. It disses all the ideas of Here Comes Everybody since all that count are Everybody in the Technorati Top 100. 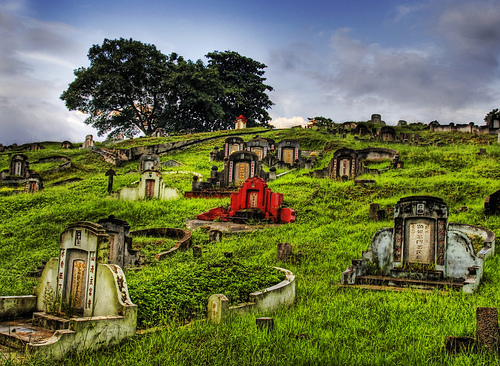 Ahem, the previous paragraphs started out as a two sentence introduction to what I was really going to write about, after all this time, we still waffle on exactly what is a blog. And I like that it is a messy definition, because there are interesting things that happen in the spaces of uncertainty.

I was reading a story on the New York Times site on Google Signs a Deal to e-Publish Out-of-Print Books (Hey do you remember when you could never link to a NYT article? or even see it without a login? Hurray for the passing of those closed garden days). In highlighting the text I was using for my delicious tag, I noticed the question mark hovering. And then I remembered the cool feature of the NYT site- any highlighted text can be looked up in a dictionary- so I took a stab at the word “blog”:

I do like that the results contain definitions from multiple sources, saying (I hope) that there are not absolute Commandment like definitions, but ones we have to sort through. Then it gets interesting…

short for “Weblog,” a diarylike Web site, usually containing the personal thoughts of the site’s owner as well as links to other sites of interest.

The old blogs are online diaries approach. Yep, blogs are teen angst diaries and ramblings of thimble collectors. This is so narrow and old, I cannot my gag reflex.

The American Heritage Dictionary definition uses the old circular recursion method. A blog is either a noun:

To write entries in, add material to, or maintain a weblog.

Wow is that helpful. Under the listing or Blogger, one gets a little closer:

A website that displays in chronological order the postings by one or more individuals and usually has links to comments on specific postings.

But again, that feels rather limited as well.

But hurray for the Columbia Encyclopedia, which provides better breadth and context:

blog, short for web log, an online, regularly updated journal or newsletter that is readily accessible to the general public by virtue of being posted on a website. Blogs typically report and comment on topics of interest to the author, and are usually written and posted using software specifically designed to facilitate blogging; they include hyperlinks to other website and, often, photos, video clips, and the like. The most recent entry by the blogger is posted at the beginning of the blog, with earlier entries following in reverse chronological order; comments and other responses to the blog by readers are often posted after each entry.

Although some bloggers have (or have achieved) prominence and expertise that makes them as influential in politics and other areas as established journalists, reviewers, and critics (some of which maintain blogs themselves), many bloggers reach relatively few readers and discuss matters of largely personal interest. Blogs are also used by politicians, businesses, and others to keep voters, customers, and the like informed on matters of common interest; they can function as a significant alternative to television, newspapers, and other mainstream media, especially in nations where the media are controlled or censored by the government. Bloggers have at times broken important news stories or marshalled public opinion on a matter of public interest.

Online journals first appeared in the early 1990s. The development in the late 1990s of software that made updating an online journal easier and the subsequent rise of websites that specialized in hosting blogs spurred the rapid growth of blogging in the first years of the 21st cent., and by the mid-2000s there were millions of blogs on the Internet.

Now this was more an exercise in looking at the differences in definitions than hoping for a “correct” one. And I accept that the forms of expression or personal publishing that came primary from weblogs 4 years ago, now is dispersed into other places. Quick ideas, conversations play out haphazardly in twitter. I consider the way I use flickr as blogging, because it chronicles what I am doing in visual form, and I take the time to write captions for context. If I was into a lot of video, my expression might be played out in YouTube, blip.tv. vimeo, et al. Tagging sites in delicious or diigo becomes the sort of link logging that was prevalent in the early days.

But where do the reflective thoughts play out? Where do we hash ideas out on the open? And more importantly, with all this dispersed activity on sites that may or may not persist in the long run, where is hub that is us?

And that is why I blog, to have my own personalized space to do whatever I feel like. Come tomorrow, this site could be all about fish recipes or embroidery or history of tin soldiers. But I am my own archive, and to me that is important. And more so, writing, writing, writing, helps you think, process, develop. Twitter is fun but it is the candy of the web and I want the full course meal.

That said, it saddens my to look to my RSS reader and see so few updates from the sites I used to get my regular fixes. I can accept that people express them selves in other venues, but I miss the good, powerful, funny, poetic, silly, serious, quick, in depth, personal writing so f people I respect or respectfully disagree with.

And I guess its okay to repeat oneself in different words as last year I implored people to Viva La Blog.

Keep the flames of blogging (defined as posting to weblog??) alive. Well, at least I will be one flickering and flickring) candle in the wind.