One dog tired blog trend here is kicking the cat about whether “blogging is dead”. After last week’s 2009 NMC Summer Conference, I have a resurgent optimism for the old long form (that is greater than 140 characters). 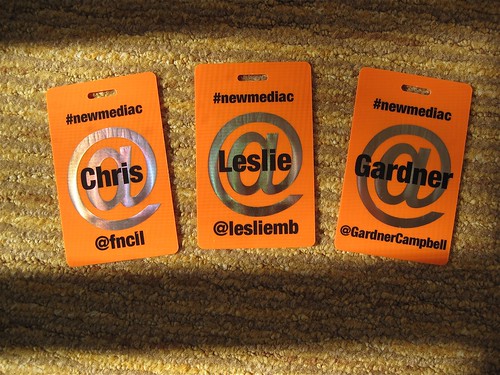 After our 2008 conference at Princeton, I was interested in finding a more coherent way of archiving or capturing the synopsis of the conference sessions- my dream would haveing at least one blogger doing it per session, but as a trial run this time, I decided to opt for inviting three “dedicated” bloggers to cover the plenary sessions (keynotes and the NMC Five Minutes of Fame).

The draw would be a front row seat with electricity and a hard wire ethernet- if you are experiencing most conferences these days, you know that the norm (especially in hotel venues) is crappy wireless and about 3 public outlets per auditorium. It seemed like an okay carrot. I also tossed in a TweetUp Badge (woohoo, big spender).

We developed a rigorous, peer reviewed process for selecting our Conference Bloggers– I looked at the registration list and picked three people I liked and respected–

I did not give them much guidance or rules- I was not asking for rah rah and I chose them because they are critical people who are not afraid to write against the flow. I emailed them:

If you are interested, just let me know. It’s not an expectation that you blog lavish praise for the sessions (we expect them to be great enough to speak for themselves); we just want to increase the amount of social media sharing of the event activities, and having some regular blogging is a piece of that strategy.

I did not expect them to be scribes, but they all managed to provide an amazing amount of recording of the speakers, and much more with prolific linking and embedded photos. And they were tweeting. I would guess they were all worn out at the end of the sessions. 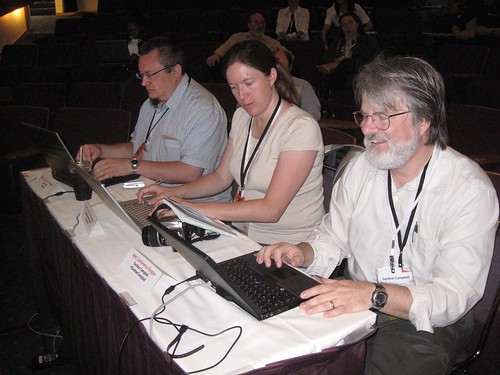 But my oh my, I am still completely bowled over at hoe much they added to the experience by doing more than just summarizing.

I expected both praise and criticism on the writeups for Kathy Sierra’s opening keynote on Creating Passionate Learners:

There is an amazing comment thread, a little heated at points, following Chris’s post on More on Creating Passionate Users… with Kathy herself chiming in:

Really, Chris and Jim, if you’re going to insist on being all *thoughtful* in your criticism, the internet might implode. Feels like I’ve slipped into a parallel universe where people make honest critiques, and actually care that the person they’re criticizing understands their perspective (and that it’s not personal). Weird.

So”¦ thank-you for giving me new things to consider, and helping me strengthen the things I care about.

My gosh it feels like the good old blog days of 2005! Long rambling posts, back and forth darting comments, and look! Actual compound sentences not bounded by tweet-length mindsets.

This continued in the posts about Friday;s keynote by Marco Torres:

What I really liked is that our bloggers played off of each other’s, interconnecting the posts even more.

I did not ask them to be scribes, but look at the incredible detail tracked on the Five Minutes of Fame sessioon (10 mini presentations in an hour) and the Centers of Excellence Awards:

But the real gem was the coverage by Chris and Gardner (Leslie had to leave early for another commitment) for the closing tribute session to Doug Engelbart, where he was presented the NMC Fellows award. 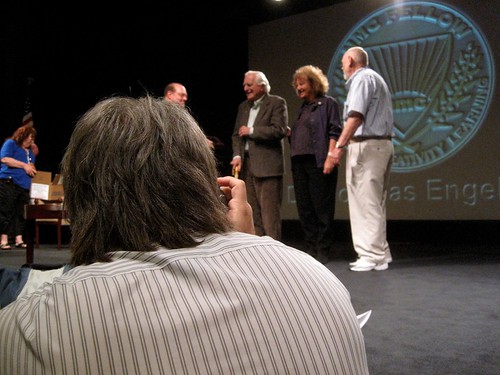 I knew how much this moment meant to Gardner- to call Engelbart a “hero” for him is a massive understatement. I glanced over a few times at Dr Glu during the session – instead of scrambling to type at the keyboard, he was taking it all in with what I guess was a tsunami of emotion. 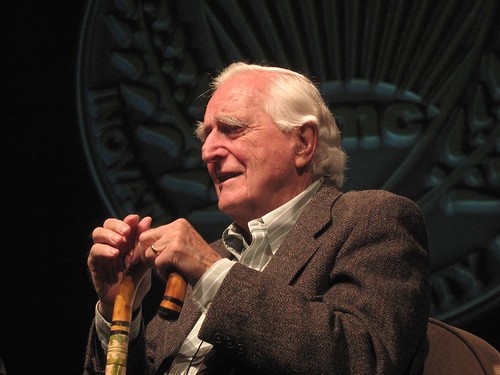 I cannot tell you my likly three blog readers (including Mom, hi!) what an epic post Gardner created in NMC 2009 Closing Plenary: Dreams About How The World Could Be— seriously, this is easily one of the best blog posts I have ever read.

Several times Doug covers his face in genuine humility. Can he be the person they’re describing? Certainly he did not do his work alone. But of all the great seers and doers of the nascent information age, Doug’s achievement is the most singular, the most to be driven by a single imagination. And yet his imagination was never the point. Always, the goal was to enable us to identify, harness, and raise our collective IQ. The idea was to augment human intellects one by one, but by means of a fine tracing of mental and spiritual connections from which would emerge a true “capability infrastructure” to prepare us for the dangers, questions, and opportunities we would encounter as civilization continues to develop.

Doug thought at scale. He understood that a car is not simply a faster tricycle. He had faith that an augmented intellect, joined to millions of other augmented intellects, could clarify individual thought even as it empowered vast new modes of thinking, new modes of complex understanding that could grasp intricately meaningful symbols as quickly and comprehensively as we can recognize a loved one’s face. For Doug, computers are the tools we have invented in our quest for a new language, even a meta-language. A manner of speaking that can move us through the enmiring complexities of our shared lives and dreams, and thus help us to use those complex lives and dreams wisely instead of being their puppets or victims.

My oh my- I would describe this is poetry.

And a big thanks goes to my three colleagues for demonstrating to me, at least for this moment, that the power of the long blog post still stands up.

And they did all this for a good seat and an orange twitter tag?

I don’t think so.

Flip down the tweetdeck and blog something today- posts like these stand tests of time.