In two days will be lifting off from Phoenix towards Honolulu for the 2009 ED-MEDIA conference which means I have 48 hours of presentation prep (actually more since I don’t present til Wednesday). I am doing another spin of 50+ Web 2.0 Ways to Tell a Story again using hand coded RSS and CoolIris to run the show.

I hear from folks who want easier ways to run presos in CoolIris (if you missed that boat, get the cool Firefox add on)- and there are more options now, including running it from a set of photos on your desktop, and likely the easiest, IMHO, is to create a flickr set and view that in CoolIris.

A recent tweak I found, which adds zero to the presentation itself, but I could not resist, is the new ability to add your own custom logo to the CoolIris menu bar: 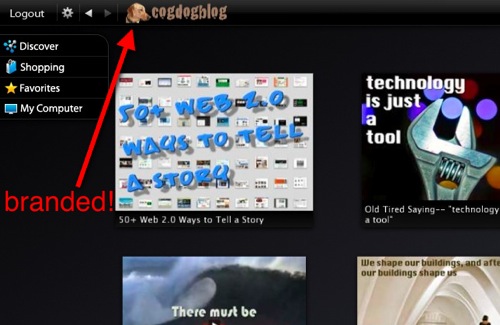 This is just a PNG file (useful because you can use PNG transparency to avoid Logo in a Box) I have stored in an images directory on the root level of my web site– it’s just another line in your media.rss file right after the first <channel> tag. The image should be no higher than 26 pixels so it fits in the bar

You typically would be using a full URL, but this is because of another presentation “trick” I do with CoolIris- I do not run the presentation from the web (oh the joys of conference hotel internet) but from a web server running locally on my laptop- so my desktop URL is http://www.cogdogblog.loc/…. and I use relative links to keep everything in tact.

So it’s not really crucial, but just a Neat Thing to Do.

A current frustration with CoolIris is that either the newer version of it or Flash v10 has broken the ability to play FLV videos inside CoolIris- I can view videos fine from YouTube, but nothing works as it did a month ago for my own spun shows. Dean Shareski did send a link from the developers site acknowledging this (and that link is now gone), the developer forums have others asking about this, I even got a tweet response from CoolIris where they acted surprised— but the point is the method that worked in May 2009 to embed FLV inside custom mediaRSS now fails.

One approach would be to uninstall flash 10 and roll back to 9. What a PITA. For now, I am just changing my strategy, and not putting the FLVs in my mediaRSS file, but building an image representational screen, and using the link option to jump out to my own web page that has the video embedded. Not as elegant but you do what you can….

So as a sneak preview, it was just a few days ago that I realized I had missed a major cultural reference that fit in well for my presentation in Hawaii:

The real reason I like using CoolIris, beyond the “wow” effect, is that ability to jump out to URLs in the middle of a preso (simply by assigning the URL in the <link>...</link> tag) and to easily jump back to where you were before. I may adjust this in the live presentation, because there is a wait period while the URL loads in a new tab- for just my presentation version, I plan to pre-load all my externals in tabs, and just jump out of CoolIris to go right to the site. It can be awkward standing on stage waiting for the site to load.