I pulled out all the Hawaii in yer eye themes for the latest incarnation of my dog and dog show, presenting 50+ Web 2.0 Ways to Tell a Story for the EDMEDIA 2009 conference (all links mentioned in the show are just a scroll away from that link) 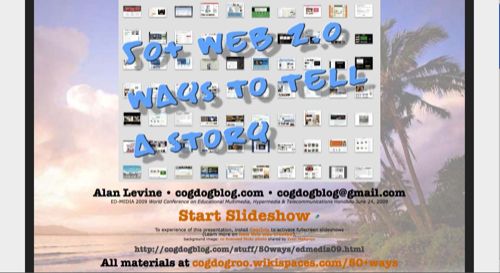 It went fine, I had fun, people laughed at the Blabberize Alpaca. There is an audio recording coming from EDMEDIA, which is going to be full of me popping my p’s a bit loudly. It was a few days before that I realized I was missing a key cultural reference: 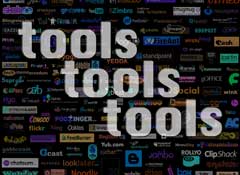 I’m really ready to hang it up and retire the shtick. This time I tried to take a tack of emphasizing some things I suggested were more important than the tools, some things I called “the craft” and aimed to hang them on some of the examples.

I did get the audience to join in the group story game where they had to contribute to the prompt:

Under a Full Moon, Last Night I Saw The Strangest Thing Happen On Waikiki Beach

(as usual) it involved Elvis singing “Blue Hawaii” and then he was dancing with a shark… someone has to wrap that one up.

And also as usualy lots of people want t know what software the presentation was done in.

and it is! It’s just images, some RSS, and the CoolIris plugin– all building on what I outlined in CoolIris as a Presentation tool. It’s a bit easier now to run your own image slide shows, even from your desktop, and Scott Leslie keeps pounding at other ways to create shows– but to me, the most powerful method is rolling your own RSS feeds since you can then define the web link for each slide. That is the reason I use CoolIris as it is nearly ideal for doing presentations about web sites because of the way it moves back and forth from presentation to web and back.

A few new wrinkles I tossed in this time:

A few other notes on my mad methods- I do everything to avoid the inevitable Sucky Hotel Internet. So I run my presentation in a web browser, but running locally from Apache running on my MacBookPro. That makes it run a little faster. IN addition, because of the awkward pauses while waiting for web sites to load– all of the external sites I planned to use I had pre-loaded as tabs in my browser, so all I needed to do was to minimize the CoolIris interface, and flip to the right tab.

So that was 50+ Web 2.0 Ways to Tell a Story, Hawaiian Style (pineapple and Canadian bacon??).