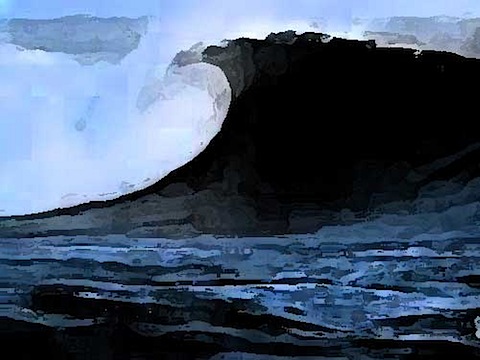 A few weeks ago twitter and some blogs were all a’ gushing about the demo of Google Wave like it was the new Shimmer, maybe even more than a dessert and a floor wax. I tweeted some snark about the hype — a bit foolishly since I had not seen the demo. I failed to heed my own warnings of judging a technology from the outside (well, I cannot help but be from outside, since all I have to go on is an 80 minute demo).

Until today on the flight to Hawaii, when I watched the whole demo on my iPhone. I’m surprised the plane held steady with the number of times my jaw dropped or I yelled, “wow”.

So I cannot do much except say wow– but–but–but if the wave does break (in the positive surfer sense), this could be a huge game changer.

Not only does it change email and communication as Rasmussen proposes in the beginning (“what if we were to invent email today?”) — it could be the end of the static web as we know it. Now of course, with web 2.0 we think it is really not static, but the web on wave looks a whole lot different than what we have now- this very blog post becomes a conversation that is always being updated, edited.

There is also this sense of information, communication becoming free of the technology boxes we have them now- so the same content can be modified, edited, discussed via a browser, phone, blog, wave client, some remote programmed bot..

It could change the sense of what we think of as documents, as they become distributed yet connected– the piece about people working simultaneously yet in a chained publish model (pieces of one wave are updated causing instant propagate changes where-ever that web is used.

Is Google Wave the manifestation of those long ago (for me dead) dreams of reusable learning objects– but with much more?

Another piece that just jazzed me was both presenters manipulating and marking up a Google Map together. This has been one missing piece of Google Maps / Earth- the social layer that we see in virtual worlds. With wave, we can be co-exploring (or heck field trips) in maps, maybe Earth?

Things maybe to be added or I missed include:

So I have sipped the wavy cool-aid, and it is now factoring into plans for a major new NMC collaboration site I will be charged with designing this year.

While this is all exciting for the technogeek in me, the bigger question is — is it too much a cognitive leap for people to jump form their inbox? Is it too complex for people to grok? What will be the big feaure, app that will make people drop the fears to try hopping on a surf board and get on a real wave?

I am paddling out there to see….