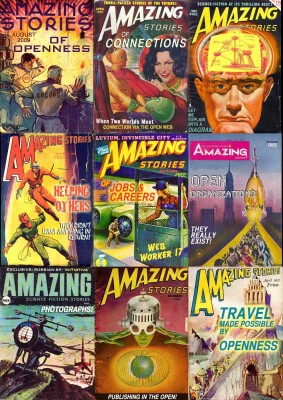 My session yesterday at the Open Education Conference was absolutely the most fun thing I have put together for a conference. it was so fun I did not wait til the night before to finish it. The images above were totally not necessary, but I found myself up at 1:30am mocking up old covers from a collection of scans of the original Amazing Stories magazines (for which, I openly admit, I may not have permission to do).

So if you want to watch the presentation, you can do so via the UStream recordingbut to be honest, it is better explored via the Amazing Stories site— the CoolIris version of the presentation (more or less a glossy way to browse the stories), or the individual stories as launchable videos, or the URLs relevant to the stories, or even a flash player to play them all sequentially at http://cogdogblog.com/stuff/opened09/. 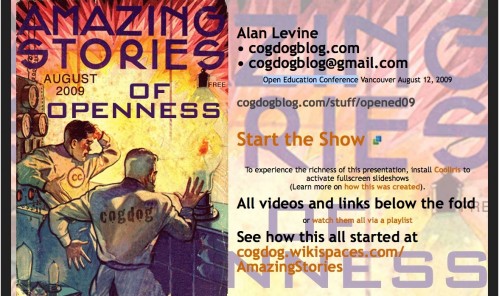 I wanted to come to the Open Education Conference
mainly for the caliber of other people participating, and is it seemed, I was able to meet a long ist of colleagues whom for up to now, I have only known online. Lots of people have this experience, and maybe we lose sight of how amazing this piece is that our online collaboration spirit is enhanced, amplified by the times we get to meet in person.

But to be honest, I dont have a lot to do with open content or open courseware.

So I rolled back to think just about the value of open- of sharing things online, and my past stories of funny, weird, and lovely serendipitous things that have come my way because of content I’ve put online- hence the idea to get other people to share their own stories.

I’ve long been interested, or more likely baffled, by why it seems so many in education are reluctant to share. This goes back so long in my career I cannot remember, and was heightened in the days I was working on a system to make it so easy to share that it was nearly fun.

And now I wonder why something so basic something that seems innate in kids in their play with other peer kids– is somehow schooled out of us in passage through the educational system. And thus I end up with my gut sense of what most kids know- when we share it feeds into the system that ultimately ends up with others others back to us.

It seemed as well when I talked to the people who contributed this stories that it does not take much of a response (a comment, and email) to generate the feedback loop. We all crave connection and attention and approval, and filling the world with more of the above towards others cannot but help.

It’s my hope that these stories just inspire a sense of, “I want to be part of this” or “that’s pretty easy” or whatever it is that makes people realize what I have known for long- when you share your stuff in the open, good things come back in return. That is not the reason to be sharing, but it is an outcome

At the same time, I have to avoid creating the expectation that if you just hang your photos in flickr or writer blog posts, that the riches will shower down on you. It is not a guarantee, and it also involves the other important aspects of giving feedback and response in other people’s online space.

The best thing to say about this came from my conversations with Clay Burell. I asked him about not wanting to put out this hope, that just by sharing content, you can’t count on getting some unexpected surprises. He sharply noticed then the only guarantee is

If you don’t share.. then you won’t get any unexpected surprises.

Was “Amazing” Too Big?

I issued a call for stories through several channels, and am clinging on to looking at that half full glass of the people who did share their stories, but at the same time, I was thinking I might get inundated with so many of these.

Perhaps “Aamzing” suggested to people that it had to be Huge, Epic, World Changing things I was looking for– in fact. I sought the opposite, the little, the small, the ones that just made us smile in amazement. Maybe it should have been “Amazing Little Stories of Openness”.

But I did get a Gardner Campbellian bag of gold.

The Method of Getting Stories

I hatched this idea in May or June, and set out getting responses by blogging about it, setting up a WikiSpaces site to host a call, groveling on twitter, etc.

What worked well was setting up a Google Form to have people share their contact info, the gist of the story, a preferred method of response (email, Skype, etc).

It was a few weeks later that I got the idea that posting a video call in YouTube would be effective, since people could just respond in a video reply.

I absolutely wanted this to be video, and for the few people who just sent the story details or did not respond to my emails, sorry I did not get yours in the mix.

The videos were acquired in multiple ways:

I went very simple on the editing, doing it all in a 3 year old version of iMovie HD. I sought out screen shots and photos that were part of the stories so that I could as on screen overlays (the voice continues in the audio channel).

I do this typically by separating the audio and video tracks, so I can insert a still to take the place of video, but often small bits of offset end up with the video and audio being out of sync

I have a simple approach for doing this, which is not always easy in iMovie since you only have one video content track (my next project is complex enough to warrant cracking open Final Cut Pro).

After importing my entire clip into iMovie, I trim and junk from the start and end, and if there are distinct breaks (e.g. if I have multiple stories in a single track) I use the Spit Video at Playhead option to break the clip into parts.

I first locate the point in the timeline IO want to insert my image, and note the time at this in point, in this example, 2:20:04 (it helps to be zoomed way in on the timeline so you can fine tune your cursor placement). I then do a command T or Edit – Split Video at Playhead to make a first cut.

I then move the playhead to an even number seconds ahead, usually I did 5 second inserts, but sometimes 3 or 4 seconds would do, and do another Split Movie at Playhead. If you click the timeline between these two points, you have the segment of video to replace.

Now with this 5 second segment selected, what I do is go to Advanced-Extract Audio, which then puts the audio for this segment only into the audio track. 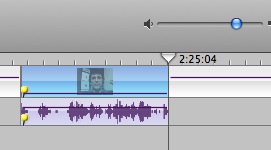 Now I click the video track 5 second segment again, and delete that video clip. I can drop in the still image I want to appear in the 5 second space.

By having just the replaced segment’s audio on the sund track, I can be very precise in making sure my inserted still image lines up at the exact in/out points.

From here, I can go into the Media – Photos-Show Photos tools to zoom the still, or apply Ken Burns effects.

It’s easy to make people nauseous with a lot of big zooms, but done in doses, it works well. My approaches are:

I saved all my clips as MPEG 4, Exporting with the iMovie Expert Settings, using: 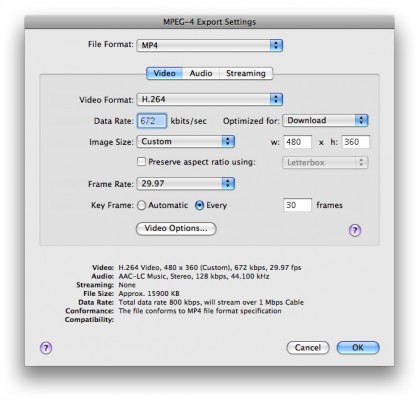 I then converetd this to FLV for use in my web site.

Assembling into the Web Site

I tossed the full pile of media into the final web site at http://cogdogblog.com/stuff/opened09/.

Firstly, I set my presentation up to play in CoolIris… not to be explained here, but I have outlined it elsewhere. It’s a matter of creating a directory of images (U usually do at least 800×600 JPEGs for the full images, and 240×180 JPEGs for the thumbnail images. And yes, I roll the MediaRSS file by hand.

I am super wary of bad internet connections at conferences, so I run the entire show fro my MacBookPro running a local copy of the Apache web server, This minimizes the load time of media and bails you if thr local hotel wireless sucks (which it usually does).

I had to do something different for this presentation, since I dod not have time or desire to play all the stories as video. I created a second copy of the site, so that this one uses a mediaRSS file that pulls videos form a second directory, where I had taken each story and made a 1-2 minute excerpt. In the presentation, I set up the videos in my telling about it, and then could play the shorter clip.

I found an annoying glitch in my process on the plane flight to Vancouver– the new way they load CoolIris in a browser, it runs my media RSS feed through a URL at www.cooliris.com so I cannot run the show totally offline. I’m guessing they are gathering data on the feeds used, but I wish it would fail gracefully if there is no internet just to run locally like it always did before. There is no technical reason it has to run a URL through a live web site.

In addition to the CoolIris viwq of the stories, I added a long scrolling list allowing links to pull up the stories individually, and to provide web links to sites the people referenced in their stories.

I got fancier again, using some HTML/CSS/Javascript Lightbox- the method where a link opens media in a translucent layer over the page: 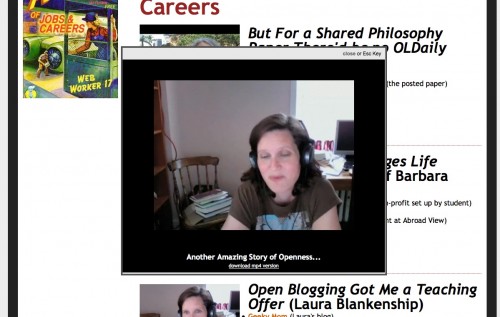 so this way, I can keep the experience in the same page. I’ve been using this a lot in my custom sites, and am wanting to do more writeups on how this can be effective.

Here, I made it a PHO script that opens s I can pass a file name for the FLV movie to load (using the Longtail Flash Player) as well as a download link to the same as an MP4.

The last bi I added was another link that can play all of the videos together in a single player- this uses the same Flash player, but I can pass it a playlist in XML format, so that all of the videos can be viewed in one place (using the menu at the bottom, or the track buttons on the player to advance, or just sitting back and watching).

So that’s pretty much the behind the scenes look at this presentation, which was one I just loved putting together.

And if you did not get your story in the mix… well, I am done putting them together, but you can always add them as a reply to my YouTube request.

Frankly, I know each of you has had some experience that is something that would not have happened if there was not this open space of sharing. I have dreams of seeing thousands of stories appearing, and of people dropping their fear, loathing, reluctance about sharing, and just share like mad, like crazy.

Go out and be open. A lot of people doing that is Amazing.