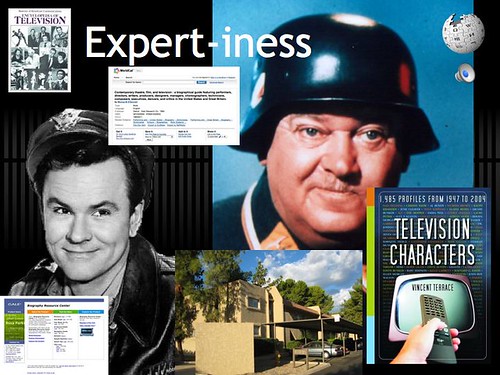 A few years ago I started some conference presentations with a sloppy attempt of a disclaimer, leaning on my own familiar TV metaphor of Sargent Schultz from Hogan’s Heroes and his classic yodel of “I Know Nothing!”. I was trying to deploy it in the sense of “I am not an expert” (Yes, I am a card carrying member of the Imposter Syndrome Club).

But Schultz’s method was one of being deliberately ignorant of what he observed, as some means of staying out of trouble.

I tried to use Schultz though, taking it down the path of what I learned when researching my facts on Hogan’s Heroes, weighing what I read about the character backgrounds on Wikipedia- I asked library experts among NMC members about what “trusted references” they would use to research the background of TV actors – these include reference books such as “Encyclopedia of Television” ($675) and “Television Characters” ($75) or subscription databases services such as the Gale Group (and I wandered down thr tangential lane of noting actor Robert Crane’s mysterious death in an apartment complex less than half a mile from where I lived then).

I was trying to ask about what the new notions of “expertise” were and if maybe “expertiness” in the Colbertian sense was sometimes enough. Or maybe it was a problem.

Yet I continue to see places where people continually market their expert skills, they spend each day showing the world what they know. I’ve alluded before (and will again, and will never reveal) that I subscribe to one particular blog, one which has 100 times as many readers and 1000 times as many twitter followers than me (therefore I am jealous), that almost regularly contains some of the most noxious self inflating writings I have ever come across.

Obviously, all those followers know something I don’t. But reading that keeps me grounded.

Or today, someone twitter me a link to 33 Signals Of An Alpha Social Media Evangelist. Some of them are things that many people do who maybe are not alpha leaders / A-Listers per se:

1. They are informers, usually using tools such as Twitter to spread links that point to information-rich articles.

2. They are giving away valuable things for free, such as how-to articles, video tutorials, etc.

3. They are usually early adopters, with things such as new tech gadgets or trendy social network sites.

But then I wonder at:

5. They usually have a lot of fans for their own Facebook pages.

18. Their profiles usually can be found on Wikipedia or their own Google Profiles.

I was unsure if the author was 100% serious or tongue in cheek.

In particular, having a huge number of twitter followers is a serious false positive IMHO, and in this month’s Wired magazine, Clive Thompson nailed it with “in Praise of Online Obscurity”:

I’ve heard this story again and again from those who’ve risen into the lower ranks of microfame. At a few hundred or a few thousand followers, they’re having fun “” but any bigger and it falls apart. Social media stops being social. It’s no longer a bantering process of thinking and living out loud. It becomes old-fashioned broadcasting.

The lesson? There’s value in obscurity.

After all, the world’s bravest and most important ideas are often forged away from the spotlight “” in small, obscure groups of people who are passionately interested in a subject and like arguing about it. They’re willing to experiment with risky or dumb concepts because they’re among intimates. (It was, after all, small groups of marginal weirdos that brought us the computer, democracy, and the novel.)

And that is where I want to be, so here I wave my own flag of ignorance– 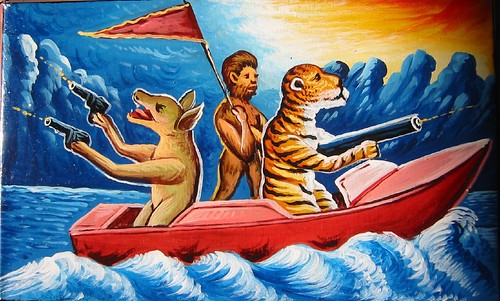 Rather than boasting what I know, or all the 1-2-3 steps You Should Do To Be As Successful as Me (plus the Link to My Book You Should Tell Your Friends About, I am going to tell you how little I really know.

There’s a lot more that I Don’t Know, but I am getting tired of writing — it would take me the rest of my life.

So there. I don’t “know” a lot of things– to me this is an opportunity, cause how dull would it be to be Such A Great Expert That Knows it All (and Charges You $25,000 to Bring it as a Workshop)? I’d hate such a burden. But that’s me down here happy in ignorant obscurity-ville. That just means I am jealous of the shiny people.

And I think the continued propping up of Pompous Self-Inflated Windbags as “experts to follow” is crappo deluxe.