Stephen Downes highlighted today one of those wonderful simple ideas that can go (and has gone) a long way. In An Idea That Keeps Growing Doug Peterson shows how his simple idea took off– to use online maps to create a walking tour of the place he grew up.

As Stephen suggested where he plotted his own tour of Metcalfe Ontario, this is a great simple activity one can do for some online storytelling- now with Google Street view, you can literally snap photos of your old neighborhood, and mix that with your memories, and shazam! Digital story.

It’s something most every person could do, assuming they have a childhood they don’t mind recalling.

But hee hee, it is not often one gets to say he did something way before Stephen, but (cough cough), I posted a memory map in flickr back in 2005 when a group started to collect similar photos 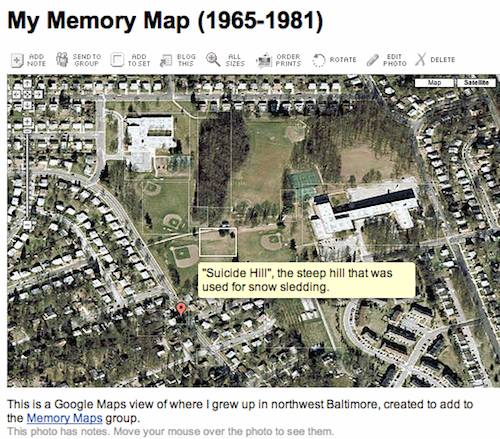 This was old school Google Maps- no street view to snap photos, so I used the Notes tool in flickr to annotate my map with bits of memories, sledding on Suicide Hill, the creepy corner that had been a Civil War slave cemetary, my old middle school, etc.

But its not about the platform or when someone did this; it’s about what opens when you post it online. In my case, I got a comment from Phil who is currently a student at my old school:

I go to Sudbrook. They are renovating the whole place…. I know exactly where your talking about. I will upload some pictures of the school now so you can see a difference (If they let me take some pictures). We have a new gym floor and new bleachers, air conditioning, new windows, new bathrooms, and new lights!! I have never heard of “Suicide Hill”.

And in a similar fashion, someone commented on Stephen’s map/story who grew up in the same town.

There is so much one can do with map based stories, especially with the ability to, in many places, even Strawberry Arizona, go into Street View mode.

For another twist, a few clicks back I noticed while exploring Street View in San Francisco (likely cause thats one of the few places one could see it), that often, the Google Camer Car would end up following another vehicle, so I had the idea to make up a movie following the path down Lombard Street… I see no reason why one could not use screen capture software, and make an audio narrated tour as you do a streetview walk through your old neighborhood (or even a new one).

Maps can add a whole new dimension or 3 to your stories.

But what is most interesting is the variety of ways people have managed to take Doug Peterson’s idea and create them in all kinds of tools.