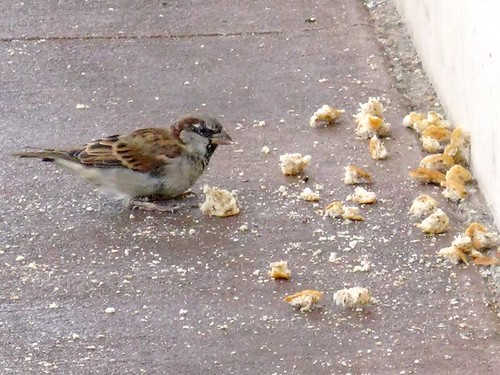 After taking my pot shots at twitter for the uselessness of their search (which remains worthless, heck I’d start questioning all kinds of things like trending topic numbers… who can audit that? who cares?) I took a look at few of the other ways to organize your twitter bread crumbs.

First up was Martin Hawksey’s slick TwitterPad plugin for WordPress. This does a regular call to the wobbly twitter search, and you can archive any kind of search you can do there- your own tweets, tweets with a certain hash tag, etc. The idea is your tweets get saved to your own wordpress site.

So I set up my own Dog Tweets page, which should, every 12 hours, copy my tweets from twitter and safely file them here. I’m not sure what happens as it grows- it does not seem to paginate, and I am wondering if the archives in Martin’s blogs are hand rolled. if anything, I have a new blog to keep my RSS feeds fresh.

As mentioned before, I also set up my person archive on twapper keeper – it looks like they update every 24 hours, I notice there you get an export option (nice) and the summarizr services from eduserv– from the latter you can see you I am replying most to (@dailyshoot gets one per day) 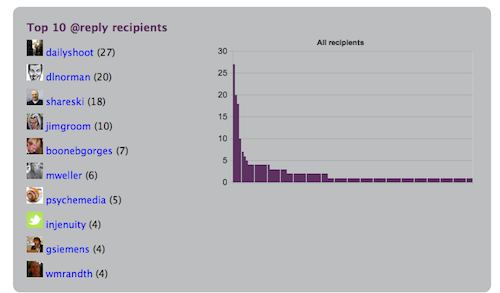 It also appears that 25% of my tweets have URLs. Not sure if that means anything. Twapper keeper also makes a map out of any tweets that had location data.

Next up is Twitter Times, an automated service that picks up the links, stories, and media that people you follow are tweeting. Now this is just plain powerful, and no mater where you stand on the PLN/PLE/GACK spectrum, this is a powerful way to leverage what people in your network are into. 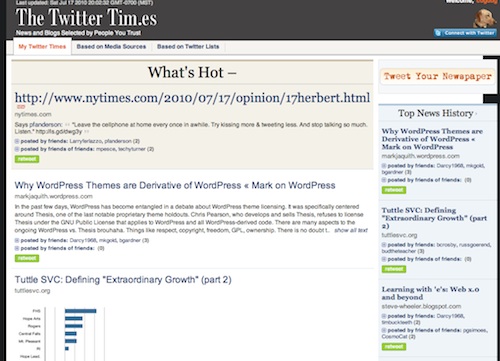 So instead of trying to pick the best lint out of your twitter stream, they try and do it for you, ranking urls tweeted by your friends and alos weighted from friends of your friends (and here we go down the path fo adding to your network, see the virtuous cycle or just the dog chasing its tail??).

But there is a new variant that is catchig my eye- paper.li which again does the “make a newspaper out fo my twitter stuff” but gives you different views- you can get one for just your account (here’s mine http://paper.li/cogdog): 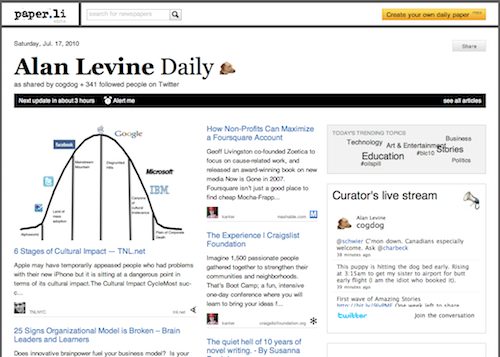 On this alone what paper.li does is- makes a tag cloud of your tags, but among the links people share that you follow on twitter, it separates out ones that are media (videos, slideshares) and even breaks them down into Newspaper sections like “Business”, “Arts and Entertainment”, “Politics”, “Education” — this seems very clever.

But paper.li lets you also set up “papers” based on other criteria- like a twitter list (now this is the first thing I have seen made useful out of lists) or out of hash tags.

Seriously slick. Can anything better say what the power is of picking people or organizations who are in your range of interest, and use tools like these to efficiently harvest? All that crap that you hear moaning “who has time to do twitter” — the value is not nearly as much in the talking as in the listening.

This notion of “listening in social media” is something I picked up recently from Beth Kanter during some consulting she did for an NMC workshop planning process. See her wiki site for a wealth of more on this notion. Through this I’ve learned and played a bit with Social Mention, a tool to track your mentions across social spaces.

So its more about making bird noises all day, its listening to the calls of other birds.

What bird crumbs are you eating?