Notes from the blog crypt.. This post has been lingering in the drafts area for a while; it reminds me of one of those mystery containers of Unidentified Food Substances in the back of me fridge. I keep thinking I had thrown it out, and every time I rummage around, I look at it and wonder, hmmm maybe there is still something here? 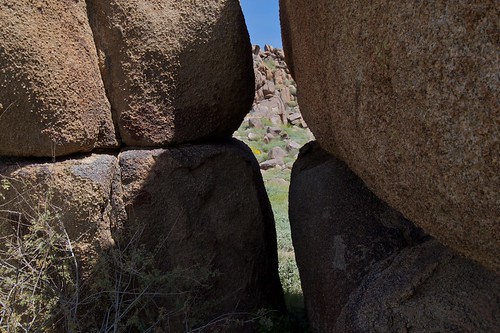 I have these two braided streams of thoughts I cannot untwist; these were to intended as separate posts but could not sort which one came first. And I am not really blogging this as much as dumping in an iPad at 30,000 feet over California. 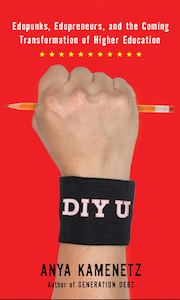 One strand is assembling a mixed jumble of thoughts after finishing Anya Kamenetz’s DIY U. I read it partly out of curiosity of what was mentioned of my colleagues/friends in print, partly as a group of others suggested a group reading/mashup of posts/tweets which seems to have dissipated (once again a lesson is, like a successful wiki project, you need a gardner and perhaps a driver to keep the drum beat going).

As a side note of economics I still don’t understand, the Kindle version was priced on Amazon at 18 cents cheaper than the paperback. I opted for the latter, which have marked up in highlighter, underlines, and indecipherable notes in the margin. As much as you will remind me what I already know- that I can annotate in Kindle, it does not feel natural. It is overhead. But that’s another post.

But back to the DIY U book.

I cannot sort out what the — I cannot recall the phrase Gardner Campbell uses in his seminar– the key phrase that gets to the heart of the message. Does the author wish to be part of the movement to revolutionize education? Does she have a stake? Or is she the semi detached journalist; get close to the subjects to extract an essence, distill it, and move on to some other topic next? Is it aimed to be a success at sales, so it is keyed to attract attention?

The answers don’t really matter, but I found myself reading in states of being ready to argue and criticize, and other times more quietly opened up to new ideas that I almost did not expect to get (the assumed value of a four year degree, the economics of pricing education, the “signaling hypothesis”, a range of interesting organization projects educating out of the mainstream model).

And really, when writing about a book, the tendency is to think you have to issue a final “thumbs up / thumbs down” which seems pointless in the longer view. I have to say as a result of reading the book, I have some new lost neurons swimming in a different direction, and who knows where they may go? I have to admit I came away with more than I expected, but like that jar in the fridge, there’s a certain wafting odor I cannot escape from.

I also struggled with the writing style- in the same paragraph, it wavered from obviously highly researched sources where every sentence was footnoted followed by a sentence of sweeping generalization that was just left hanging out there, e.g.

Community colleges fill in the gaps by taking all comers, yet the product they offer is generally acknowledged to be a substitute for the real thing.

WTF? Who generally acknowledges this assertion? Is it a typo for someone named “Generally”? Wither footnote?

And I am sure it is the magazine journalistic style, but the writing in DIY U just teases towards the powerful personal stories that Clay Shirky weaves into the chapters of Here Comes Everybody, but in DIY U we just get flimsy postcards of the stories, and they drop off the table in a forgotten heap. Probably a victim of editing? I don’t know. I don’t write books. But that seems a loss as we get half stories that bob around among a river of facts and footnotes.

What I did get out of DIY U is the awareness that I held the assumption (my own generally acknowledged) that the more schooling we get people to march through, the better of society will become, the human capital theory. We have created this culture where the main route of personal success is directed through a golden arch if higher education– when really there are a set if societal, environmental advantages available to a larger degree to people of certain social economic stature who get a better head start, like me. It’s not that an undergraduate degree gives you an earning advantage; the numbers indicate that it’s more a case that lacking the degree puts you in the group who’s incomes are declining, “That is, the non college penalty is rising, not the college reward” (p28).

I do struggle with what seems unsaid but is that the main purpose of becoming educated is focused on job, salary, income afterward. The author makes passing reference to the contrary, but moves quickly back to the the home stats of income as the outcome of education. Absolutely, to me making an income, getting paid for my skill is important, but was never a goal. I have trouble with the notion that the purpose of an education is measured by the salary levels achieved after. Then again, a dog has to eat.

The examples in the chapters on “Computer Science” and “Independent Study” are a healthy mix of ones I knew and many I did not; my dim memory of the Western Governor’s University were way off of the interesting approach described where teaching is separated from assessment, “Faculty members at WGU are not responsible for grading; that would be a conflict of interest.” It sounds like they have unbundled the traditional roles of the job of a teacher.

Taken as a whole, the examples of DIY in action seem isolated, interesting, fascinating, hope-raising exceptions to the rule, but also feel like minor ripples on the deep still water of our educational system. They feel like outliers than a movement or anything close to a “revolution”.

But let me get to the alluded to missing gap I find not just here, but even in the notion of open education as a whole (and something I deeply care about).

What is going to motivate the large swath of a society to become educated or to learn something in a self-directed fashion? It’s one thing to be facing a need that I need to to know first hand– how to fix a bike dÃ©railleur, how to stop a leaking toilet, how to bake a lemon meringue pie how to add a widget to a web page– these are all places DIY shines, when I know that I don’t know something and want to fill that gap. It is clear when I don;t know something I want to know. Lots of people do this.

But what is going to drive people to learn what they don’t think they need to learn? What they don’t know is worth learning? In a DIY world with people tooling up for a better job, are they going to DIY their way into poetry? French literature? Is the limits of education the things we need to know how to perform/get a job? That a bothersome underlying under toe in DIY U- that the purpose of education is to end up in a job. That feels…. lifeless.

Left to my own naive, immature interests as an undergraduate, without the general education requirements, I would never have been motivated to learn Art History, Philosophy, Photography.

Or try this as an exercise. Go down to your local mall, Walmart, grocery store, city park, a place where you see a wide swath of the general public, Take a look, and try to figure out how many of these folks are ready, equipped to DIY it. Yeah, it’s a judgement call and it teeters to the area of crass judgement.

So in DIY U, the author does make a valid argument, to me, that the notion of pushing more people through more four year degree programs wont really lift the boats–

A four-year college degree is stilla good investment for the individual who is academically prepared, has the external resources and internal fortitude to finish that degree. But the current official strategy of trying to cram more of our least-prepared young people into our most resource-deprived institutions, with the absence of any other components of a welfare state or investment i quality job creation, and hoping it makes America into a more boradly prosperous country is not likely going to work. (p29)

What I get, and accept is that people equipped with the factors to succeed in college will benefit most from it. College works for people who start with a head start on the factors that leads to success in college.

But we get to the end of this, to the resource guide, which is… resourceful, but as I think about all of the steps it takes, and the motivation of the people described as doing it, I am left wondering at this end of the spectrum, how many people really are ready and motivated to DIY it? It’s a lot to take on, not un-doable, but the mountain of motivation seems — epic huge. I cannot help but think a small number of people will even have some of the DIY moxie that Molly Crabapple shows (p 137).

The examples of open courses I have seen are… well about open education. People enter with their interest and motivations already packed.

Anya swings close to this on page 131:

Both learners and providers need to get comfortable with identifying meaningful objectives – and meeting them. For individuals, the true value of education has to be intrinsic, not extrinsic.

Just creating more DIY stuff for people who already have a DIY affinity is not going to deal with this intrinsic value creation.

So the gap I see is; just like Anya paints that the current college system favors those with a pre-disposition to succeed; what we have now in the prototype DIY U also seems to favor people with other pre-dispositions to do well in this different environment. I don’t see that tent being any larger than the traditionalist education one.

Of course it is extremely early in the game; on a comparable scale, DIY U is at the stage of the first protozoan species, so we are a long way from giraffes or butterflies or pterodactyls.

At the same time, all of the new magic gadgets (I agree with Will that it’s not easy), all of the new offerings from “eduprenuers” (I too share a disgust for that term), all of the hopes for revolutions — are all too focused at the leading edge, the people who already have a leg ahead in the space.

There is a huge gaping void we are not doing anything about in our dreams of self-directed open learning… what is going to motivate people to even be on this road? Not to mention to stay on it? What/who is going to support, buoy, guide, inspire the ordinary Joe/Jane/Juan/Julia/Jorge down the street? 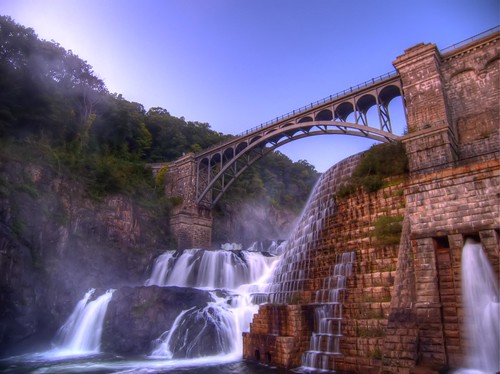 Are we dreaming of magical bridges? And what is in that jar?