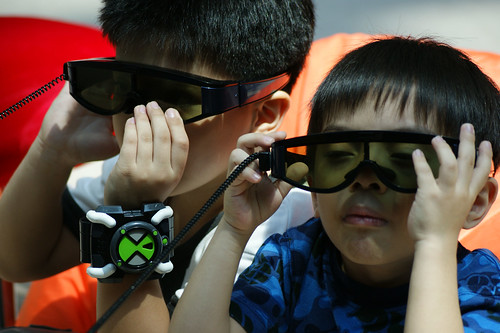 I barely watch anything on my home TV screen (I don’t get a signal nor any cable, so its for DVDs only), so I’m not quite up to speed on the latest technology for 3-D video but it is a technology we try and track for the NMC Horizon project.

About the 3D film I’ve seen in the theaters was Avatar (saw it twice) and have to admit the 3D added something that grew better as you noticed it less, it was not like the gratuitous flyouts of shovels and guns that marked the cheesier and older 3d movies I saw longer ago.

The current issue of Wired magazine (18.10) (I get the dead tree version in my mailbox, I am now a throwback) got my brain spinning a little bit simply from the Rants section. I cannot say why it got me thinking, but I find its better to play it out than figure it out.

There were comments to the past Will Ferrel cover issue on the future in a column, Does Every Film Need to be in 3-D?.

3-D is annoying and cumbersome and adds nothing to the story or plot.

I was nodding in agreement, but then thought longer- how does foley add directly to the plot? or makeup? or lighting? One might argue that they do so indirectly, but really are all about the recipe that mixes together to create the context for a plot to take place.

It got me thinking of a young Australian I met on one of my flights recently, He was in construction, as a plasterer, but talked excitedly about working on the set of a movie being shot on the Gold Coast of Australia that was using Avatar-like technology. He shrugged off “all I did was build steps for a scene”– and one could ask again, what does this guys plaster have to do with the plot?

I don’t think you can dismiss 3-D because it is not part of the plot.

Come back and talk to me when you have a universal standard and I don’t have to wear any damned glasses.

I agree that putting on the glasses adds to the sense of looking at something rather than being in the space, but there needs to be some device to generate the visual offset that creates the 3D affect. Again, during Avatar, I pretty much forgot I was wearing glasses.

But what I started thinking about that what we have seen so far is not really much 3-D, like maybe 2.4-D (?). What we get is looking at a 2-D screen where some elements appear to poke out and move towards me slightly, but its really not going too far out from the 2-D plane.

Now to me, a 3-D experience would be I am sitting in the middle of my living room, and the scenes would take place all around me- in front, to the sides,m behind, like sound can do now. And maybe I could navigate my way to different scenes?

But that again is not all that different from some of the 3-D game experiences. The thing about a movie (or a book) is that there is a narrative trail, a direct we follow or are lead. Most of the time it is in chronological sequence though this has been cleverly hacked. That narrative element seems important to me, even if allowed branching, because that is what makes it a story.

So I am trying to speculate what a plot would look like if it really was a full 3d experience.

That is as far as I got.

I remain on the skeptical side and seeing it like others as more of a gimmick; I am quite fine with a well developed story on a 2-D screen (or page)– they always work well when they can suspend your beliefs that being the power of story.

but hey, I would not mind being wrong at all. Bring it on 3-D… maybe it will convince me to sign up for cable.