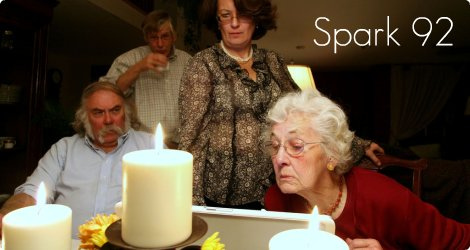 If you were there in the heady first days of the graphic web, when there was but one browser, there was an easy way to know what was worth looking at on the web- there was a simple daily, human edited source. One web page covered it all. No search engines, no social networking.

It was so new, that anything (almost) was worth checking out, and ne could keep a relatively small number of key sites in a mental list.

You know how that went. Very quickly the volume expanded so much it could not be contained on a page. Manually.

Is that happening with MOOCs (Massive Online Open Courses)? Someone will shoot me down on that, and I dont think it is, but there are now more than a handful happening, and of course, its harder to know them all. Is there a list? a Directory? Is it moving to fast to know them all in your head? That would be a good sign to me.

The thing is many of the ones so far are very “course-ish” which makes sense (it is a “C”) in the name, with the regular syncopation of a syllabus, assignments, lectures via synchronous tool. Jim Groom’s digital storytelling ds106 is busting that mold quite a bit; as there is a lot of room for the un-expected, e.g. the new ds106 user contributed radio show.

As you may sense I am most interested in the second “O”, hence my participating in the last year with Gardner Campbell’s networked faculty development seminar, here 3 days short of a year when I first wrote about it.

It sprang out of his suggested idea about creating some way to have a networked reading group, a way for people to convene around important written (or heck, just published works) in new media (whatever that is).

This melded into the Spring 2010 extension version of a networked seminar based on one he ran on the ground at Baylor University, where he convened faculty to hold weekly discussions around key papers from the New Media Reader. Our idea was to fold in a way for people remotely to participant by doing the same readings as his group, and to share their thoughts. ideas online, then via maybe tags and a lightly used forum.

My part was meeting with Gardner weekly to record a podcast, that we published on an NMC web site, and we did pick up a god number of people who participated remotely. I was lucky to attend once in peson during a Texas visit, and secondly via Skype.

I wanted to illustrate how we have evolved this structure over 2010 with some drawings, and knowing my crappo diagramming skills, I am pleased to bring you iPad sketches created by Rachel Smith, special special friend and now former NMC colleague- she drew this one to symbolize Spring 2010 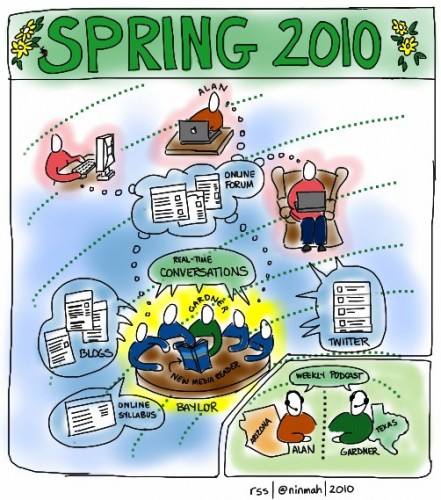 Yes, though it has not been yet widely announced, Rachel is now devoting her full time energy to this visual craft at a new position with The Grove Consultants, in San Francisco, where I am sure she will rock the graphic world (read more on her blog and check out her work on flickr). Okay, I am a serious fan boy.

So there was the primary unit was at Baylor, with a small orbit of individual activity around it.

That was version 1. In the Fall of 2010, Gardner’s idea was to truly follow the Engelbartian spirit and make this seminar a network of networks- we recruited people to form their own local groups to convene around the readings, and we expanded to strucutre “out in the ether” with a number of active groups across the country (see seminar wiki). Each was encouraged to have participants blog their reactions, questions, ideas, and we created a netvibes portal to try and be a dashboard.

Here is the visual version of the second iteration 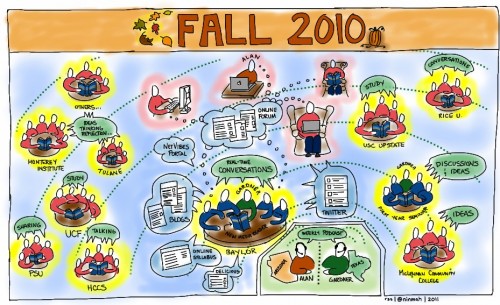 We may not claim it as a raging success; a few groups faltered, ran out of energy, but there is a lot more to make the glass half full than empty.

But in reality, it did become a network or networks- Gardner is pretty adamant reinforcement about not wanting to make it highly centrally controlled, so thus, a lot falls on the local facilitators to keep the energy going. The online forums were rather lightly used, and our mutual travel schedule made our weekly podcasts a bit more sporadic.

This week we intend to launch the 3rd wave, and we have some more groups signed up. I dont have a link yet, as we are working one what should be more of a single “hub” home for seminar info, a new blog site that should appear soon. We also intend to work a bit more closely with the facilitators from each site.

As much of an online nerd as I am- I really see the value in this being the that happens for a group of people to meet locally, face to face. The discussions I got to see at Baylor were magical, and Gardner deftly steers it over the weeks to be something the participants own. We both agree that personal blogging, reflecting is key (as it commenting and readin other people). This is in some places an uphill battle at places, and we noticed a lot of sentiment that participants feel like they need to be high brow academics and say something eloquent and deeply analytical about the essays, many of which can be dense readings.

We see it more important to just read and pick key passages, and post questions rather then answers to try and poke the connections to their own teaching, interests, or just drawing relations to modern life.

Even if you do not have a local group, it is certainly very viable to read as many of the essays as you wish, and to blog/discuss/ respond in the network.

Look for some more info from Gardner or I this week- and yes, we are almost making it up as we go. But there is a plan. Sort of.