From Tokyo we are seeing a nice ds106 activity surge in the Haiku It Up writing assignment created by Shinichiro- what is most lovely is how the author has elaborated on the meaning and structure of haiku beyond just the syllable forumala we learn in grade school here in the US.

Haiku, known as the shortest form of the poetry in the world, originally started in the 17th century in Japan. It became international in the late 20th century and now people all over the world make haiku of their own. There are several rules in Japanese traditional haiku and many of them are also adopted into the international haiku. The common rules are:

ãƒ»Use three lines of up to 17 syllables.
ãƒ»Use a season word (kigo).
ãƒ»Use a cut or kire (sometimes indicated by a punctuation mark) to compare two images implicitly.

People often think that to express one’s feeling in the 17 syllables is enough for making haiku, but it’s not. The most basic concept of this poetic form is to resonate totally different imagery (often presented as nouns) and generate a new perspective/context/atmosphere/situation of the moment based on these imagery in the reader’s mind.

Okay, I am game. The ds106 assignment for Haiku it Up is

For the writing assignment, take a random Dailyshoot photograph and create a haiku using that image. Let the image inspire you to create a poetic haiku. Don’t know what a haiku is? The most common form for Haiku is three short lines. The first line usually contains five (5) syllables, the second line seven (7) syllables, and the third line contains five (5) syllables. Haiku doesn’t rhyme. 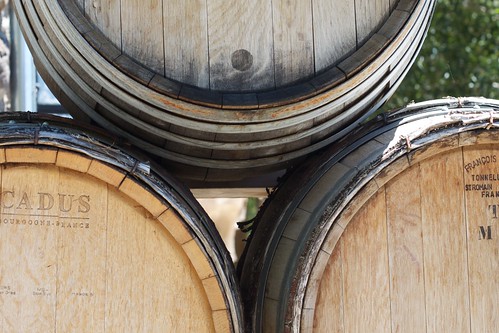 My two nouns are “barrels” and “space” (and have no idea where they fit in the Japanese seasons). I was thinking that in a scene like this we tend to focus on the objects, what is in the positive space, and the wonderment of what is inside the barrels, yet that bright light and the shape of the between space was really the thing that drew me to take the photo. This leads to my attempt to inquire how often we put attention on the negative spaces, the places between what we see and do.

I could have chosen a random dailyshoot from the big pool, and I have not done my own since a few months ago, but I was curious to use one of my own. This is how I used flickr to find a random image. I use the URL you can use to generate a flickr badge or widget- http://flickr.com/badge.gne. I selected an HTML badge and in step, for content, chose an image from my photo set where I stored all my dailyshoots 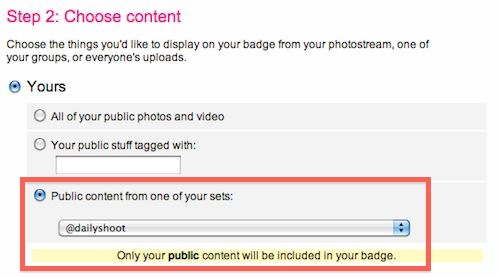 In the layout step, I select 1 image, and the option for random. The size does not matter, but bigger gives you a better look at the image: 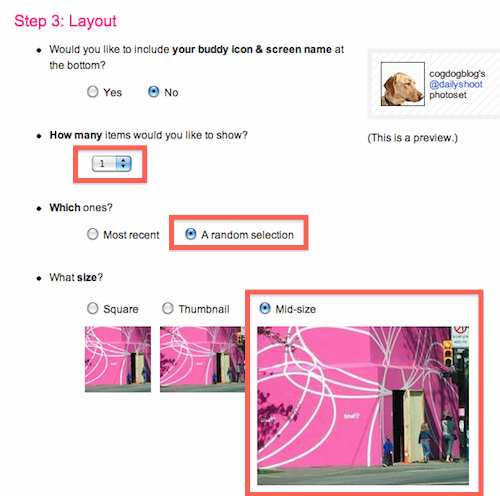 Finally on the Colors screen, we see a random image as a preview. I can just command click it to open it in a new tab. That’s my photo! 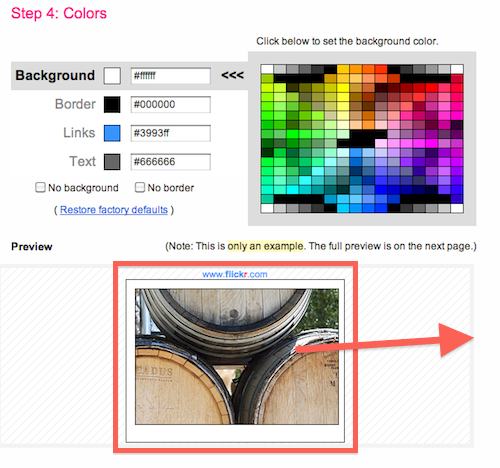 There is probably an easier way, but this is how I did it.

What a great assignment to take something as simple as a haiku, add in the photo element, and take the haiku beyond just the syllable counting. Aiming for the nouns to contrast is really where the mini story comes into it.

You sitting there reading
This blog post on the internet.
Make some art, damnit!