In her post, Giulia put out the challenge to remix her work, and I could not let that slip by, here is my Rhizomic Remix / Wondering

Like most times, I started with about 1/8 of an idea, nothing planned on paper, but let the media I came across nudge me. The first was coming across references to a piece of audio equipment called The Rhizome:

So I took a clip of their video and used the music as a back beat. The next idea was to inject a bit of lecture video, and sure enough there are plenty of stand and talk videos on “how roots spread”.

I settled on this “My Tutor Buddy” bit Plant Structure: Roots, Stems, Leaves, and Material Transport. I’m noting despite all of the head long rush into video as a form of media, the message has not changed- people standing in front of chalk/white boards talking at us. That is another rant for another day. My next plan was to insert stills of my own photos of various trees and plants, and do a bit of voice over. On a whim, I added a newer and relevant music track– today on ds106 radio, David Kernohan was playing “request radio” taking songs via twiter and playing them live on electric guitar, and there he was, playing Pinball Wizard.

and bam there it was- that whole thing with his music felt totally rhizomagic.

But that’s just playing with the remix. The real work is to do some thinking here. And I completely love and respect Dave’s passion for rhizomes, and as a metahphor grokker, I can dig it. It feels right as a model for networked learning, yet… I just do not know what to do with it.

To me anything I would call rhizome-like is totally beyond the bounds of structure, course, learning. It is the land of sweet serendipity, the places of potential where ideas bubble out of and bounce across the root system. Every time we starte talking about in a context of learning/school./education, it starts to feel like some freakish plant system grafted on to something else.

I spent some time Saturday exploring a precious area of florida swamp with @colemama, and was trying to think about the way cypress trees grow, with their limbs stretching down into the water (or so it seems, maybe te reach up), and forming these intricate connected systems of roots and feeders. 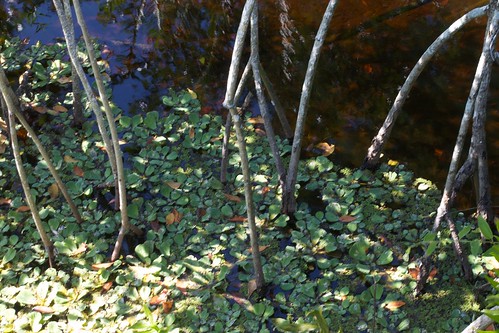 Rhizomic? I need a plant expert. Marie also showed me Cypress Knees, which seem to have that interconnected structure– Wikipedia’s explanation is a bit raw:

Knees are woody projections sent above the normal water level, roughly horizontally from the roots, with a near-right-angle bend taking them roughly vertically downward into soil, usually passing through water first. One early assumption of their function was that they provided oxygen to the roots that grow in the low dissolved oxygen (DO) waters typical of a swamp (see also mangroves, which have similar adaptations), acting as pneumatophores. However, there is little actual evidence for this; in fact, swamp-dwelling specimens whose knees are removed continue to thrive, and laboratory tests demonstrate that they are not effective at depleting oxygen in a sealed chamber. Despite the fact that there is no expert consensus on their role, the supposition that they are pneumatophores is repeated without note in several introductory botany textbooks.

Another more likely function is that of structural support and stabilization. Lowland or swamp-grown cypresses found in flooded or flood-prone areas tend to be buttressed and “kneed,” as opposed to cypresses grown on higher ground which may grow with very little taper.

I struggle a bit woth the biological metaphor as the root systems are ones that develop to server specific needs, and do not seem to have their own interests as a motivator, well I guess they do in terms of survival. But while they are interconnected, they suffer from a physical limit of connectedness that we are free of in the electronic space- all roots are equidistant, or equic-close in the digital space.

And that is powerful.

So in the end, I am eager to hear Dave, who may be the first speaker to lull me into participating in the MoaM (Mother of all MOOCs).

Whatever the case, I maintain we need more Pinball Wizards.