Today was another treat to hang out here with Rowan Peter as we had a few adventures in the Melbourne CBD playing theremin, opening the StoryBox, and pleading with some Canadian to come ice skating. It was so nice of him to take a day off of work (though that seemed to be a bonus) and also to prop me up via hotspot tethering all day from his mobile phone.

We did a snatch of live broadcasts on ds106 radio, though I learned a lessone I did not know- if there are no listners, then the twitter bot does not go into action, so I should have tweeted out some advance notice rather then counting on the stream info being relayed. 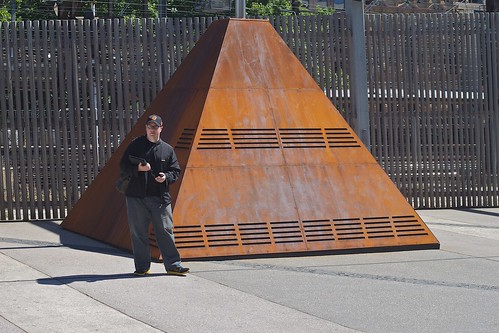 Stop one was the Giant Theremin I had visited last Monday. We played around there bout 15 minutes doing a live broadcast. It was interesting to watch a number of people walk right through the trigger zone, just tilt their head, and keep on walking. Even when a throng of school girls went by, and we asked them to try moving around, only about 3 or 4 actually did- most just stood there still and gawked.

So I agree it may not truly be a theremin (a commenter on my YouTube video called it a “Terpistone“) because it is movement via video that generates sounds via a computer program. There are theremin type whistles, but also percussion sounds and piano runs. But it is unpredictable.

I will have some audio to post here, but it may take all night to upload given the slow crawl of my hotel internet.

Next was a stop for morning coffee in one of the cafe lanes off of Flinders. We ducked into one of the colorful graffiti of the Melbourne Lane Ways, which seems to offer an enlightened urban view of graffiti art in allowing high end work, that somehow co-mingles with more crude, and they all co-exist (or so it seems) 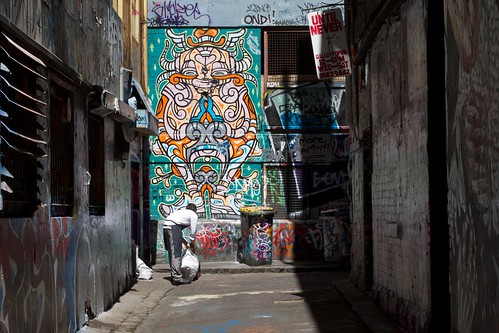 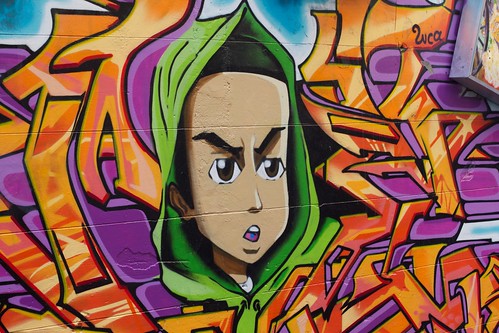 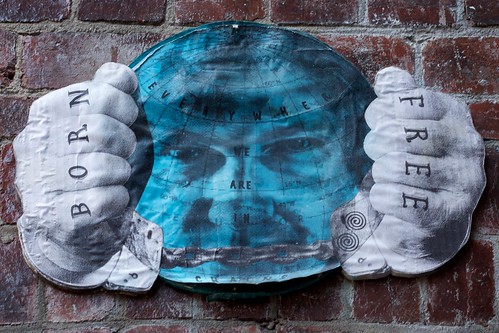 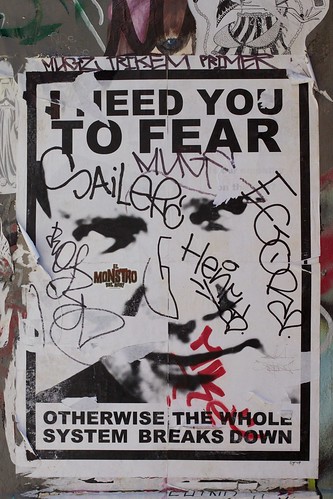 We then wandered to the Sofitel Hotel, where a perhaps lesser known fact is that on the 35th floor, there is a mens room with a glass wall view of the city. 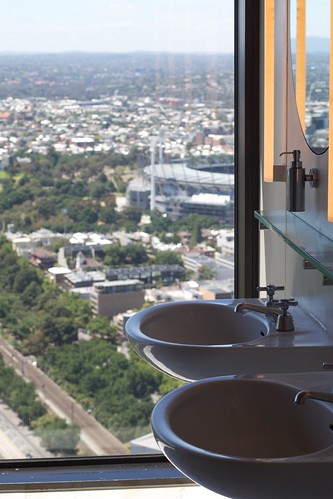 Go figure. I got a panorama shot there.

We then went towards the Victoria Public Library. I found two 106 photos within 100 meters of each other.

The guard at the library looked in my backpack, but did not ask about the metal box with all the stickers. We set up the StoryBox for a while, but got a little bored waiting for action. 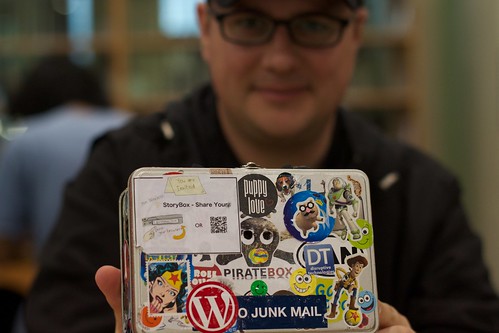 Our stomachs growled so loudly, we had to leave and get lunch. Rowan picked out a delightful Greek restaurant (there were three within the same black labeled “authentic”). They were serious at this place about their lamb: 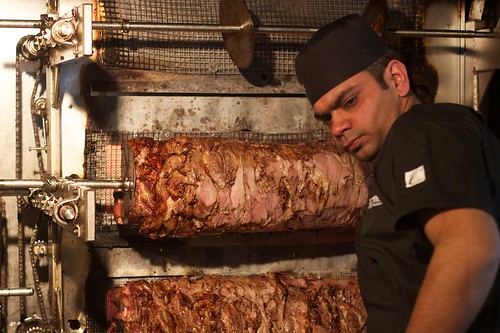 We then hopped on the free City tram (where I got some great international banter recorded as an audio file for the StoryBox) over to Docklands, where I had walked last week in my vain attempt to deal with my Optus sim card which does not work with my phone for data access.

Our goal was to go get a photo and do a live broadcast in front of the Melbourne Icehouse, the Winter Olympic training facility that features 2 ice rinks. Now Rowan has a serious honest hope that some people are making fun of. It got bizarre when @noiseprofessot turned on his photoshop… 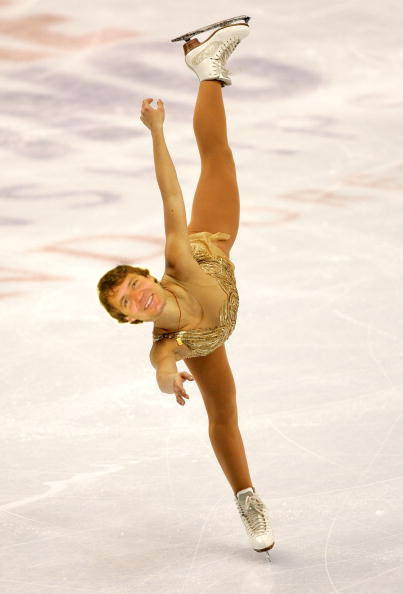 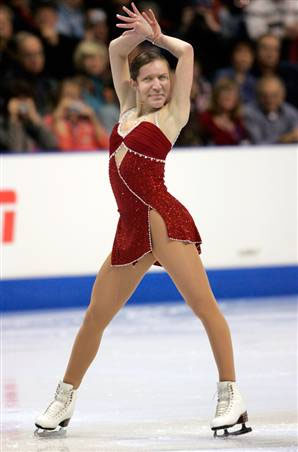 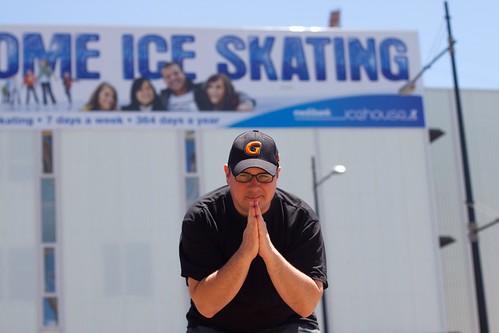 Rowan is a big hockey fan (he has like 19 jerseys), and knowing that George Siemens is an ice skate fan. Rowan has a hope that if George should get an opportunity to speak or visit Melbourne, that he could show George this facility, and maybe go skating, do a little “Stick and Puck”. This is purely out of Rowan’s respect of George’s work and an interest in showing him a unique side of this city.

We did another ds106 broadcast that explains all of this- look soon for the archive (as soon as this @$#% slow hotel internet finishes with the photo uploads). Make sure george knows about this humble request via the hash tag #SkateWithGeorge

Alas is it all for naught? will coffee do? 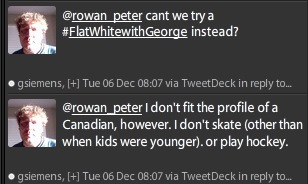 After this excitement, we took the free city tram again back towards the FLinder Street station, and had some coffee from possibly the universes most bored barista. We seemed to be a weighty burden on The Coffee Dude. We then wandered a bit more aimlessly through Federation Square,a cross the river through Victoria Gardens, and back again to where we had left Rowan’s car.

All in all this was a top notch day- beautiful blue sky weather, photographic scenery, lots of strange cats and dolls on the street, and a whole lot of laughs and great talk with Rowan. I can vouch for him, George, his is a top notch host! – just see his bonding with his son 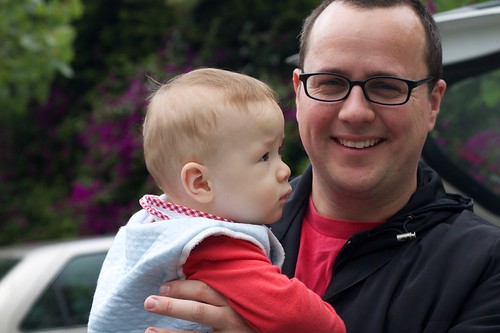 Thanks again, Rowan, you sure showed me the highlights of Melbourne.