I felt I was overdue to sit down and do a ds106 assignment, one to do some iMovie work as a demo for our current students. I was called back to do Return to the Silent Era (one I added myself) with the hopes that I could push iMovie a bit farther than the last one I did — 2001 a Space Odyssey set back 100 years.

The dawn of cinema had no audio; silent movies created an atmosphere with music and the use of cue cards. Take a 3-5 minute trailer of a modern movie and render it in the form os the silent era- convert to black and white, add effects to make it look antiquated, replace the audio with a musical sound track.

I was trying to think about what would be interesting to set to silent era- it’s easy to look to science fiction or movies from the future. Too easy. I combed through my video drawer and saw the Dirty Harry disc there, and said hmmm, the opening action sequence that defines Harry’s character, his lunch ruined because of some criminal activity that just lands in front of him, the first of the “Do You Feel Lucky, Punk” lines would be fun. It’s the whole juxtaposition of the same lines played out at the end that defines the criminal mind of Scorpio.

The look of the original film had all the stampings of the 1970 era (filmed in 1971), the big cars, mutton chop sideburns, the semi flattened lighting, the lingering feel of the hippie era– all of this seemed interesting to try and take back to a different era via the silent film treatment. Would Harry be as tough with that big gun back in 1908? Would his isolationist character command the same results?

I started by making up my title frame in Photoshop, starting with one I found out there. I wanted to add an icon, so I pulled apart the top figure to leave room to insert a 44 Magnum: 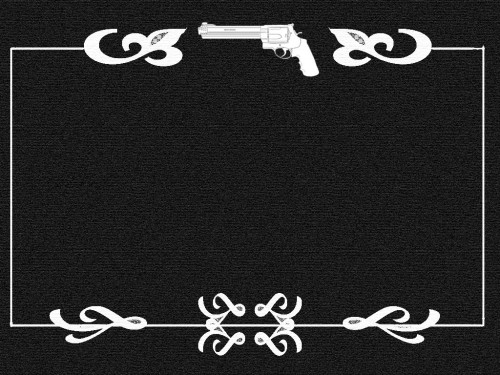 I added some noise and cracelature filter to make it a little more dirty.

Here is a snapshot of my working area in iMovie (this is iMovie 11, so some of the tools and menu names are different in earlier versions): 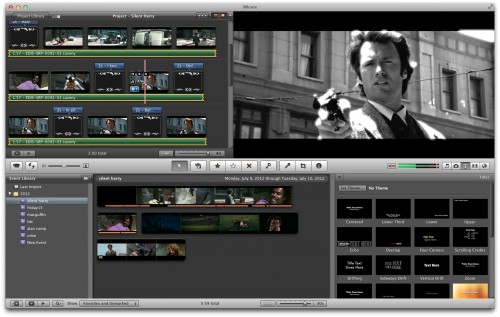 After loading the clip in iMovie, I first dragged the graphic for the title card I made to right in front of the video clip. I use the small on the clip to go to clip effects and added the “romantic” one which made it glow. 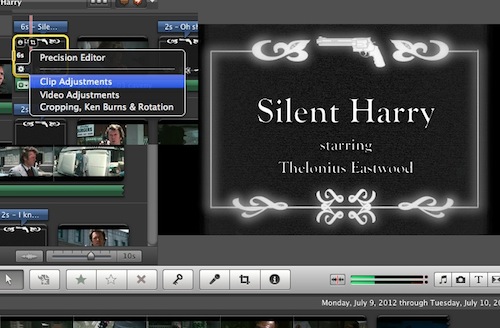 For the text I dragged the Center style right onto the frame, and added my text. By highlighting the text, and selecting “Show Fonts” I switched it to “Goudy Old Style”. Later I will show you an easy way to replicate this.

The next steps are going through the clip and making splits on key segments. These include points right after some dialogue that I want to add the title cards, pretty much in this case, all of Harry’s lines. To break up clips, just move the cursor to the point where you want a split, press control to get the contextual menu, and select “Split Clip”. I also split in places where I knew I might want to have different clip speeds.

COpying the title card is a matter of clicking once to select its frame (it lights up yellow) and then command C to copy. Move the cursor just to the right of another split to paste a copy of the card.

Then for the title, click an existing title (the blue bar above), and press the option key and drag it until it drapes over the entire new card (the blue should fill the rane, my screen shot is off a bit). This will make a copy of the text track with all the same settings and make it fit in the same length of time as the card.

You might have to mess with the font size to make things fit.

I did this for all the dialogue. Once I had that in place, it is time to remove the original audio. I selected each clip, and selected Mute Clup from the Clip menu (or just command-Shift-m).

The next steps are to give the video the old style treatment; while there is an aged film effect, I dont like it because it does a sepia tone, and it is too bad you cannot apply more thane one effect (like adding a black and white). I have a trick though!

On the small menu on each clip (looks like a gear) first sslect Video Effect, and set the saturation to 0- this makes it black and white: 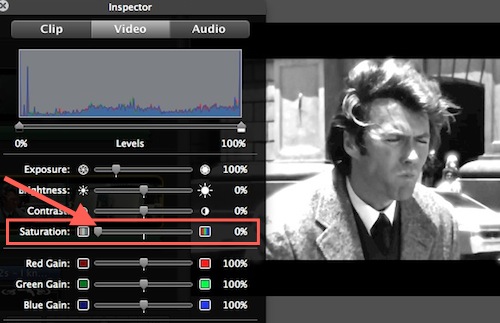 I then press the Clip tab for these adjustments. I found that the “Glow” effect worked well to give it a washed out look, your mileage may vary and the vignette or the Romantic work well. For the action sequence I sped up the clips in various amounts to give it that frenetic energy, anywhere from 120% to 400%. 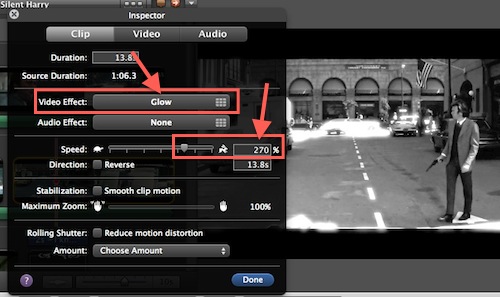 I repeated these steps on every section.

There were a few places I trimmed the clip, and one or two when I needed Harry’s mouth moving, so I would copy and paste a clip of him, reversing it so he would not be an exact duplicate each time.

Once the video was all ready, I went to the Internet archive, and found some ragtime music in the 78 RPMs & Cylinder Recordings collection called Ragtime Echos (1918) featuring Samuel Siegel on mandolin and Marie Caveny on ukulele.

I downloaded the mp3 version and dragged it onto the iMovie track, making sure it lined up below the tracks (so it is not made into a background for the entire project). Here is another trick, since my audio track is longer (you can drag the right and of the clip to extend it as far as it will go) I click the audio track gear icon, and chose “Audio Adjustments”. I set the fadeout to be manual so ti will fade before it ends abruptly.

Thats pretty much the editing. I had planned to do a longer feature, a middle clip of the Harry/Scorpio confrontation in the football stadium, and the closing chase scene which bookends the original. But alas, you get the idea, and the “Do you feel lucky” scene sites fine with me as a single thing.

I wanted to try the trick Michael Branson Smith does to add more effects to his videos by using the 8mm app on his iPhone but alas, I could not figure out how to upload it so the app would see it. I hope it is not as crazy as just filming it off the screen!

I’m pretty happy with the way this turned out, but oh, I stayed up way too late doing this.