Oi, somehow I never published this post, my own answer to my own challenge. I just found it in my unpublished drafts drawer. Bad Dog.

The first rule of issuing challenges is be prepared to remix your own dog food. Thus I find myself tonight working at doing my own creation for the Seven Day Daily Create Challenge. You can see the whole series of related posts at http://cogdogblog.com/tag/7daychallengetdc

Okay, this is not easy. I scanned the 174 entries that came in (actually there are more now than when I summarized), and downloaded enough media I could use (I had to skip a few flickr photos that were not creative common licensed and some audio that were not set in SoundCloud to be downloaded). A theme somewhat emerged, like something bad that might happen if a flame was turned on somewhere in the world, that triggered a few catastrophic events… Here ya go:

This was assembled in about an hour’s worth of iMovie fiddling. I do a lot of splitting of clips, separating the audio tracks, and using multiple audio layers. I found there are audio effects you can apply to a video clip (that was new to me)

I ended up using three things by our long time ds106 Australia comrade, Rowan Peter- his two audio files and one flickr photo just jelled for me.

Dr Coop’s blue flame was the trigger, Melanie’s video for best technology with the flushing toilet got me started thinking about the world swirling down the drain, which leads to tornado swirls. Mayln’s boiling water was a nice build up to the triggering event (whatever that flame hit). Rowan’s recording of a Japanse telemarketing call seemed to be good backdrop for the mechanical parts of the world that might go into an infinite loop. Norm’s static video of for ds106 (along with his audio “just found a TV”) sounded like a post apocalyptic effort to communicate.

Here are the media pieces I used:

makes use of cc licensed ( BY NC ) flickr photo by bitchcakesny: http://flickr.com/photos/bitchcakes/5187928447/ Now that the 2012 Summer of ds106, Camp Version is over, I spent some time trying to pull some numbers from the machine, given how crazy folks are about analytics and massive. First of all, I want to thank all 172,000 […]

Time after time the road out of a blog funk is sitting down to make some silly ds106 art. So it was later this afternoon, when this tweet form Cathy Finn-Derecki set me in motion: @cogdog @twoodwar My God. What a load of twaddle! What's next? Sebastian Thrun on the cover of "Tiger Beat" right […]

My diabolical plan to pump up the activity of the Daily Create seems to be working; The first day of the Daily Create Challenge is not even over, and I see already 21 tornados submitted (the challenge was to draw a tornado). I’ve been growling and calling people out, daring them to do 7 Daily […]

Limited editions of this holistic and cleanly book are available! This is for a brand new ds106 Design Assignment: Weird Book Room: The Abebooks Weird Book Room lists a collection of titles so farcical you would think they are made up, but they are not. “Grandma’s Dead: Breaking Bad News With Baby Animals”, “Beyond Leaf […]

He’s the baddest cop on the streets in 1908… I felt I was overdue to sit down and do a ds106 assignment, one to do some iMovie work as a demo for our current students. I was called back to do Return to the Silent Era (one I added myself) with the hopes that I […]

Here is a new ds106 video assignment based on the notion of going to Camp Magic Macguffin for summer camp, Send a Camp Movie to Camp: Take one of the movies on the list of movies with camp themes, find a trailer for it, and re-edit the audio to completely change the plot- e.g. make […]

I’m late with my ds106 design stuff, but you will not catch me saying I am sorry. cc licensed ( BY ) flickr photo shared by cogdogblog I did assemble this for the Postcards from Magical Places assignment, which we had our UMW students with a requirement that the image come from Minecraft. Design the […]

cc licensed ( BY ) flickr photo shared by cogdogblog With activity ramping up for me at the Northern Voice conference this week, my window for MADI (Making Art Damn It) is closing, hence here I sit working an hour on a faux book cover for the I Can Read Movies assiognment: Create a film-based […] 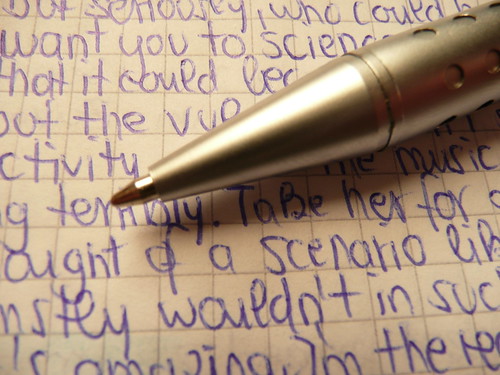 I thought I would write since it has been like forever since I last communicated (literally), but who would understand me better than the dog pal who followed me across the country and then some. You might noy be aware, but I have been away for three works helping run a summer camp called Camp Magic Macguffin – the magic meaning that nothing bad happens here and the people who come just want to create, create, create art and funny animations all day long.

In a way I wish I was a camper, because then you get to play. But I also have to work .My colleague Martha and I have much to do with orienting our UMW students to things like WordPress, creating course materials and videos, running live camp fire sessions, clearing timber, planning activities, etc. And we have to make sure we review and give feedback all the time.

It’s a good thing we have the grooviest bunch of counselors to help us out, especially people like Ol Hatchet Jack, who sounds threatening, but has been super helpful, Cheryl Colan that fun do Wop Girl, Giulia Forsythe, our drawer and mentor extraordinaire, Sergeant Pepperstorm who has been building like crazy in Minecraft (along with Ben Rimes). Tripper Harrison has been running live music over the PA system, and Zazzy, who seems to be questioning me all the time, has been a champ at commenting and doing innovated creative work herself.

And then the open online aprticipants! Woah, I would break my hand trying to cite them all, but we have about 50 whoa re active- you can see all the camper blogs here http://magicmacguffin.info/subscribed/