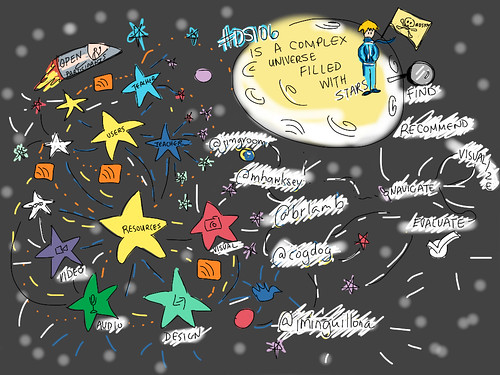 DISCLAIMER: This is mostly a brain dump. Little coherent ideas emerge. Typos will occur. You have been warned.

This session I participated in at Open Education 2012 was proposed by JuliÃ  MinguillÃ³n titled “Analyzing and supporting interaction in complex scenarios: the case of DS106” – the idea as JuliÃ  outlined it was to try and find useful patterns and meaning in the large amount of networked activity that happens in this universe.

I’ve been interested in this for a while but ow sure how to wrap my arms around it. Because of the syndication model set up in our site, we have essentially a copy of every blog post that the site has subscribed to since before January 2011 – over 20,000 posts (unlike those other high priced enterprise systems, our open source fueled site actually keeps all of its content).

Within the wordpress database is a lot of key information- when and how often activity happens, what kind of link relationships there might be, possibly an ability to connect to twitter or commenting actions as well. But more curiously, the only way we represent the things that go on here are the old school reverse chronological listing of posts, something that is a river when there are 500 blogs the site attends to. One thing I would like to know is if there is a more visual or meaningful way to represent all of this on the front of the web site?

As JuliÃ  wrote in the abstract:

… visualizing all the activity around DS106 is not a trivial issue.

Interaction in such a complex scenario implies receiving information from multiple channels and maintaining a personal collection of resources, as the course has a very flexible structure so students can focus on a particular subject according to their interests (i.e. visual assignments exposed through flickr) and/or enter and leave the course at any moment. Regarding people, maintaining a network of colleagues implies maintaining multiple identities through the ds106 site in itself, but also twitter, blogs, and so. The totality of DS106 is a very complex learning scenario which is the result of hundreds of personal infrastructures hooked up to the ds106 blog.

We would like to discuss how interactions in this networking infrastructure can be analyzed in order to support all the elements (students, resources, comments, assignments, etc.) so additional services can be devised and implemented without interfering with the natural flow of the course.

With only 22.5 minutes, it was a quick journey through this universe- here is the prezi we used

Analyzing and supporting interaction in complex scenarios: the case of DS106 on Prezi

In trying to show how ds106 is arranged, I showed them a diagram I had sketched that was deliberately hard to figure out, because ds106 is a messy space, and making a neat clean diagrams of balls, arrows, and labels does not fit the reality:

In this universe, we have links that students do not think always to add to their posts, tags typed wrong, blogs that vanish, an irregular pattern of whether content is tweeted or not.

Our basic google analytics shows that in the past year, the ds106.us site has welcomed over 27,000 unique visitors 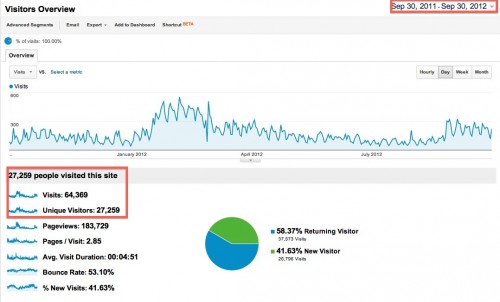 Fortunately we got some help here from Martin Hawksey who has been doing wizardly work with harnessing networked information and creating useful tools for parsing and visualizing it. To track the twitter action, in July he set up one of his twitter tag archiving spreadsheets for #ds106 (learn more about this tool it automatically updates the archived tweets and generates summary information).

We can then run this through his Tags Explorer and start “seeing” the universe of #ds106 in twitter: 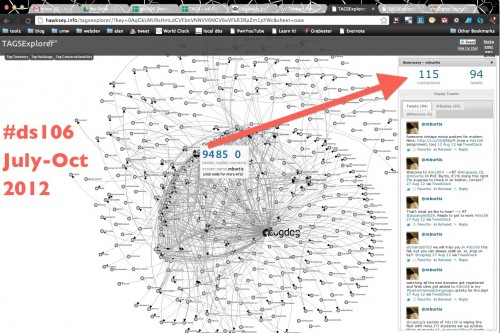 But there is a lot ore. I provided Martin a database dump of the entire ds106 site (some 600 MB of stuff) that he has just started analyzing that he has been running through with tools like Gephi and NodeXL. Looking at the link activity, we can see a complex universe, as Martin notes “Whilst this is pretty, it’s also pretty useless.”

It was a bit hunorous during my first Open Ed presentation on remixing assignments in ds106, Martin saw this was going on and managed to get Brandon Muramatsu to ask me to show some of the data slides martin had just sent me:

@cogdog thanks for letting me nudge you along! best quote was "oh he's got slide notes" @mhawksey –& sneaky fellow auto-tweeting on slides

I really managed to wave my arms over after having a short preview with martin on Skype before I left for Vancouver. In fact his first sharing had that ket phrase again:

But with the next refinements and some explanation, Martin showed he was able to pull out like what could be signature link patterns around a single blog post, there are inward and outbound links, some from the same blog. He is able to identify the top posts in terms of “betweenness centrality”

And if you really want to see it in action, Martin used a tool typically used to visualize changes in software versioning called gource to put together a time-based sequence showing blog posts, comments, and twitter activity in the universe

In the discussion, maybe blinded by the heat of the stars, there was some interesting commentary. Sheila MacNeill asked frankly (and I may not quote this right), while it is interesting, this is something we ought to be drawing conclusions from? Does it really show the relationships that are happening?

And David Wiley has asked if there was some potential to try and draw out some of the things in twitter that might be attitudinal – when people use words that represent frustration, joy, accomplishment, (the opposite) in twitter, can we tap into or map the mood?

As it sits, we havemany more questions than Big Analytical Answers here. We have a large blob networked activity matter, and we have data, and there is likely something in the patterns there worth sussing out. As someone in the middle of it, I am able to provide context for what some of those squiggles mean. I really want to thank JuliÃ  for setting this up as a question and Brian Lamb for infusing some perspective as well.

Meanwhile, as I sit here trying to ponder the ds106 universe, that sucker keeps expanding- what do we make of it? 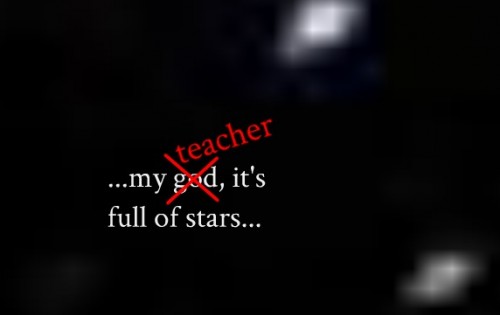