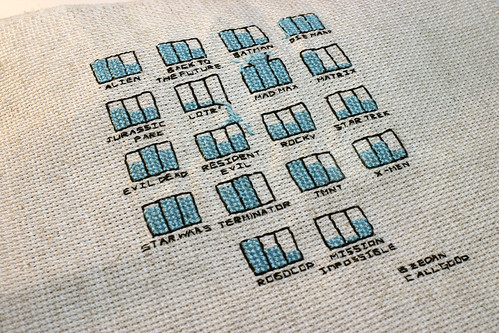 Ripping the page out of the Jim Groom playbook (again), and as I did when I taught ds106 the first time last Spring in parallel to him, here I share the class evaluations from the Fall 2010 section of ds106.

Frankly I love this idea- why not share and reflect on these things; why leave this stuff to some outside source? (where you don’t get much on me anyhow).

First of all, I would think we have some gut level instinct how we did. And the numbers for my teaching in the Fall 2012 (online) are notches higher (0.1 to 0.3 points per 5 point rating) than from Spring 2012 (in person). Was that the difference? Probably not. Spring 2012 was my first time teaching, and I had a round of teaching summer online. You ought to get better each time through, right? Refine, revise, etc?

Also note that it looks like the return rate last Fall is only about half. I think I was supposed to remind students to do these? Huh? 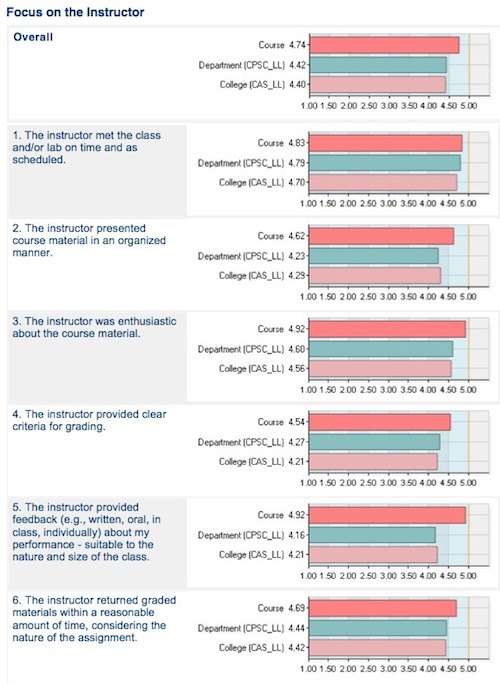 I do wonder how much weight to put into the bars and charts- a lot when it is praise and less when it might be critical? Nah. 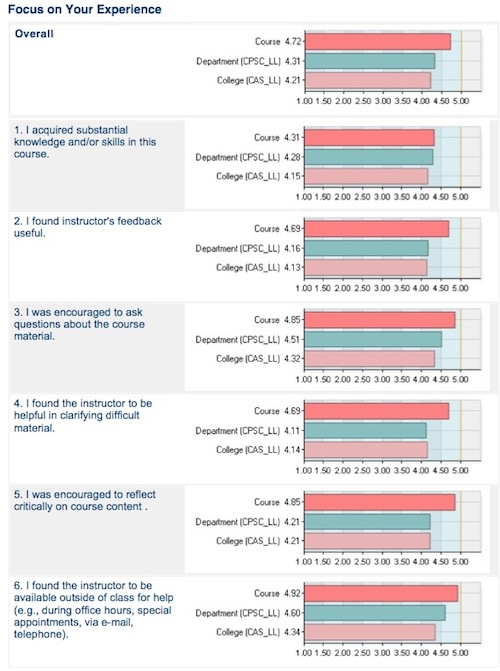 Frankly, I could leave all the bubble questions behind and just do the comments. The commons thread, as usual, is how much work the class is.

Really interesting class, didn’t expect it to be so much work with all the other classes I was taking. It actually challenged me to work on the computer and not just be on facebook. Alan was a great professor who was always available when you needed something.

I might count that as a major victory if I helped a student spend less time in Facebook.

This is one of the most stimulating, challenging, and rewarding classes I’ve ever taken at UMW. The amount of work I’ve produced and the amount that I’ve learned, not only about how to create across multiple digital mediums but also about HOW I learn, has been invaluable to me. I feel like I can use the skills I gained in this class to enrich any career I choose to pursue, and it’s a great way to familiarize students with different digital mediums and social networking services, and to challenge students who know them well. The feedback and especially the encouragement from my professor was especially important to me throughout the course–I felt like even if I didn’t meet my own expectations for myself, all of my efforts were useful and every attempt meant something to them.

That idea, of a student reflecting on their learning beyond content but learning about their learning? I do not think I was ever this meta reflective as an undergraduate student.

Of course for the future, some students did not find the skills very useful…

The instructor was great. He provided very helpful feedback and always encouraged more thinking and creativity. However, there was a substantial amount of work for the class. I felt it taught me some computer skills, but nothing I could see myself using in the future.

I am going to count on that maybe changing lately. But I also have to consider that its true- maybe being creative in digital media has no use (for some people).

What an amazing class and even more incredible professor. The network that is being built even within this class is beautiful to watch develop. My skills in handling digital technology, applications, software, etc. has grown confidence within me using the computer and also by bringing in what I know into my other classes. This class has also found a way to integrate my thoughts with others and it’s not a competing time to just suck up to a professor in class hoping for a good grade. I work for my grade.

I don’t think I even have to comment on this one.

I find it quite difficult to rate the professor for an online class.

I think that Professor Levine’s grading was hard. The first week of DS106- we were thrown a bunch of things that we had to do (ie: Create twitters, create a URL, create the blog itself), While it was all time intensive, one small error would cost you your grade for that week. Respectively, for the following weeks of the class. While it is understandable that since there is not class time, it is made up in the amount of work to complete, it seemed as I spent WAY more than an 7 hours a week on this class. Between going to classes and the work assigned to those, I only spend on average 4.5 hours a week. Without saying, the work load was extremely intense and stressful. Also, for someone who doesn’t use twitter, using twitter as the mean for communication, was difficult.

I find it interesting that someone think it is difficult to rate a teacher in online class. I wonder why.

We did put a lot on students in the first two weeks of class, we called boot camp. In the Fall, this counted for 10% of the class, but no one got heavily penalized for not setting up a social media account. I am not sure where the difficulty was in using twitter, but I never made that the only option to contact me.

However, even before getting this feedback, I decreased the weight of the first two weeks from 10% of final grade down to 5%.

And this person did tack on at the end “As a positive, Prof. Levine was always available to help you through email, chat, Skype, etc… even if he was 1700 miles away. nonetheless, you gained substantial knowledge in this class!”

This has been the best class at Mary Washington I have taken so far. It is innovative, unique, fun, and I have learned exponentially. The best thing is that there are several grades in this class that even out, so if a person has a bad week it doesn’t kill their grade and GPA. Other classes at UMW have a serious problem of only having 5 grades that turn out each to be major grades, so the student is dependent on knocking each assignment out of the park (talk about stressful). Professor Levine is extremely helpful in this class, and always makes himself immediately available, and is quick to get back to you on any questions or concerns via e-mail, Twitter, Google Hangouts, Skype, etc. (so much better than that Starfish meeting garbage).

Grading in a class like this is an interesting challenge. It’s really not a grade on someone’s artistic abaility, and repeatedly I provide feedback and direction that creating the media is only part of te grade- writing and sharing the thinking and the process behind it is to me as or more important than the thing made. But students are so conditioned to get graded on the things made and not the thoughts shared.

We give no tests or quizzes in ds106. There is no mid-term, no final. It is all the regular process of creating and reflecting we look at.

That said, the way Jim and I graded in the Spring 2012 was rather holistic. We did have a percentage system for participating, audio group project, final project, creating assignments, but the weekly ongoing stuff was graded rather cumulatively at the end. I would suspect students did not know where they stood in the class – we did have mid semester 1 on 1 conferences (which I miss in an online class, its not impossible), but they were more checkins and general affirmation of standings.

That’s why I really valued the idea Martha had for out Fall 3012 classes to do the unthinkable; use the LMS for what its good at- grading. We set up Canvas assignments with specific dates (weekly) that students had to turn in a URL for a post on their own blog that was a reflection and summation of the work they did for a week or two weeks. Canvas works great here, because it makes a snapshot of the web page at the time, and since there are points given to each reflection and other item, and a percentage weighting that matches our grading criteria, students always could check where they stood.

Plus the comments offered another venus for direct feedback especially if it had to be maybe more critical than I might do on a web page (although I cannot say I did too many like that).

For me, it was a more even way to check student work, because each week I was looking at their work side by side. It was a lot of work to review and get those turned in (my ability to do this in a day after they were turned in slipped into 3, 4 , 5 days later).

Participation is another problem area for me. I have a good sense how much people participate in commenting on each other and in twitter (because I am everywhere in this course), but the last thing I want to do is coming up with a grade chip based on how many comments per week.

Awesome course, really opens up students to digital design and its many forms. Class is week by week which allows students to complete at their own pace, yet still has structure.

I had never taken a course like this before, but I really enjoyed it. I liked that all assignments were given at the beginning of the week, it allowed for me to schedule this class’s assignments around all my other work and activities. I am with out a doubt glad that I took this course

This is how an online class should be flexible for someone’s schedule, right? And learning to define one’s own pace is a worthhile outcome IMHO.

This is a good course, but it is a ton of work, and I think the guidelines for grading are a bit too strong for a 106 level course. However, it is different and gives a break from the traditional class routine.

That is interesting that this person says the grading guidelines are too strong (not the workload) for a 100 level class. I am not even sure the level here means anything (?) In my current class nearly all my students are seniors; 2 are juniors, and I have one sophomore.

Well, of course, I feel good about these, they are positive. I cannot say that evaluations really motivate a great deal of direction to me, so far, they have matched my own self evaluation.

But I cannot see a reason why a teacher would have a problem in sharing openly their student evaluations.

Unless they are that horrible.